Falwell Was an “Agent of Intolerance”; So What Is Palin?

Posted on September 9, 2008 by wallwritings 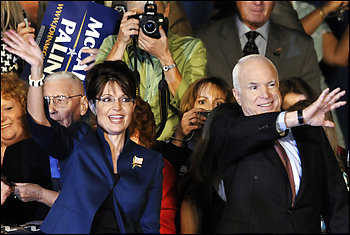 I have no friends who are radical Christian fundamentalists. Like fundamentalists of all religious traditions, they are intolerant of non believers and dangerous to the public well being. They do not seek my friendship; they seek my submission.

On the other hand,  some of my best friends are non-radical Christian fundamentalists. They are my friends because they are tolerant, loving and supportive of folks like me who hold religious beliefs they believe fall short of the True Faith.

Does John McCain know, or even care, that some fundamentalist Christians, like fundamentalists in other religions, sometimes morph over to the Dark Side.  Could this be true of Sarah Palin? Could she be a radical Christian fundamentalist?

Not a single voter passed judgment on a woman who could become president should a 72-year-old president with a history of cancer, fail to survive his first term in office. In his campaign for president in 2000, John McCain called Christian fundamentalist preacher Jerry Falwell an “agent of intolerance”. Did he measure Sarah Palin by the same standard?

Is Pat Buchanan, long time conservative Catholic activist, journalist, and TV talk show fixture, excited by Paln’s race?  He sure is, enough to draw this typically overwrought us-against-them contrast between Palin and the Obamas for Human Events magazine:

Barack and Michelle are affirmative action, Princeton, Columbia, Harvard Law. She is public schools and Idaho State. Barack was a Saul Alinsky social worker who rustled up food stamps. Sarah Palin kills her own food.

Michelle has a $300,000-a-year sinecure doing PR for a Chicago hospital. Todd Palin is a union steelworker who augments his income working vacations on the North Slope. Sarah has always been proud to be an American. Michelle was never proud of America — until Barack started winning.

Barack has zero experience as an executive. Sarah ran her own fishing fleet, was mayor for six years and runs the largest state in the union.

Post convention polls indicate that a surprising number of women voters are agreeing enough with Buchanan to  turn to the McCain-Palin ticket. Christian fundamentalists, long excluded from seats of power are overjoyed.

Have Clinton loyalists turned into a giant American Idol television audience that embraces another glass ceiling breaker because Sarah Palin is a “hockey mom” who runs over the big boys? Surely not all of them, but anecdotal evidence spreads that Sarah Palin is the flavor of the next two months for many women who rejoice to see one of their own shaking the fist that has field dressed a moose.

Love at first sight is dangerous for the sanctity of marriage; it has even more serious consequences in the sanctity of the voting booth.   Last minute decisions in national politics are risky, especially so for a political unknown.  John McCain did not vet Sarah Palin.  Vetting takes time; it takes deep background research. Since John McCain did not vet Saray, the rest of us must do our own vetting.

There is no better place to start this process than to pay attention to an authority on religious fundamentalism, Professor Juan Cole, professor of modern Middle Eastern and South Asian history at the University of Michigan. His September 9, Salon essay, What’s the difference between Palin and Muslim fundamentalists? Lipstick: A theocrat is a theocrat, whether Muslim or Christian, draws upon Cole’s extensive knowledge of Radical Islam to make a disturbing correlation between Palin’s Christian Fundamentalism and Radical Islamic Fundamentalism.

John McCain announced that he was running for president to confront the “transcendent challenge” of the 21st century, “radical Islamic extremism,” contrasting it with “stability, tolerance and democracy.” But the values of his handpicked running mate, Sarah Palin, more resemble those of Muslim fundamentalists than they do those of the Founding Fathers.

On censorship, the teaching of creationism in schools, reproductive rights, attributing government policy to God’s will and climate change, Palin agrees with Hamas and Saudi Arabia rather than supporting tolerance and democratic precepts. What is the difference between Palin and a Muslim fundamentalist? Lipstick.

In an article published in Time magazine (September 2, 2008), Nathan Thornburg reports on the influence of religion in Palin’s career:

“We like to call this the Bible Belt of Alaska,” says Cheryl Metiva, head of the local chamber of commerce. Churches proliferate in Wasilla today, and among the largest and most influential is the Wasilla Bible Church, where the Palins worship.

At the 11:15 a.m. Sunday service, hundreds sit in folding chairs, listening to a 20-minute sermon about the Book of Malachi and singing along to alt-rock praise songs. The only sign of culture warring in the whole production is an insert in the day’s program advertising an upcoming Focus on the Family conference on homosexuality in Anchorage called Love Won Out. The group promises to teach attendees how to “respond to misinformation in our culture” and help them “overcome” homosexuality.

Juan Cole recalls that as mayor Palin asked the Wasilla librarian about banning books from the library which some of her constituents said contained “inappropriate language”.  Palin later tried, unsuccessfully, to fire the mayor. Cole notes however, that:

Book banning is common to fundamentalisms around the world, and the mind-set Palin displayed did not differ from that of the Hamas minister of education in the Palestinian government who banned a book of Palestinian folk tales for its sexually explicit language.

Theocrats are believers who want a government run by religious convictions.  Professor Cole reminds us that all theocrats, Christian, Muslim or Jewish, “confuse God’s will with their own mortal policies”. And they can be very specific:

Just as Muslim fundamentalists believe that God has given them the vast oil and gas resources in their regions, so Palin asks church workers in Alaska to pray for a $30 billion pipeline in the state because “God’s will has to get done.” Likewise, Palin maintained that her task as governor would be impeded “if the people of Alaska’s heart isn’t right with God.” Supreme Leader Ali Khamenei of Iran expresses much the same sentiment when he says “the only way to attain prosperity and progress is to rely on Islam.”

Not only does Palin not believe global warming is “man-made,” she favors massive new drilling to spew more carbon into the atmosphere. Both as a fatalist who has surrendered to God’s inscrutable will and as a politician from an oil-rich region, she thereby echoes Saudi Arabia. Riyadh has been found to have exercised inappropriate influence in watering down a report in 2007 of the Intergovernmental Panel on Climate Change.

Neither Christians nor Muslims necessarily share the beliefs detailed above. Many believers in both traditions uphold freedom of speech and the press. Indeed, in a recent poll, over 90 percent of Egyptians and Iranians said that they would build freedom of expression into any constitution they designed. Many believers find ways of reconciling the scientific theory of evolution with faith in God, not finding it necessary to believe that the world was created suddenly only 6,000 ago. Some medieval Muslim thinkers asserted that the world had existed from eternity, and others spoke of cycles of hundreds of thousands or millions of years. Mystical Muslim poets spoke of humankind traversing the stages of mineral, plant and animal. Modern Islamic fundamentalists have attempted to narrow this great, diverse tradition.

The classical Islamic legal tradition generally permitted, while frowning on, contraception and abortion, and complete opposition to them is mostly a feature of modern fundamentalist thinking.

Some of my Christian fundamentalist friends agree with Sarah Palin on the teaching of ceationism in the public schools.  I am happy to discuss with them the pros and cons of equal time on controversial topics in schools.  But I would not want them to implement their views into public policy. The issue here is not religious beliefs but radical versions of those beliefs.

I agree with Juan Cole that:

The classical Islamic legal tradition generally permitted, while frowning on, contraception and abortion, and complete opposition to them is mostly a feature of modern fundamentalist thinking. Many believers in both Islam and Christianity would see it as hubris to tie God to specific government policies or to a particular political party.

If you have friends who say they are not worried that about a McCain-Palin ticket forcing religious choices onto the public (think Roe v. Wade), I suggest you hand these final paragraphs of professor Coles’ essay to them:

McCain once excoriated the Rev. Jerry Falwell and his ilk as “agents of intolerance.” That he took such a position gave his opposition to similar intolerance in Islam credibility. In light of his more recent disgraceful kowtowing to the Christian right, McCain’s animus against fundamentalist Muslims no longer looks consistent. It looks bigoted and invidious.

From 1972 through 1999, James M. Wall was editor and publisher of the Christian Century magazine, based in Chicago, lllinois. He was a Contributing Editor of the Century from 1999 until July, 2017. He has written this blog, wall writings.me, since it was launched April 27, 2008. If you would like to receive Wall Writings alerts when new postings are added to this site, send a note, saying, Please Add Me, to jameswall8@gmail.com Biography: Journalism was Jim's undergraduate college major at Emory University, Atlanta, Georgia. He has earned two MA degrees, one from Emory, and one from the University of Chicago, both in religion. He is an ordained United Methodist clergy person. He served for two years in the US Air Force, and three additional years in the USAF reserve. While serving on active duty with the Alaskan Command, he reached the rank of first lieutenant. He has worked as a sports writer for both the Atlanta Journal and Constitution, was editor of the United Methodist magazine, Christian Advocate for ten years, and editor and publisher of the Christian Century magazine for 27 years.
View all posts by wallwritings →
This entry was posted in -Archive 2008, Politics and Elections. Bookmark the permalink.

1 Response to Falwell Was an “Agent of Intolerance”; So What Is Palin?