What to Ponder AFTER Watching the Debate

Posted on September 27, 2008 by wallwritings 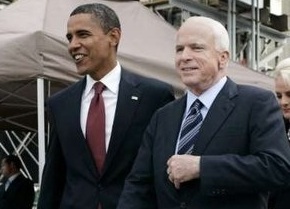 Sarah Palin was banished from all post debate interviews, not a good sign for the McCain-Palin campaign.   Joe Biden was all over the media, appearing on as many network and cable post debate discussions as he could reach.  He did not, however, appear on ABC News.  That network wanted both Palin and Biden, equal time stuff, you know. Unable to get Palin, ABC passed. Is the McCain campaign telling us something?

Huffington Post reports that Palin’s absence from all the spin rooms was a policy adopted by the McCain campaign. Is her departure from the ticket just a matter of time? Twenty-four hours before Thursday’s scheduled vice-presidential debate against Joe Biden could be the “drop dead” deadline.

Based on what we have seen in her previous non-scripted encounters, that debate would not be pretty. It could, in fact, be downright painful.

Hockey Moms everywhere, unite!  One of your own is being exploited and humiliated for her beauty and spunk. Take a look at the exchange between Jack Cafferty and Wolf Blitzer on CNN, a network usually friendly to McCain.

Former AIPAC staffer Blitzer is taken aback by Cafferty’s anger at a Palin appearance on CBS News: “If Sarah Palin Being One Heartbeat Away ‘Doesn’t Scare The Hell Out Of You, It Should'”.   Blitzer tries to soften the blow with no success. You can almost see him wince at what he was hearing over his headpiece from his producer.

Kathleen Parker, a columnist so conservative that she is now a regular op ed Chicago Tribune contributor, wants Palin off the ticket, NOW.  When conservative women with media platforms are against her, surely Sarah Palin must realize McCain will have to send her back to Juneau for more minor league experience.

Bill Clinton must not be watching the news.  Even after the ABC “Charley” interviews, and the disaster with Couric, ole Bill is still out there praising both Sarah and John, like some old TV critic whose taste for quality has been dulled after too long a time in the public spotlight.  Sarah, pay no attention to what Clinton says. You have a future in politics.  But this is not your time.

As for the debate itself, of course McCain showed up.  Was there ever any doubt?  This was Mississippi, a McCain red state where Haley Barbour is governor. Ole Miss had already spent $5 million to host this debate. The campus was alive with excitement. This was Mississippi’s chance to show the nation it was no longer the Ole Miss of its racist past.

If the debate had been in Chicago, Los Angeles or New York City, all hard core blue states?  Much easier for McCain to have kept his straight talking word: No bailout agreement, no debate. But five mil already spent in Mississippi?  This was a no-brainer for McCain.

Across the media spectrum, candidate advocates declared either McCain or Obama the winner.  Polls appear to favor Obama, if for no other reason than the fact that he gave every impression of knowing as much about foreign policy as the longer serving McCain.

As for  body language, always a good topic for post debate analysis, Obama won big time.  McCain refused to look at Obama.  He gave off signs of anger and disdain for his opponent. One observor compared him to a “troll”. You remember, the grumpy fellow beneath the bridge.

McCain repeated, “Obama does not understand. . .” often enough to satisfy  his base. But Obama’s answers suggested he did understand both the complexity of foreign policy and the economic meltdown. McCain appeared angry at having to share the stage with this clearly inferior. . .Democrat?

McCain’s folksy style, emotive in a Reaganist manner, worked, but only if  you liked him going in.  For the undecided, his love for veterans, while heart-felt, seemed shallow in the light of  his vote against the Iraqi veterans’ GI bill. McCain has still not learned how to use his age as experience and not as, well, old age. He recalled his 35 years of knowing Henry Kissinger, reminding viewers he has been at this business for a looong time.

Obama was excessive in his repeated expressions of agreement with McCain, a tactic meant to show his desire to work with those with whom he disagrees. McCain calls this “working across the aisle”, a phrase common in the senate, but with much less resonance among voters.

Obama allowed himself to be bogged down in an exchange over what exactly is meant when a leader says he or she is willing to “sit down with” an opponent. Preconditions?  Of course.  But listeners tune out.

An Obama ad was released Saturday morning with a debate clip on the contrast between Obama’s concern for the middle class and McCain’s apparent lack of interest (“middle class” was not mentioned by McCain during the 90 minute debate). The ad was produced for showing in target states. It is one of the best ads Obama has produced. If you live in a hard core red or blue state, or outside the US, you will see it only on You Tube.

Obama slipped in his oft-repeated reference to the Beach Boys song which McCain sang in 2007, turning “Barbara Ann” into Bomb Iran. McCain ignored Obama’s dig. He had earlier explained his use of the song was intended as a joke to a group of veterans. Good try, but it was not a reassuring explanation to Iranians nor to US allies around the world.

Worth remembering that Barbara Ann was a 1965 pop hit for the Beach Boys when McCain was a young Navy fighter pilot. Two years later his plane was shot down over Viet Nam. McCain spent the next five years in a prisoner of war camp, labeled the Hanoi Hilton. “Barbara Ann” may have been one of the songs he played over in his mind during those difficult years.

Obama worked hard in the debate to link McCain to George Bush.  The current White House occupant is fading fast from public attention, and is not someone a Republican needs hung around his neck. Check the ads for your local Republican candidate for Congress.  Notice any reference to either the Republican party or Bush?

Bush does continue as fodder for comic commentators like Jon Stewart. This clip, comparing the Bush call to invade Iraq in 2003 with a very similar 2008 marching order to confront the financial crisis is on target. It is also quite funny.

From 1972 through 1999, James M. Wall was editor and publisher of the Christian Century magazine, based in Chicago, lllinois. He was a Contributing Editor of the Century from 1999 until July, 2017. He has written this blog, wall writings.me, since it was launched April 27, 2008. If you would like to receive Wall Writings alerts when new postings are added to this site, send a note, saying, Please Add Me, to jameswall8@gmail.com Biography: Journalism was Jim's undergraduate college major at Emory University, Atlanta, Georgia. He has earned two MA degrees, one from Emory, and one from the University of Chicago, both in religion. He is an ordained United Methodist clergy person. He served for two years in the US Air Force, and three additional years in the USAF reserve. While serving on active duty with the Alaskan Command, he reached the rank of first lieutenant. He has worked as a sports writer for both the Atlanta Journal and Constitution, was editor of the United Methodist magazine, Christian Advocate for ten years, and editor and publisher of the Christian Century magazine for 27 years.
View all posts by wallwritings →
This entry was posted in -Archive 2008, Politics and Elections. Bookmark the permalink.