The news came from NPR: A loved one has cancer.

Former President Jimmy Carter made the announcement from the Carter Center in Atlanta.

He did not mince words. He has cancer and it has spread.

His announcement was candid and truthful.

The cancer, which was first identified in his liver, has “spread to other parts of his body”. He expects to hang around for a while; his travel schedule is only cut back, not canceled. How long will a “while” last? We will just have to wait and see.

In Georgia where I grew up, a “loved one” is a family member, or someone who has joined the family circle.

Jimmy Carter, this nation’s 39th  president, is an adopted “loved one” in our family. He is also a fellow Georgian.

It was my great blessing and privilege to work for him through his two campaigns for the White House. Since he and Rosalynn left the White House, we have stayed “in touch”.

After learning of the cancer, I wrote immediately to inform him it is too early for him to leave the battlefield. And, God willing, he won’t leave anytime soon.

I have been reading stories of his cancer announcement. I have also perused the reviews and interviews from his most recent book tour.

One interview in the Los Angeles Times, was especially well done. Written by the Times‘ Carolyn Kellogg, it was on target, with this headline: “In ‘A Full Life,’ Jimmy Carter at 90 remains a wise truth teller”.

Carter’s book demonstrates his consistent “truth telling”.  It is entitled, A Full Life: Reflections at Ninety.

Kellogg’s interview lifts up the truth-telling characteristic of Carter’s that is at the center of his life as a man and as a world leader. She writes:

“One challenge of Carter’s presidency was that he spoke the truth, even though during his years in the White House (1976-80), the truth was often bad news. He faced an energy crisis, a capsizing economy, opposition from Congress, and the revolution in Iran than led to American hostages being held captive 444 days.”

“In A Full Life, Carter puts the long arc of his story together the way he sees it. The book includes his accomplishments as a negotiator and peacemaker in the humblest way — as a man who was at work on a larger project, something he continues to be. A primer for the generations who don’t know his work and a personal retelling for those who do,  A Full Life may herald the reappraisal he deserves.”

In the months and years ahead, as the nation and the world reflect on Carter’s life, “the reappraisal he deserves” should dominate the reflection.

When you travel with a candidate, as I did with Jimmy Carter through two campaigns in Illinois, where I served as his state chair, you come to know him. How well you know him will depend on his openness, his candor and his patience.

From my experience, I can testify that he has an abundance of all three.

Thinking back on our first Illinois campaign together in 1976, one incident stands out. It is not an important incident. But it taught me all I needed to know about this nation’s next president.

Carter was a former governor of Georgia when he launched his 1976 Illinois campaign. I had arranged a campaign stop in the south side of Chicago where the Reverend Jesse Jackson was a dominant political figure.

I had made the very major political mistake of taking Carter to an African-American church without clearing the location with Jackson. A leading political figure in Jackson’s circle, a strong woman with a forceful manner, called me several days before the stop.

She was adamant.  “You cannot go to that church without my approval” was the gist of her message to me. I told her it was too late to make a travel change. I remember her words vividly, and they taught me a political lesson: “You can’t come into our house without first coming through the kitchen”.

I apologized for my ineptness. She remained adamant.

I spoke to Governor Carter. “Call Andy”, was his response, referring to African-American civil activist and political leader, the Rev. Andrew Young, in Atlanta, Carter’s home base.

Carter already knew Chicago politics better than his state chairman.  Young was later a Carter appointee to the United Nations, a congressman and a future mayor of Atlanta.

Andy mollified the strong personalities involved. We stuck to our original plan.

The night Carter spoke at the church, one of our staff members talked to the crowd as it assembled, a crowd not as large as Jesse Jackson would have produced, but adequate.

I was holding Governor Carter “backstage” until he was introduced. Chicago Sun Times political writer Basil Talbott cornered Carter with a question about our choice of that particular church.

Basil also had another political question about the Illinois campaign, which was just in its early stages.

Carter said nothing. He merely nodded to me to handle the mess I had gotten him into. I said not a word about the “kitchen” I had failed to enter earlier.  I mumbled a few words about campaign plans unfolding.

Carter smiled, and then went out and wowed the crowd.

Incidents like that one either destroy a relationship or solidify it.  I remain thankful to this day for Jesse Jackson, and for his lady advocate. I also remain thankful for Andy Young, Basil Talbott, and above all, for Jimmy Carter, for helping me survive a major stumble.

We survived because Carter knew when to ride behind error-prone associates, and when to stand alone, if needed, to speak the truth when the truth was largely hidden.

Carter’s courageous truthfulness is interwoven with his stubbornness and his determination to see a larger picture as it unfolds. When he sees the truth, he follows it, regardless of the consequences.

We all saw that later in his achievements against heavy opposition during his White House years, and throughout the remarkable career he has had as a truth-teller and problem-solver in troubled regions of the world. 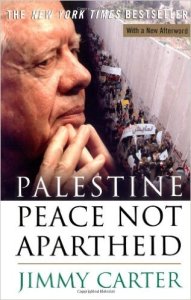 It was Carter’s truth-telling in his book Palestine: Peace Not Apartheid, which forced the Israel-Palestine issue into the light of the world’s attention.

Without that book, which cost him dearly in the circles of power in the nation he led for four years, the truth of Palestinian occupation might still be struggling to gain a hearing in the court of world opinion.

I am grateful for the opportunity I had to play a small part in getting Carter safely through the Illinois political shoals. So many others took him the rest of the way to the White House.

Carter’s struggle is not over, which it is why it is far too early for Jimmy Carter to leave this earthly battlefield. The pending freedom of both Israelis and Palestinians from the bondage of conflict, owes a great deal to this man.

There is work yet to be done, sir.

The picture of Carter is from the Los Angeles Times. It is by Sara Saunders.

From 1972 through 1999, James M. Wall was editor and publisher of the Christian Century magazine, based in Chicago, lllinois. He was a Contributing Editor of the Century from 1999 until July, 2017. He has written this blog, wall writings.me, since it was launched April 27, 2008. If you would like to receive Wall Writings alerts when new postings are added to this site, send a note, saying, Please Add Me, to jameswall8@gmail.com Biography: Journalism was Jim's undergraduate college major at Emory University, Atlanta, Georgia. He has earned two MA degrees, one from Emory, and one from the University of Chicago, both in religion. He is an ordained United Methodist clergy person. He served for two years in the US Air Force, and three additional years in the USAF reserve. While serving on active duty with the Alaskan Command, he reached the rank of first lieutenant. He has worked as a sports writer for both the Atlanta Journal and Constitution, was editor of the United Methodist magazine, Christian Advocate for ten years, and editor and publisher of the Christian Century magazine for 27 years.
View all posts by wallwritings →
This entry was posted in Cancer, Jimmy Carter. Bookmark the permalink.

9 Responses to Jimmy Carter Has Cancer