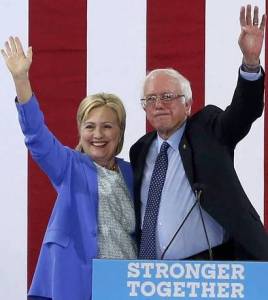 Sanders is also making plans to lead his fellow Senate liberals in opposition to any of President Clinton’s efforts to back away from the current Democratic Party platform.

Thanks to the aggressiveness of Sanders’ platform committee delegates, the platform includes strong domestic progressive planks.

Unfortunately, thanks to pressure from Clinton delegates, the platform failed to take any position on the decades-long, illegal, U.S.-funded Israeli occupation of Palestinian territory.

In an interview this week with John Wagner, of the Washington Post, Sanders said he and other senators “have started plotting legislation that would achieve many of the proposals that fueled his insurgent run for president, including a $15 federal minimum wage, tuition-free public college, an end to ‘mass incarceration’ and aggressive steps to fight climate change.”

Sanders said he and his Senate allies plan to push for the breakup of “too big to fail” banks and to pressure Clinton to appoint liberals to key Cabinet positions, including treasury secretary.

Sanders told Wagner he would not stay silent “if Clinton nominated the ‘same old, same old Wall Street guys’ to regulatory positions that are important in enacting and overseeing the financial policies he supports. ‘I will be vigorously in opposition, and I will make that very clear,’ Sanders said.”

The Democrats need to pick up at least four seats to win the Senate majority if Donald Trump loses [five if he wins].

Duckworth has been endorsed by the Chicago Tribune, a conservative newspaper, over incumbent Senator Mark Kirk (R-IL).

In its endorsement of Duckworth, the Chicago Tribune wrote that a stroke suffered by incumbent Republican Mark Kirk, had reduced his ability to serve in the Senate. Kirk’s staff rejects this conclusion, but has thus far refused to provide medical records to refute the Tribune’s conclusion.

In Wisconsin, former Democratic Senator Russ Feingold has held a consistent lead over incumbent Republican Senator Ron Johnson, the man who unseated him six years ago.

Fifty Republican foreign policy experts have said Donald Trump would be “the most reckless president in American history,” given his lack of experience and rash temperament.

Richard Burr, chairman of the Senate Intelligence Committee, surely knows how dangerous the impulsive, thin-skinned political novice would be in the Oval Office. Burr, perhaps more than any Republican senator, should have taken a principled stand against Trump.

And yet, Burr has not. He has embraced Trump, putting his party and his own political expediency ahead of national security. . . .

Burr insists [his opponent is] too liberal for North Carolina. There aren’t many former ACLU lawyers who wouldn’t qualify for that label.

While the Charlotte Observer endorsement will have the greater impact on North Carolina voters, Wednesday’s endorsement of Ross by The New York Times will add to her growing national recognition.

Meanwhile, with only two weeks to go, the chances of Clinton returning to the White House as the first female President in the nation’s history, remains virtually certain.

As a result, Paul Ryan, Republican speaker of the House, has shifted his campaign attention to electing down-ballot Republican U.S. Representatives. With the increasingly strong possibility of a Democratic majority Senate, the House is almost certain to remain Republican, under Ryan’s leadership.

Politico reports that President Obama, who is campaigning for Clinton, is also investing his time, energy and growing popularity, to Democrats running for state senate and assembly. After a careful vetting, the White House says Obama expects to endorse as many as 150 candidates across 20 states.

The endorsements — which will come along with a variety of robocalls, social media posts, mailers, photos of Obama with the candidates taken as he’s been traveling to campaign in recent weeks, and even a few radio ads — are Obama’s biggest investment in state races ever by far, and come as he gears up to make redistricting reform at the state level the political priority of his post-presidency.

After January 20, President Obama will continue to live in Washington as long as he has a daughter in school there.  He will be well-positioned to work to wrest away the power Republican state legislatures have held over redistricting once every ten years.

He has the motive and he has the time.  He will, after all, be only 55 when he enters his post-presidency. It is well to recall that Jimmy Carter was 66 when he began a post-presidency of many significant achievements.

From 1972 through 1999, James M. Wall was editor and publisher of the Christian Century magazine, based in Chicago, lllinois. He was a Contributing Editor of the Century from 1999 until July, 2017. He has written this blog, wall writings.me, since it was launched April 27, 2008. If you would like to receive Wall Writings alerts when new postings are added to this site, send a note, saying, Please Add Me, to jameswall8@gmail.com Biography: Journalism was Jim's undergraduate college major at Emory University, Atlanta, Georgia. He has earned two MA degrees, one from Emory, and one from the University of Chicago, both in religion. He is an ordained United Methodist clergy person. He served for two years in the US Air Force, and three additional years in the USAF reserve. While serving on active duty with the Alaskan Command, he reached the rank of first lieutenant. He has worked as a sports writer for both the Atlanta Journal and Constitution, was editor of the United Methodist magazine, Christian Advocate for ten years, and editor and publisher of the Christian Century magazine for 27 years.
View all posts by wallwritings →
This entry was posted in Bernie Sanders, Donald Trump, Hillary Clinton, Politics and Elections. Bookmark the permalink.