“For I was in prison and you visited me not’” 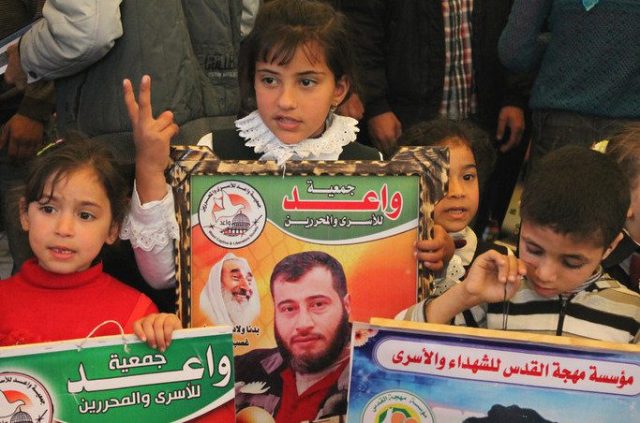 The full text of Matthew 25:42-43, condemns the sins of those who neither see, hear, nor care about those who suffer.

Do not think for a single moment that Jesus was referring solely to a “brief, but helpful visit” to a prisoner’s cell.

With absolute power in its hands, and only scattered opposition from outside, Israel is especially hard on Gaza families.

The picture above of children from those families, is by Joe Catron. It appeared in The Electronic Intifada, over a anger-inducing report by Catron, with the headline, “Children of Palestinian prisoners in Israeli jails are barred from family visits”.

Catron’s report opens with quotes from one of the children:

“I dream of my father,” eight-year-old Hamze Helles said in his family’s house in Gaza City’s al-Shajaiyeh neighborhood. “I miss him a lot, and am very eager to visit him. For five years, I have never seen him.

Hamze is one of two young sons of Majed Khalil Helles, a fighter in Fatah’s al-Aqsa Martyrs’ Brigades who was captured by Israeli forces on 8 August 2008 and sentenced by an Israeli military court to five years’ detention in Nafha prison.

Fourteen months before its military detained Helles, Israel imposed a comprehensive ban on family visits to Palestinian political prisoners from the Gaza Strip. Addameer, the prisoner advocacy organization, called the measure “part of [Israel’s] policy of treating the Gaza Strip as an enemy entity following the 2006 Palestinian legislative elections and the capture of Israeli soldier Gilad Shalit one year prior.

The ban met wide criticism as an illegal act of collective punishment, Addameer said. “Israel’s policy has been condemned, among others, by Palestinian and Israeli human rights organizations, the International Committee of the Red Cross and the UN Fact-Finding Mission on the Gaza Conflict in its report on the 2008–2009 Israeli offensive.”

On Saturday, May 20, Marjorie Cohn, wrote in Truthout, that the prisoner hunger strike, which began on Palestinian Prisoners’ Day, April 17, will enter its 36th day on Monday. The strikers consume only salt water.

The 1500 who began the strike are “about a quarter of all Palestinian prisoners being held by Israel”.

The demands of the strikers include:

“increased visitation rights with humane treatment of family visitors; installation of a public telephone to communicate with families; and an end to medical negligence, solitary confinement and administrative detention”.

Marwan Barghouti, the imprisoned Palestinian activist who called for the hunger strike, made his case in a New York Times op-ed, which included this rationale:

Hunger striking is the most peaceful form of resistance available. It inflicts pain solely on those who participate and on their loved ones, in the hopes that their empty stomachs and their sacrifice will help the message resonate beyond the confines of their dark cells.  . . .

Palestinian prisoners and detainees have suffered from torture, inhumane and degrading treatment and medical negligence.

Barghouti added these damning statistics in his Times piece:

Approximately 40 percent of the Palestinian territory’s male population has been imprisoned or detained by Israel at some point. Hundreds of the 6,500 Palestinians who are currently incarcerated are women, children, journalists and elected officials.

“There is hardly a single family in Palestine that has not endured the suffering caused by the imprisonment of one or several of its members”.

In her Truthout report, Cohn writes that in one its rare public statements, the International Committee of the Red Cross (ICRC):

Decried the “systematic suspension” by Israeli authorities of family visits for hunger strikers, and of permits for their families. Citing the Fourth Geneva Convention, the ICRC said Palestinians have a right to these visits, which can only be limited on a case-by-case basis for security reasons, not just for punitive or disciplinary purposes. .  .  .

“Family contact must be improved, not further restricted,” said Mr de Maio, head of the ICRC delegation in Israel and the occupied territories, referring to the systematic suspension by Israeli authorities of family visits for detainees on hunger strike, and of the permits for their families. According to the Fourth Geneva Convention of 1949, Palestinians are entitled to these visits, which can only be limited for security reasons, on a case by case basis, but never for strictly punitive or disciplinary purposes.

“The families are paying the price for this situation,” said Mr de Maio. More generally, Palestinians are detained in Israel, rather than within the occupied territory as required by the law of occupation. As a consequence, family members have less access to their detained relatives. They need special permits and have to undertake long trips to see their loved ones, with checks and waiting times when crossing terminals or at the prison.

Palestinian author, grandmother, and political leader Samia Khouri, posted her own witness to the hunger strike, under the title, Starving for Justice. She expresses a pained awareness of how little attention the world pays to the strike. Her posting, in full, is below:

“How would you feel if your son or daughter went on a hunger strike demanding justice for more than a month, and nobody bothered to call you or check on you and your beloved one?

The silence is so loud that our hearts bleed with those mothers who are gathering daily in various areas including the Red Cross offices in the Palestinian Territories. Yet there is no reaction or action from the Israeli authorities or the international community to respond to their demands for basic rights as political prisoners, in accordance to the Geneva Convention.

So many of those political prisoners have been under administrative detention without any charge or trial.

In fact the only action taken was to move most of those prisoners to prisons near hospitals so that they can be hospitalised if need be or force-fed without any intention of starting a dialogue with them. How long will Israel continue to ignore the basic demands of those prisoners, and continue to get away with treating them with contempt void of any human dignity. Do they need to die before anybody cries out Enough is Enough?”

The focus this week has been on the visit of Mr. Trump to the region. And Israel claimed a couple of days ago that it is introducing easier measures for the Palestinians. Is this a gimmick? Or is the occupation authority trying to pull wool over the eyes of the American administration and the international community? How about introducing easier measures for those prisoners, and starting a dialogue with them?

Please, we appeal to you, our friends, to raise your voice before it is too late to save the lives of those young men and women incarcerated for no other reason than for their legitimate right to resist an illegal occupation.”

As President Trump travels through the region, and the hunger strikers suffer each day, our U. S. Congress should hear from us, not in anger, but in a demand for justice.

Tell your member of Congress to read this basic request for fairness and justice from the strikers:

“increased visitation rights with humane treatment of family visitors; installation of a public telephone to communicate with families; and an end to medical negligence, solitary confinement and administrative detention”.

From 1972 through 1999, James M. Wall was editor and publisher of the Christian Century magazine, based in Chicago, lllinois. He was a Contributing Editor of the Century from 1999 until July, 2017. He has written this blog, wall writings.me, since it was launched April 27, 2008. If you would like to receive Wall Writings alerts when new postings are added to this site, send a note, saying, Please Add Me, to jameswall8@gmail.com Biography: Journalism was Jim's undergraduate college major at Emory University, Atlanta, Georgia. He has earned two MA degrees, one from Emory, and one from the University of Chicago, both in religion. He is an ordained United Methodist clergy person. He served for two years in the US Air Force, and three additional years in the USAF reserve. While serving on active duty with the Alaskan Command, he reached the rank of first lieutenant. He has worked as a sports writer for both the Atlanta Journal and Constitution, was editor of the United Methodist magazine, Christian Advocate for ten years, and editor and publisher of the Christian Century magazine for 27 years.
View all posts by wallwritings →
This entry was posted in Human Rights, Israel, Palestinians, The Human Condition. Bookmark the permalink.