Posted on October 3, 2008 by wallwritings 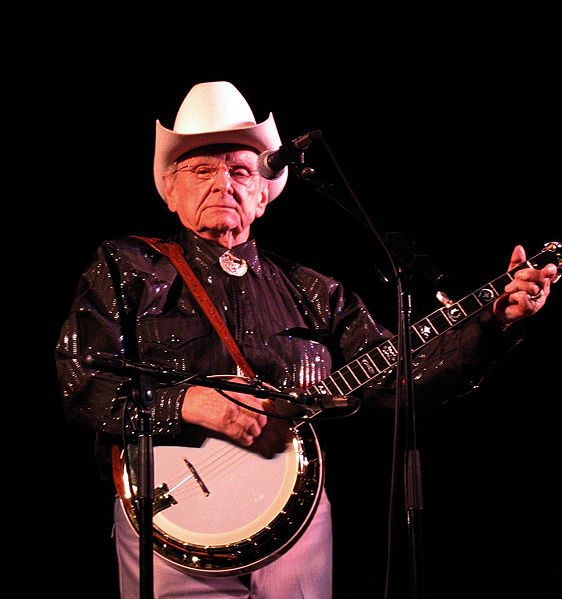 On October 2, the day of the Vice Presidential Debate,  John McCain made an announcement he hoped might draw less attention because of the debate:  His campaign conceded Michigan’s 17 electoral college votes to Obama.  After polls showed Obama running as many as 13 points ahead, McCain canceled his ad campaign and pulled his staff out of Michigan,.

McCain is moving his resources to states “still in play”, including Virginia.  It may be too late. Virginia’s music legend Ralph Stanley has endorsed Obama. As McCain left Michigan’s 17 votes behind he ran into this Associated Press report:

Dr. Stanley (he holds an honorary doctorate for his music) is a popular figure in the world of bluegrass music. He received wider attention In the Coen Brothers’ film, O Brother Where Art Thou?. In that film, Stanley sings the mournful dirge “O Death” during a large 1930s Ku Klux Klan rally in the Deep South. To hear Stanley, scroll down to “O Death” in these clips from the soundtrack.  You may also hear a full rendition of “O Death” on You Tube.

Meanwhile, back at the St. Louis Vice debate, Joe Biden was at his senatorial and personal best. His opponent, Sarah Palin, finally free from media filters (her term) brought joy back to her strong Republican base. The New York Times‘ erudite, and conservative columnist, David Brooks, was so relieved at Palin’s return to the poised, well-rehearsed Governor Palin who wowed the Republican Convention, that he wrote, with a sigh of relief:

“There she was, resplendent in black, striding out like a power-walker, and greeting Joe Biden like an assertive salesman, first-naming him right off the bat.By the end of her opening answers, it was clear she would meet the test. . . .  She spoke with that calm, measured poise that marked her convention speech, not the panicked meanderings of her subsequent interviews.”

By the end of the debate, most Republicans were not crouching behind the couch, but standing on it. The race has not been transformed, but few could have expected as vibrant and tactically clever a performance as the one Sarah Palin turned in Thursday night.

Biden won the night on leadership and debate points. He was his usual knowledgeable self. He has mastered an anti-McCain litany that pounds the Republican challenger even as he calls him a dear friend: “as my mother would say, ‘God love him'”

The public is just discovering that Biden is a superb Irish story-teller whose emotions are always close to the surface. One remarkable moment: Biden talked about being a single parent who was not sure if his sons would survive after Biden’s wife and daughter were killed in a car accident.  Christy Hardin Smith, who writes for FireDogLake called that moment  “Most real thing I’ve seen in politics in a long, long time.”

Palin could not begin to match Biden in content, so, unchallenged by any followup questions demanding specifics, she fell back on her “You betcha” persona,  No doubt, this energized her base, but polling suggests it did not persuade the majority of independents.

Palin embraced Ronald Reagan as the Republican leader who matters (while Bush fades away). In her closing remarks Palin quoted one of Reagan’s inspiring calls for freedom:

It was Ronald Reagan who said that freedom is always just one generation away from extinction. We don’t pass it to our children in the bloodstream; we have to fight for it and protect it, and then hand it to them so that they shall do the same, or we’re going to find ourselves spending our sunset years telling our children and our children’s children about a time in America, back in the day, when men and women were free.

Paul Krugman, writing in his New York Times blog (October 3) did some quick historical research on the Reagan quote.  This is what Krug discovered:

“When did [Reagan] say this? It was on a recording he made for Operation Coffeecup — a campaign organized by the American Medical Association to block the passage of Medicare. Doctors’ wives were supposed to organize coffee klatches for patients, where they would play the Reagan recording, which declared that Medicare would lead us to totalitarianism.”

Palin ends her only national debate by quoting Ronald Reagan during his “block Medicare” period.  That is Medicare, as in the federal program senior citizens swear by. Krug concludes his blog entry: “You couldn’t make this stuff up”.

From 1972 through 1999, James M. Wall was editor and publisher of the Christian Century magazine, based in Chicago, lllinois. He was a Contributing Editor of the Century from 1999 until July, 2017. He has written this blog, wall writings.me, since it was launched April 27, 2008. If you would like to receive Wall Writings alerts when new postings are added to this site, send a note, saying, Please Add Me, to jameswall8@gmail.com Biography: Journalism was Jim's undergraduate college major at Emory University, Atlanta, Georgia. He has earned two MA degrees, one from Emory, and one from the University of Chicago, both in religion. He is an ordained United Methodist clergy person. He served for two years in the US Air Force, and three additional years in the USAF reserve. While serving on active duty with the Alaskan Command, he reached the rank of first lieutenant. He has worked as a sports writer for both the Atlanta Journal and Constitution, was editor of the United Methodist magazine, Christian Advocate for ten years, and editor and publisher of the Christian Century magazine for 27 years.
View all posts by wallwritings →
This entry was posted in -Archive 2008, Media, Politics and Elections. Bookmark the permalink.