Avnery Reveals “The Return of the Generals” 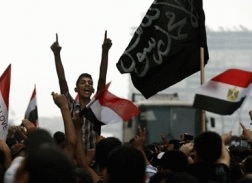 Uri Avnery, intrepid columnist, ageless Israeli peace activist, and retired IDF soldier, has seen, up close, the actions of every government Israeli voters have put in office since the nation was created.

He is not fooled by the antics, decisions and deceptions of the current Israeli right-wing government. Avnery peers into the soul of the Netanyahu-Lieberman team and reports back to his readers the dark visions he finds there.

With a wisdom that was sadly missing from US media following 911, Avnery  writes that the recent deadly exchange of fire in the southern Sinai gave Prime Minister Benjamin Netanyahu the excuse he needed to change Israel’s public conversation. Avnery calls his posting, “The Return of the Generals”.

At the beginning of the week, Binyamin Netanyahu was desperately looking for a way out of an escalating internal crisis. The social protest movement was gathering momentum and posing a growing danger to his government. The struggle was going on, but the protest had already made a huge difference. The whole content of the public discourse had changed beyond recognition.

The city square of Tel Aviv has been covered with protesters living in tents.  There was danger the Arab Spring spirit would soon engulf the region’s so-called “Only Democracy”.

Talk of “security” was pushed aside. As Avnery put it, TV talk show panels, which had previously been filled with “used generals”, were now packed with social workers and professors of economics.

And then it happened. A small extremist Islamist group in the Gaza Strip sent a detachment into the Egyptian Sinai desert, from where it easily crossed the undefended Israeli border and created havoc. Several fighters (or terrorists, depends who is talking) succeeded in killing eight Israeli soldiers and civilians, before some of them were killed. Another four of their comrades were killed on the Egyptian side of the border. The aim seems to have been to capture another Israeli soldier, to strengthen the case for a prisoner exchange on their terms.

In a communications pattern familiar to American consumers of radio and TV news, discussions by economic experts about young people angry about jobs and housing were replaced by the “old gang of exes – ex-generals, ex-secret-service chiefs, ex-policemen, all male, of course, accompanied by their entourage of obsequious military correspondents and far-right politicians”.

Netanyahu was once again playing the role that allowed him to be seen as “the he-man, the resolute fighter, the Defender of Israel”. He became George W. Bush after 911, when the cowboy president from Texas grabbed a bull horn at Ground Zero and pledged to hunt down those dirty, murderous people who dared to attack the homeland.

After the Eilat clash Netanyahu sent his forces into action, not waiting for verification as to the source of the attackers. Richard Silverstein, writing on his Tikun Olan blog, finds that this attack handed Israel a “gift”.

This is exactly the sort of gift that Israeli rightists like Bibi Netanyahu love. Faced with a mounting internal crisis in the form of the J14 movement, Palestinian rejectionists have handed him his “Get Out of Political Crisis Free” card.

Yesterday’s attack in Eilat has fueled an Israeli reaction that can be described as uncontrollable fury, which has killed 14 including three children. Today [August 19], an Israeli drone performed heroically for the fatherland by incinerating a car (or in other reports a motorcycle) carrying a Palestinian doctor and his family to hospital seeking treatment for a sick child.

The doctor, his brother, and the doctor’s little boy were killed in the attack. Ynet announced: Oops, we missed. The drone was aiming for a terrorist cell traveling nearby. WAFA says the doctor’s brother was an Al Quds commander, which would mean that the IDF is willing to kill sick 2-year-old children in order to get alleged terrorists as well.

In a flash, Netanyahu had changed the subject, just as Bush changed the subject in 2001 from the economy to “security against terrorists”. The Israeli leader is not concerned with the truth.  He will leave that task to future revisionist historians. The Israeli leader wants only to fire up the fear of the populace and remind them that security is to be found only in the military prowess of the world’s fourth largest military force.

On his blog, War in Context, Paul Woodward posted a video clip of an interview with an IDF officer which suggests that the Israel retaliation attack on Gaza was carried out before Netanyahu could identify the culprits involved.  In the posted video interview with an IDF official, Woodward found that the government’s own military leaders did not know exactly who had attacked the Israeli bus.

Why then is Israel now bombing Gaza? Simply because it bombs Gaza every chance it gets. It bombs Gaza knowing that Washington will never object. It bombs Gaza because whenever Jews are killed the easiest form of revenge is to kill Palestinians — even when those particular Palestinians most likely have nothing whatsoever to do with the deaths that triggered this particular cycle of violence.

Why, indeed, is Israel once again bombing Gaza? One rather obvious answer is that the Israeli public must be persuaded that Palestinians are not to be trusted to form their own government. The pattern is obvious. Israel is in danger of losing the September 20 vote for Palestinian statehood in the United Nations General Assembly. Latest predictions from Palestinian officials: They are only three to five votes short of obtaining a majority in their favor.

Since President Obama is on record promising to veto a subsequent Security Council vote for Palestinian membership in the UN, there is no chance that this will be the year UN grants statehood status in response to the request presented by Palestinian President Mahmoud Abbas.

Meanwhile, Israel maintains its stubborn posture in the battle of apologies in the region, rejecting the demand from Turkey that Israel apologize for its deadly assault by naval commandos that killed nine Turkish citizens traveling on an aid flotilla bound for Gaza on May 30, 2010.

When Israel refused to apologize for the attack Turkey recalled its ambassador to Israel and has subsequently announced that “it would  launch a diplomatic and legal assault on Israel”.  Sources in the Turkish Foreign Ministry said Turkey would implement “Plan B”, which will include an anti-Israel campaign in UN institutions, with an emphasis on the International Court of Justice.

Turkey also plans to encourage the families of the raid’s victims to file suits against senior Israeli figures in European courts.

Also on the apology front, the Cairo News reports that Egypt has demanded an apology from Israel for the deaths of three police officers in the IDF attacks along the Egyptian-Gaza border this week.

Breaking a customary silence on the Sabbath, the Israeli defense minister, Ehud Barak, released a statement saying, “We regret the deaths of members of the Egyptian security forces during the terror attack on the Israeli-Egyptian border.”

Mr. Barak, who had seemed on Thursday to blame lax Egyptian security for allowing the attacks near the border, said that after an internal inquiry, an Israeli-Egyptian committee would investigate. And he went on to note the importance of the peace treaty with Egypt and his admiration for the judgment and responsibility of the Egyptian people.

These events all occurred after 81 members of the US House of Representatives returned to their home districts, basking in the warm hospitality of their Israeli hosts. One of those House members was Jesse Jackson, Jr.,  who, before he returned home, wrote a column for the Jerusalem Post, which included these paragraphs:

Marwan Barghouti, even though he has been jailed since 2002, is an influential Fatah leader who is serving five life sentences for acts committed in the second intifada. He has called “on our people in the homeland and in the diaspora to go out in a peaceful, million man march during the week of voting in the United Nations in September.”

He told an Egyptian news service that a US veto would be a “historic, deadly mistake” and that there would be strong protests throughout the Arab and Muslim world and beyond. Does a convicted terrorist who has used violence in the past, and has not ruled out its use in the future, really have the moral authority and credibility to advocate a nonviolent march and be believable?

Good question, Congressman, which leads to a follow up question: You express such familiarity with the Israeli hasbara narrative, that your constituents might want to ask if you are also familiar with the Palestinian narrative which would provide you with a different take on the career of Marwan Barghouti.

Congressman Jackson, yes, he is the son of the Rev. Jesse Jackson, Sr., had previously expressed interest in receiving a direct appointment to the US Senate seat from the now-disgraced former Governor Rod Blagojevich, the seat which President Obama vacated to move to the White House. It was the “attempted sale” of that seat that pending appeals, is expected to send Blagojevich to a federal prison.

If Congressman Jackson still wants to run for that seat with the backing of the same AIPAC-related forces that funded his August visit to Israel, he would have to first win a Democratic primary and then compete with Republican incumbent Senator Mark Kirk. Why would AIPAC, a long time backer of Kirk, turn its favors to Jackson?

Kirk has his detractors in Illinois, as the lively video below, suggests.  Sing along, and if you are of a mind to do so, drop Senator Kirk a note and ask him about the “moral authority” of the IDF drone that killed “a Palestinian doctor, his brother, and the doctor’s little boy in Gaza”.

The picture at the top of this page is an AP photo that appeared in Salon.com.  It was posted there in a column by Glenn Greenwald.  The picture shows Egyptian demonstrators raising Egyptian and Palestinian flags to protest the deaths of Egyptian security forces killed in a shootout Thursday. The video at the end of the posting was uploaded to YouTube by The Committee for a Just Peace in Israel and Palestine (CJPIP), based in Chicago.

8 Responses to Avnery Reveals “The Return of the Generals”