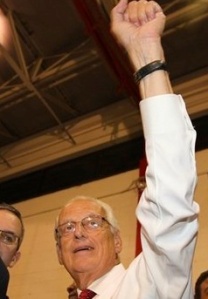 One election night victory in one New Jersey congressional district does not represent a major shift in American politics. But shifts do occur, and they must start somewhere.

On the night of June 5, 2012, this was the news the Star-Ledger reported from the Passaic County Community College in Paterson, NJ.

What makes the news from Passaic County so surprising was that Pascrell’s election to a House seat from New Jersey’s new 9th district was not supposed to happen.

How could it, two years after the news broke that Bill Pascrell was one of 54 House members who signed a 2010 letter to President Obama urging him “to use diplomatic pressure to resolve the blockade affecting Gaza.” The letter reads, in part:

The unabated suffering of Gazan civilians highlights the urgency of reaching a resolution to the Israeli-Palestinian conflict, and we ask you to press for immediate relief for the citizens of Gaza as an urgent component of your broader Middle East peace efforts. . . . The current blockade has severely impeded the ability of aid agencies to do their work to relieve suffering.

Signing that letter was a risky political move for Pascrell. It was certain to stir pro-Israel forces, led by AIPAC, the powerful fund-dispersing and rhetorical master source of invective against any member of the US Congress who dares raise a voice on behalf of  “the citizens of Gaza”.

And stir them it did. The Israel Lobby left Pascrell alone in the 2010 election cycle because he had no serious opposition in either the primary or general election. Wolf packs don’t attack strong members of a deer herd. The pack waits for the opportunity to bring down victims perceived to be vulnerable.

Following the 2010 census, New Jersey’s population decline led to the loss of one congressional district, dropping the state from 13 to 12 districts. By law the House is allowed 435 districts, divided according to population, among the 50 states.

After new district lines were drawn, the new 9th CD New Jersey voters were forced to choose between two incumbents, Steve Rothman, the member from the 9th CD, who had held that seat since 1996, and Pascrell, who had served the 8th CD for the same number of terms.

In December, 2011, Rothman’s hometown of Fair Lawn was moved into the Republican-leaning district of U.S. Rep. Scott Garrett (R-5th Dist.).

Instead of running against an incumbent Republican, Rothman moved his residence to Englewood — the city he once served as mayor. He preferred to run against Pascrell in the new 9th District. Pascrell was at a disadvantage. The majority of voters in his new district had previously voted in Rothman’s old district.

In a surprise development, even to many of his supporters, Bill Pascrell, (pictured above) raised  his arm in victory to celebrate his 61%-39% victory in the new 9th district, defeating Rothman by a strong margin of 30,227 to 19,228 votes.

How did this happen? It really is a simple story.

When two sitting members of Congress are forced to run against one another, AIPAC decides which one is best for Israel.

In the case of New Jersey’s new 9th CD, both Pascrell and Rothman had “good” voting records on behalf of Israel’s “security”. Votes cast, however, are not the only measure AIPAC examines. To win AIPAC’s endorsement, along with its fund-raising network and its carefully-honed rhetorical invective, the candidate must convince AIPAC leaders of his or her absolute loyalty to Israel.

In Pascrell’s case there remained the matter of Pascrell’s signature on the 2010 letter to Obama. Rothman had not signed the letter.

On January 13, 2012, AIPAC made its choice known through a story in the pages of the New Jersey Jewish Standard.

To bolster AIPAC’s case, The Standard’s story invoked two voices of authority to indicate just how important that defense subcommittee assignment, which, no doubt was arranged by AIPAC’s agents, is to Israel.

The first voice was an official of the Israeli embassy familiar with Rothman’s work on missile defense, who told the Standard,  “Steve Rothman has been instrumental in actively championing missile defense cooperation for years.”

The second voice of authority was that of Josh Block, “a former longtime spokesman for the American Israel Public Affairs Committees, who said that Rothman has a record of pro-Israel leadership second to none.”

The Standard concludes, “In the Democratic primary race between Rothman and Pascrell, ‘the differences couldn’t be clearer.'”

To underscore that difference, Josh Block harkened back to Pascrell’s signature on the 2010 letter. In his reading of the letter, Block accused Pascrell of  having “actually sided against American support for Israel’s right to defend herself against weapons smuggling and attacks by terrorists.”

Did the letter say that? Of course not. But from AIPAC’s perspective and from the perspective of the deep-pockets of the PACS it directs from a discrete distance, truth is not the issue, Israel is. 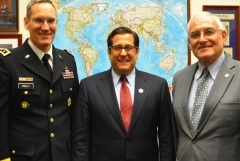 It was an easy decision for AIPAC to make. In a January JTA story, one congressional aide, whose boss previously served with Rothman on the House Appropriations Committee, said, “There are less than a handful of congressmen who bring the kind of passion, intensity and commitment to America’s security and Israel’s security that Steve Rothman does.”

“He has a laser beam-like focus on defeating the enemies of Israel, and he’s definitely not shy about holding the State Department accountable.”

Voters in New Jersey’s new 9th CD were not sufficiently impressed by Rothman’s closeness to Israeli officials and his reliable votes favoring Israel.

Voters may also have been offended by attacks on Congressman Pascrell.

You would not know it from reading the local New Jersey papers, nor the New York Times, nor the Washington Post, none of which picked up on the beneath the mainline media-radar Zionist right wing attacks on Pascrell.

Reporting on Pascrell’s victory, the mainline media preferred the story line that former President Clinton endorsed and supported  Pascrell while President Obama’s chief strategist David Alexrod made a last minute appearance with Rothman to lend White House cache to Rothman, who had been  an early supporter of candidate Barack Obama against Hillary Clinton during the 2008 presidential primaries.

The right-wing attacks inspired by the Israel Lobby were led by Steve Emerson, a former AIPAC staffer.

Steve Emerson, the rightist Islamophobe who formerly worked at AIPAC, put out a long vicious hit piece on Pascrell depicting the Roman Catholic Pascrell as an “Islamist Fellow Traveler.”  . . . Rothman embraced the lobby onslaught, doing everything he could to make the primary a referendum on Israel, Islam, Muslims, etc.

Then, well below the media radar, something surprising took place. Pascrell received strong support from an unexpected source.

James Zogby of the Arab American Institute, a Christian Lebanese-American and a strong supporter (like Pascrell) of Israeli-Palestinian peace,  came in to work with the district’s Arab-American population and help the local people organize  for Pascrell.

Weiss emphasizes that “the issue wasn’t Israel; it was Rothman’s Arab and Muslim-baiting which offended Arab-Americans as much as Jews would be offended by an openly anti-Semitic candidate.”

Weiss concludes and clearly wants to stress, that “Bill Pascrell did not win because of the Israel issue. He himself is pro-Israel, just not anti-Arab.”
As Weiss reads the campaign, Pascrell won because of his own strong Get Out The Vote campaign, his door to door effort and “because he is an effective and strong progressive from a district that appreciates that.”
Pascrell’s victory was a surprise and it could be only an anomaly. Or, it could be the beginning of a new spirit in American politics in which AIPAC no longer controls Congress.
In any event, Congressman Pascrell’s victory in New Jersey’s 9th CD, was a “bright shining moment” in American politics. In its own way it may mark the beginning of a new tectonic shift in the geological ground under our political landscape.

The picture above of Congressman Pascrell is by John Munson, of  The Star Ledger (New Jersey).

From 1972 through 1999, James M. Wall was editor and publisher of the Christian Century magazine, based in Chicago, lllinois. He was a Contributing Editor of the Century from 1999 until July, 2017. He has written this blog, wall writings.me, since it was launched April 27, 2008. If you would like to receive Wall Writings alerts when new postings are added to this site, send a note, saying, Please Add Me, to jameswall8@gmail.com Biography: Journalism was Jim's undergraduate college major at Emory University, Atlanta, Georgia. He has earned two MA degrees, one from Emory, and one from the University of Chicago, both in religion. He is an ordained United Methodist clergy person. He served for two years in the US Air Force, and three additional years in the USAF reserve. While serving on active duty with the Alaskan Command, he reached the rank of first lieutenant. He has worked as a sports writer for both the Atlanta Journal and Constitution, was editor of the United Methodist magazine, Christian Advocate for ten years, and editor and publisher of the Christian Century magazine for 27 years. James M Wall died March 22, 2021 at age 92. His family appreciates all of his readers, even those who may have disagreed with his well-informed writings.
View all posts by wallwritings →
This entry was posted in Middle East, Politics and Elections and tagged bill pascrell, Middle East, passaic county community college, politics, steve rothman. Bookmark the permalink.