Five Years and Counting: Israel Creates and Manages Its “Humanitarian Crisis in Gaza” 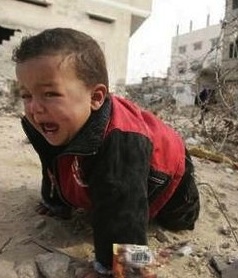 Drawing from a report by Save the Children, Electronic Intifada’s Managing Editor Maureen Clare Murphy, describes what she correctly terms, Israel’s managed “humanitarian crisis in Gaza”.

A humanitarian crisis that is managed? Wait a minute; “managing” means controlling what happens. Yes it does.

Which is how it comes about that Israel is managing “Gaza’s humanitarian crisis”.

Aided and abetted by the United States, Israel has for five years deliberately  and systematically blockaded Gaza with militarily-enforced “restrictions placed on the movement of people and goods in and out of Gaza”.

The humanitarian crisis in Gaza does not come from floods, hurricanes, or earthquakes. This on-going crisis comes from the official policy of Israel.

American tax payers are funding this evil and deliberate crime, through annual doles in the billions, and the continued presence of corporate US interests that support and contribute to the managed crisis. (And which American church leaders refuse to condemn.)

How could it be that American tax payers permit a blockade that “has been the single greatest contributor to endemic and long-lasting household poverty in Gaza”, an act that prevents families from access to food, medicine and medical care?

We are all “good Germans”, no different from those Germans who denied the reality of trains loaded with Jews that traveled through their countryside, bound for German-managed camps where Jewish men, women and children were starved, experimented on, and killed with modern efficiency.

Here is just a part of the Gaza report from Brtitish-based Save the Children. The report has gathered statistics on the effect of the blockade. These statistics reveal what we would rather not know:

Sanitation-related diseases with serious implications for child mortality, such as typhoid fever and watery diarrhoea in children under three years of age, have increased at clinics serving refugees in the Gaza Strip. Gaza’s polluted water supply will have long-term health implications, but current monitoring is insufficient to measure the impact of untreated sewage and poor water quality.

The full Save the Children report, with footnotes, written in the unemotional tone of an official report, may be accessed at this link.

It is an appalling situation for which Israel, the United States, and the rest of the “good Germans” in the world, are deeply liable and responsible.

What do we do about it? Nothing. When protesters attempt to “run the blockade”, Israel kills its passengers. When Rachel Corrie stands in front of a Caterpillar tractor and demands that it not destroy a home in Gaza, Israel kills her.

The American mainstream media ignores this blockade, accepting Israel’s pretense that the blockade is for security.  The US Congress takes funds from Israeli backers and underlines its approval of the long-term exposure of Gaza children to chronic malnutrition, by cheering Israeli leaders who come to Washington asking for more money to starve children.

Presidential candidates quake in fear that they will appear to be anything less than Israel lovers.

What keeps the Congress and the presidential candidates from saying what at least some of them, deep down, know to be true? Only they, and whatever God they follow, know for sure, but whatever it is that keeps them silent, they are complicit in an evil clearly condemned in religious scriptures

How bad is the “managed humanitarian crisis” these politicians continue to support? A news release on the report states:

Gaza’s only fresh water source is now too dangerous to drink and is contaminated with fertiliser and human waste, according to a shocking new report from Save the Children and Medical Aid for Palestinians (MAP).

On the fifth anniversary of the blockade, Gaza’s Children: Falling Behind, reveals desperate families are being forced to buy from private sources, not knowing that in most cases this water too is contaminated, often at ten times the safe level.

With 1.7 million people – including more than 800,000 children – crammed into just 365 square kilometers – an area roughly equivalent to the size of the Isle of Wight – Save the Children is concerned about the increasing threat of disease.

[The island of Wight, located off the coast of England, is 148 square miles. In the US, this is equivalent to the square miles in Wisconsin’s Marinette County, and Illnois’ Boone County.]

“Innocent children are living in inhumane conditions after five years under a blockade. They are now forced to drink dirty and dangerous water that will make them weak and sick. Diarrhoea which is easily treated here in the UK can be a killer in these conditions.” said Justin Forsyth, Chief Executive of Save the Children.

In this summer of 2012 while we look the other way, the children of Gaza live under an Israeli-managed program which systematically assaults children. This is official conduct that is illegal under any set of humane laws.  It is also immoral under all known religious standards.

It can be corrected. Justin Forsyth outlines some of the conditions under which the children of Gaza live:

There are only two crossings available for people to leave Gaza and people require select security permits to leave the heavily guarded exit. Crucial equipment needed to repair the sewage and water system remains blocked and on the restricted list of goods allowed in. Just one fifth of the equipment needed has been delivered to date, with the remainder sitting unused in warehouses.

“Gaza children are living in prison-like conditions, trapped and unable to dream of a better future. We must end the blockade and ramp up immediate projects to provide clean, safe drinking water and sanitation.”

Specifically, Save the Children calls for these actions:

Israel must lift the blockade in its entirety to enable the free movement of people and goods in and out of Gaza, including the West Bank and Jerusalem. All planned water and sanitation projects must be implemented immediately and a clear timetable provided by the Israelis for their completion. The International Community, along with relevant authorities must implement long term strategies to improve conditions for children. The Palestinian Authority must facilitate the impartial and rapid material provision and funding of medical supplies and services in Gaza. Donor must ensure that funding is available for long term projects and not just emergency, short term projects.

Nothing complicated there.  Nothing that has not been said in more elevated terms in Matthew 25, where some harsh things are said about those who deliberately create a humanitarian crisis and then professionally manage the crisis to keep it going.  At least that is what I see when I read about sheep and goats in my translation of Matthew 25.

The picture above is that of a child in Gaza. It is from The Guardian. The report cited is from Save the Children, based in England.

From 1972 through 1999, James M. Wall was editor and publisher of the Christian Century magazine, based in Chicago, lllinois. He was a Contributing Editor of the Century from 1999 until July, 2017. He has written this blog, wall writings.me, since it was launched April 27, 2008. If you would like to receive Wall Writings alerts when new postings are added to this site, send a note, saying, Please Add Me, to jameswall8@gmail.com Biography: Journalism was Jim's undergraduate college major at Emory University, Atlanta, Georgia. He has earned two MA degrees, one from Emory, and one from the University of Chicago, both in religion. He is an ordained United Methodist clergy person. He served for two years in the US Air Force, and three additional years in the USAF reserve. While serving on active duty with the Alaskan Command, he reached the rank of first lieutenant. He has worked as a sports writer for both the Atlanta Journal and Constitution, was editor of the United Methodist magazine, Christian Advocate for ten years, and editor and publisher of the Christian Century magazine for 27 years.
View all posts by wallwritings →
This entry was posted in Middle East Politics, Politics and Elections, Religion and politics, The Human Condition and tagged american tax payers, chronic malnutrition, electronic intifada, Middle East, politics. Bookmark the permalink.

7 Responses to Five Years and Counting: Israel Creates and Manages Its “Humanitarian Crisis in Gaza”