Dr. Who and The Look of Shame 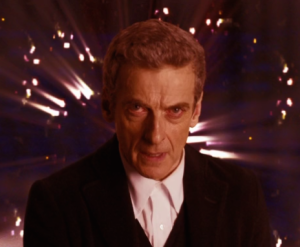 Missy (the Time Lady formerly known as The Master) asks Clara, “What is that look on the Doctor’s face?” Clara responds, “It is a look of shame.”

This exchange comes in this season’s opening episode of the BBC television series, Doctor Who. The Doctor’s look of shame is derived from something he did, or failed to do, years ago.

That look of shame is the appropriate metaphor for a formidable sea of faces. If you are a tax payer and a voter, a Doctor Who look of shame deserves to be on your drivers’ license, because our tax dollars fund Israel’s arms currently in use to kill protesting Palestinian stone throwers and knife wielders.

The look of shame also deserves to be on the faces of Israeli voters who continually choose political leaders who send their young men and women to kill, not just to deter, angry protesters whose stones and knives are no match for Israeli rifles.

The campaign on U.S. campuses to block efforts to tell the Palestinian story, is a display of shameful, craven and cowardly responses by academic leaders yielding to Zionist pressure.

The full list of faces that should be shamed is too long to detail here. It must be added however, that those faces that cry out for shame are soothed and encouraged by U.S. religious leaders who prefer ignorance in the face of reality, and even refuse to endorse BDS, a peaceful Palestinian protest movement.

Also enabling faces that should be shamed, are the U.S. media power brokers whose journalists “report” on the massacre of Palestinians with distorted reporting from Israeli hometown newspapers like the New York Times, which distorts events from Palestine and Israel to soothe readers and advertisers.

One of many recent examples may be found in a Times story this week which began,

“​Despite an Israeli security crackdown that includes giving the police greater leeway to open fire and mobilizing 1,400 border police reserve officers, Israel is struggling to contain a spasm of violence. Palestinians carried out four attacks against Israelis in Jerusalem on Monday alone.. . .”

Buried deep in the story, the Times strains to pretend its pretentious media “balance” with this:

“Al Haq, a Palestinian human rights group, noted that under global standards the use of firearms ‘is permissible as an absolute last resort’ against imminent threat of death or serious injury, and ‘only when other extreme measures are proven insufficient’.

“Sarit Michaeli of the Israeli human rights group B’tselem said, ‘On an immediate level, of course the police have an obligation to protect citizens. But they are expected to do so by using the minimum amount of force.’ If necessary, the police could aim to shoot suspects in the leg, she said’.”

“Today National Public Radio did a piece on the latest violence in Israel and Palestine and referred again and again to events in occupied territory, but never provided that simple fact to readers. Host David Greene began by saying that the latest stabbing took place ‘just outside Jerusalem’s Old City.’

“Yes: it took place in occupied East Jerusalem, at the Damascus Gate. Palestinians who live there can’t even vote for the government that controls their lives.

“NPR’s correspondent Emily Harris reported that the stabbing ‘didn’t come out of nowhere. There are always tensions simmering at some level here, though it does go up and down.’ The ancient enmity idea.

Then she referred to the murderous arson attack in a ‘Palestinian village last summer.’ That July 31 attack was inside the occupied territories, and said to be perpetrated by Israeli colonists. She didn’t say so.

“Harris went on to talk about the dispute over access to the Holy Sanctuary, or Temple Mount, in occupied Jerusalem. Again, not a word about occupation, and religious zealots were made out to be ‘interested’ in equal rights, Jewish groups that are interested in ‘expanding Jewish rights on the Holy site.’

“Harris spoke of Israeli security forces’ efforts to ‘figure out how to respond to’ Palestinian attacks; again, not a word about their being occupiers.”

Meanwhile, describing his own Israeli society in a realistic way never found in any American mainline publication, Ha’aretz columnist Gideon Levy wrote, under the headline, Israel’s Lawless Death Penalty Without Trial Buoyed by Cheers of the Masses:

“A spree of extrajudicial killings is sweeping over the land. It’s sickening, barbaric and lawless – and it is buoyed by the cheers of the masses, media incitement and the authorities’ encouragement.

“Now add to the wave of terror attacks the worst kind of damage – Israeli society is losing its image. This society has had savage periods before, but not like this one, in which every stabber or anyone who threatens with a knife, screwdriver or vegetable peeler is executed, even after he has thrown down his weapon, while the killer becomes a hero of the nation.

“Those who wanted the death penalty for terrorists are now receiving a more ignominious version – a death penalty without trial. Fourteen Palestinians have been killed this way in the past week, most of them would not be liable for a death sentence in a state of law. The blood lust, the likes of which is not remembered in these parts, wants more and more blood.”

On one occasion in recent U.S. history, attorney Joseph Welch abruptly ended a senate hearing involving Senator Joseph McCarthy, with a series of phrases from the shame family:

“The army hired Boston lawyer Joseph Welch to make its case. At a session on June 9, 1954, McCarthy charged that one of Welch’s attorneys had ties to a Communist organization. As an amazed television audience looked on, Welch responded with the immortal lines that ultimately ended McCarthy’s career:

“Until this moment, Senator, I think I never really gauged your cruelty or your recklessness.” When McCarthy tried to continue his attack, Welch angrily interrupted, ‘Let us not assassinate this lad further, senator. You have done enough. Have you no sense of decency?'”

“Israelis tend to blame the violence on Palestinian ‘incitement.’ But Israeli society marched directly into the current crisis with eyes wide open, Noam Sheizaf writes, by electing politicians who have done everything in their power to maintain the occupation. Likewise, the ability to improve the situation and prevent the next round of violence is in Israel’s hands alone.

In the face of this evidence from courageous Israeli journalists, where is our sense of decency? Where is our shame? Must we continue to be “Good Germans” who pretend we not know what is happening?

Or do we stumble into the future, torn between competing narratives, one invented from biblical traditions, the other lived in current reality?

The picture of Dr. Who is courtesy of BBC. The picture of the dead Palestinian boy lying on the street in the Pisgat Zeev section of East Jerusalem, is from Menahem Kahana/Agence France-Presse. It is a Getty Image. The boy’s body is surrounded by police officers who shot him.

From 1972 through 1999, James M. Wall was editor and publisher of the Christian Century magazine, based in Chicago, lllinois. He was a Contributing Editor of the Century from 1999 until July, 2017. He has written this blog, wall writings.me, since it was launched April 27, 2008. If you would like to receive Wall Writings alerts when new postings are added to this site, send a note, saying, Please Add Me, to jameswall8@gmail.com Biography: Journalism was Jim's undergraduate college major at Emory University, Atlanta, Georgia. He has earned two MA degrees, one from Emory, and one from the University of Chicago, both in religion. He is an ordained United Methodist clergy person. He served for two years in the US Air Force, and three additional years in the USAF reserve. While serving on active duty with the Alaskan Command, he reached the rank of first lieutenant. He has worked as a sports writer for both the Atlanta Journal and Constitution, was editor of the United Methodist magazine, Christian Advocate for ten years, and editor and publisher of the Christian Century magazine for 27 years. James M Wall died March 22, 2021 at age 92. His family appreciates all of his readers, even those who may have disagreed with his well-informed writings.
View all posts by wallwritings →
This entry was posted in Middle East Politics, Palestinians, Television. Bookmark the permalink.

6 Responses to Dr. Who and The Look of Shame