Discerning “Signs of the Times” in Iowa and Israel 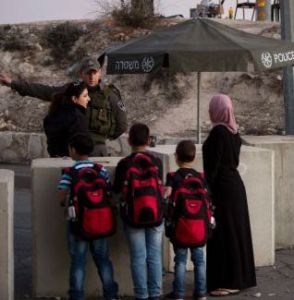 Jesus told his disciples they must learn to “discern the signs of the times” (Matthew 16:3).

In the Iowa caucuses, Monday, February 1, voters will offer their secular versions of political signs for the future when they select two potential presidential candidates.

Republicans have many choices for a future president, led by a raging bully named Trump, a “non-politician” who has so far outrun all the politicians lined up against him.

Which 2016 political signs are there for discernment? For voters concerned about guns, ISIS, God, wages, and health care, signs abound. But don’t look for signs to discern the end of Israel’s continued military control over the people of Palestine.

There are none. Unless, that is, the total absence of signs, is a sign in itself.

Don’t look to the Iowa caucus results for any grasp of reality on the Palestine-Israel issue.  Look instead to corners of Israel’s media. Begin with Israel’s major moderate daily, Ha’aretz.  Its editor-publisher, Amos Shocken, began an editorial in his own publication with these clear and cogent words:

“There are many differences between conditions in South Africa during the apartheid era and those current in the land from the Jordan River to the sea, especially in the territories that Israel controls beyond its internationally recognized borders. However, there is one important feature they share: two peoples living on one piece of land.

“One people has all the rights and protections, while the other is deprived of numerous rights and lives under the former’s control. Israel determines the fate and day-to-day life of millions of people who have no influence over its decisions.

“The government of Israel is the party that will debate whether or not to accept the Israel Defense Forces’ recommendation to ease policies toward the Palestinian Authority and its people.

“In South Africa, there were similar discussions about easing apartheid for blacks.

“Israel as an apartheid state is not a viable situation, not only because of the corruption of values but also because this predicament is liable to lead Israel, like South Africa in its time, to banishment from the family of nations.”

This is from a highly respected Israeli publication. Remember how the American media and the Democratic party leaders denounced President Jimmy Carter for even his use of the term “apartheid” in the title of his 2007 book, Palestine: Peace Not Apartheid ?

Almost a decade later, Jimmy Carter is still speaking the language of political realism and faith, which remains foreign to the current leaders of this nation.

The headline and subheadline that greeted Ha’aretz readers over Schocken’s editorial are also signs to be discerned: “Only International Pressure Will End Israeli Apartheid”:

“The growing delegitimization of Israel is this country’s own handiwork. Should Israel decide to end apartheid, it will return to being legitimate in every respect.”

Later in his editorial, Schocken wrote a critique rarely found in U.S. media or any mainstream political utterance, of what Israel’s current government policies have done to the concept of Zionism:

“The nearly 50 years of Israeli apartheid are not based on security considerations. Zionism, which was always prepared to divide the land of Israel with its Arab inhabitants, was replaced by the godly promise of the Land of Israel for the Jewish people.

“This promise is being fulfilled by constant, methodical settlement in the West Bank (including East Jerusalem) along with the pushing of Palestinians into defined enclaves and small, crowded population areas.

“This is the reason for the abuse of Palestinians, for the expulsion, exclusion, construction bans, lack of freedom of movement and prevention of development in Area C, which makes up roughly 60% of the West Bank.”

In speaking to his disciples, as recorded in Matthew, Jesus contrasts their ability to read the signs in the sky to guide them in their fishing plans. He said to them, in effect, you know when rain is predicted, or when clear skies lie ahead.

Political candidates in Iowa refused to touch the issue for which Ha’aretz Editor Amos Schocken gave them the road map to peace.

Their silence is a sign of political impotence when seeking money and votes.

The current US president was also silent on this issue in his two campaigns for the office. But now that he is in final year of office, he provides a sign of what a U.S. politician free of the burden of Israel’s control is able to say.

“United States Ambassador to Israel Dan Shapiro, voiced nearly unprecedented criticism against Israel’s settlements in the West Bank on Monday. Shapiro praised progress made in the investigation into the arson-murder in the Palestinian village of Duma, but emphasized the inadequate response by Israeli authorities to settler violence against Palestinians.

“Speaking at the Institute for National Security Studies (INSS) conference in Tel Aviv, Shapiro said, “Too much Israeli vigilantism in the West Bank goes on unchecked,” adding that “there is a lack of thorough investigations… at times it seems Israel has two standards of adherence to rule of law in the West Bank – one for Israelis and one for Palestinians.”

Shapiro’s speech was a clear sign of a political figure willing to speak honestly for the good of the oppressed.  God forbid, we will have to wait another eight years to see such signs and hear such honesty.

The picture at top was taken at a Jerusalem check point when a mother and her children stood and waited while two Israeli soldiers examine their papers before they were allowed to take the road home. It is an AP photo from Ha’aretz. The picture of Shapiro is also from Ha’aretz.

From 1972 through 1999, James M. Wall was editor and publisher of the Christian Century magazine, based in Chicago, lllinois. He was a Contributing Editor of the Century from 1999 until July, 2017. He has written this blog, wall writings.me, since it was launched April 27, 2008. If you would like to receive Wall Writings alerts when new postings are added to this site, send a note, saying, Please Add Me, to jameswall8@gmail.com Biography: Journalism was Jim's undergraduate college major at Emory University, Atlanta, Georgia. He has earned two MA degrees, one from Emory, and one from the University of Chicago, both in religion. He is an ordained United Methodist clergy person. He served for two years in the US Air Force, and three additional years in the USAF reserve. While serving on active duty with the Alaskan Command, he reached the rank of first lieutenant. He has worked as a sports writer for both the Atlanta Journal and Constitution, was editor of the United Methodist magazine, Christian Advocate for ten years, and editor and publisher of the Christian Century magazine for 27 years.
View all posts by wallwritings →
This entry was posted in Donald Trump, Hillary Clinton, Israel, Middle East. Bookmark the permalink.