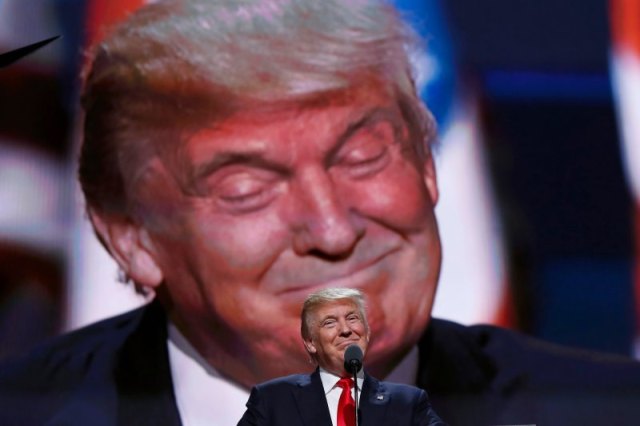 George Orwell’s 1984 is now dangerously close to reality. In the picture above, Donald J. Trump looms on the large screen behind the nominee, bringing an ominous reminder of Orwell’s “Big Brother”.

The acceptance speech Trump gave on the closing night of the Republican National Convention was filled with emotional shouts designed to engender fear.

Donald John Trump’s speech echoed a tone across the years, a reminder of four of Orwell’s oft-quoted slogans from his 1949 dystopian novel, 1984: “War is peace; Freedom is slavery; Ignorance is strength; Big Brother is Watching You.”

The Democrats will nominate Hillary Clinton this week. On Friday, she announced Virginia Senator Tim Kaine as her vice-presidential choice, a decision which could stir a negative convention response from Bernie Sanders’ delegates.

It is, however, an establishment choice her delegates and donor base will embrace.

Vote for Jill Stein’s Green Party or Gary Johnson’s Libertarian Party if you like. But remember, a third-party vote is a feel-good protest. Save it to vote for next year’s Homecoming Queen and King.

The harsh reality is that we have reached a moment of serious choice where we have the power to give the White House to Orwell’s “Big Brother” or to the Establishment’s Chosen One. 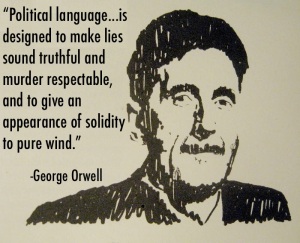 Choices of this magnitude are never easy. Not to choose, however, is to hide in fear in a fox hole on our national political battlefield.

Donald Trump’s acceptance speech gave us more than enough reason to stay with the Establishment, as distasteful as four more years of neoliberal militarism will be.

Molly Ball, in The Atlantic, offered her analysis of the convention that pushed this nation to its penultimate decision for president. She began:

And so it came to pass, in the year 2016, on a sunny day in America’s heartland, in a hall smelling of sweat and popcorn and filled with a seething, roaring crowd, that Donald Trump—builder, shocker, demagogue, smasher of certainties, destroyer of the Republican Party, winner—accepted his party’s nomination, with a vow to restore order.

“Americans watching this address tonight have seen the recent images of violence in our streets and the chaos in our communities,” Trump proclaimed, his hand slicing the air, his pompadour gleaming with the reflection of hundreds of lights. “I have a message for all of you: The crime and violence that today afflicts our nation will soon—and I mean very soon—come to an end,” he added. . . .

Trump exploits the senseless deaths of police officers, to create fear in his listeners. It was a simplistic, bombastic Trump “toe in the water” dip into a complex domestic crisis. He promises to “restore order” to the nation “very soon”.

Does he not know? Has he not been told? Cities and states are responsible for law enforcement, not the federal government.

Trump moved deeply into his fear and hatred diatribe with many facts that were wrong. Juan Cole identified one of many distortions (he has others):

AP’s Fact Check found that as usual Donald Trump’s statistics in his GOP acceptance speech are way beyond the ‘damned lies’ level. So here are some illustrative graphs to suggest the level of his duplicity: “Homicides last year increased by 17 percent in America’s 50 largest cities. That’s the largest increase in 25 years.” (Statistica)

Actually violent crime including murder has fallen precipitously in the US since 1990. The murder rate is historically low, which means that year to year statistical fluctuations can easily be exaggerated. . . .

Trump not only gave voters a display of how tyranny is born, but in so doing, he has damaged the Republican Party as the preserver of conservative values. For some, “the party died” in the Cleveland convention.

That death is painfully described in this interview with Nicole Wallace, a veteran Republican party professional:

The picture at top is by Carolyn Kasteer. It is an AP photo that appeared in the Daily Beast.

From 1972 through 1999, James M. Wall was editor and publisher of the Christian Century magazine, based in Chicago, lllinois. He was a Contributing Editor of the Century from 1999 until July, 2017. He has written this blog, wall writings.me, since it was launched April 27, 2008. If you would like to receive Wall Writings alerts when new postings are added to this site, send a note, saying, Please Add Me, to jameswall8@gmail.com Biography: Journalism was Jim's undergraduate college major at Emory University, Atlanta, Georgia. He has earned two MA degrees, one from Emory, and one from the University of Chicago, both in religion. He is an ordained United Methodist clergy person. He served for two years in the US Air Force, and three additional years in the USAF reserve. While serving on active duty with the Alaskan Command, he reached the rank of first lieutenant. He has worked as a sports writer for both the Atlanta Journal and Constitution, was editor of the United Methodist magazine, Christian Advocate for ten years, and editor and publisher of the Christian Century magazine for 27 years.
View all posts by wallwritings →
This entry was posted in Donald Trump, Hillary Clinton. Bookmark the permalink.

4 Responses to Big Brother or Hillary: A Final Muddled Choice