Trump at The Movies: “Put an Amen to It” 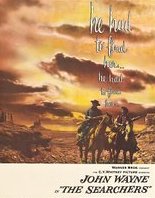 A raid has killed members of a frontier family. Ethan Edwards, portrayed by an angry, unforgiving John Wayne, was secretly in love with one of the victims. The quick burial in a nearby hillside cemetery is conducted by a family friend, the Reverend Captain Samuel Johnston Clayton (Ward Bond).

Mourners sing, “Shall we gather at the river”. The Reverend Captain Clayton, formerly of the Confederate army, stands beside three wooden crosses. He prays.

Ethan Edwards abruptly ends the service with an angry shout, “Put an amen to it. There’s no more time for praying.”

A posse prepares to ride out in search of the raiders.

These moments below from John Ford’s 1956 classic western film, The Searchers, begin a long search driven by the dark emotions of hatred and revenge.

It is now Holy Week in America, a time when Christian America prays in its solemn assemblies.

“Putting an amen” on those prayers, our angry new president has ordered his navy to fire 60 Tomahawk missiles at an airbase in Syria.

It was from that base the U.S. claims Syrian President Bashar al-Assad launched a deadly chemical attack on a rebel-held town in northern Syria.

Main stream media responsed to the Tomahawks by praising President Trump for finally acting “presidential”. Even New York Times columnist Nicholas Kristof, a media champion for oppressed children worldwide, concluded the Tomahawk attack was the right thing to do:

President Trump’s air strikes against Syria were of dubious legality. They were hypocritical. They were impulsive. They may have had political motivations. They create new risks for the United States.

But most of all, they were right.

I’m deeply suspicious of Trump’s policies and competence, but this is a case where he is right and Barack Obama was wrong. Indeed, many of us believe that Obama’s worst foreign policy mistake was his passivity in Syria.

Robert Parry turns to a different movie to signal his conviction that blaming Syria for the initial sarin attack in northern Syria was a flawed “rush to judgment”.

Parry suggests that the eagerness with which US neocons in the US  “treated the Syrian government’s responsibility for the poison-gas incident as flat-fact”, might be Donald Trump’s Wag the Dog moment.

It may have been Assad or it may have the rebels. Or maybe it was an accident. In any event, the Trump response did not reflect careful deliberation.

Parry began his analysis of Trump’s Wag the Dog moment with a different reading from that of the main stream media.

Just two days after news broke of an alleged poison-gas attack in northern Syria, President Trump brushed aside advice from some U.S. intelligence analysts doubting the Syrian regime’s guilt and launched a lethal retaliatory missile strike against a Syrian airfield.

Trump immediately won plaudits from Official Washington, especially from neoconservatives who have been trying to wrestle control of his foreign policy away from his nationalist and personal advisers since the days after his surprise victory Nov. 8.

Parry also points out that the New York Times’ “lengthy story did not even deign to include the denials from Syria and Russia that they were responsible for any intentional deployment of poison gas.”

Parry maintains that the Times story was as emotionally flawed as was the President’s decision to fire the missiles.

Logic and respect for facts no longer prevail inside Official Washington, nor inside the mainstream U.S. news media.The mainstream U.S. media has presented the current crisis with the same profound neocon bias that has infected the coverage of Syria and the larger Middle East for decades.

Parry also finds that the eagerness of the Times to bring Trump into the neocon orbit, and move him away from his previous nationalism, is consistent with its 2003 cheer-leading for George Bush’s “shock and awe” attack on Saddam Hussein’s Iraq forces.

The two films, The Searchers and Wag the Dog, do not offer exact parallels to the initial chemical attack and Trump’s eagerness to attack Syria. The two films, each in its own way, however, do point to two certainties: Trump’s irrational grab for revenge and the ability of government officials and the media to “change the narrative” for the President.

Michael Gordon, who was one of the authors of the Times piece about Trump’s attack, has long served as a reliable Times neocon advocate.

The use of military power is the preferred neocon change method.

This was evident in 2002 when Gordon was “the lead author with Judith Miller of the Times’ bogus “aluminum tube” story in 2002 which falsely claimed that Iraqi leader Saddam Hussein was reconstituting a nuclear-weapons program”.

That 2002 Gordon-Miller article was cited by President George W. Bush’s aides as a key argument for invading Iraq in 2003. That war is now generally acknowledged to be one of this country’s worst and most tragic foreign policy decisions.

Should Obama punish Assad for using chemical weapons on his own people, a violation of the red line Obama had drawn, or should he, as Jeffrey Goldberg wrote in the Atlantic, “step back from air strikes and allow the violation of a red line he himself had drawn to go unpunished”.

Obama told Goldberg that “today that decision is a source of deep satisfaction for me”.

“I’m very proud of this moment,” he told Goldberg. “The overwhelming weight of conventional wisdom and the machinery of our national-security apparatus had gone fairly far. The perception was that my credibility was at stake, that America’s credibility was at stake. And so for me to press the pause button at that moment, I knew, would cost me politically.

And the fact that I was able to pull back from the immediate pressures and think through in my own mind what was in America’s interest, not only with respect to Syria but also with respect to our democracy, was as tough a decision as I’ve made—and I believe ultimately it was the right decision to make.”

This was the moment President Obama believes he finally broke with what he calls, “derisively”, the “Washington playbook.”

“Where am I controversial? When it comes to the use of military power,” he said. “That is the source of the controversy. There’s a playbook in Washington that presidents are supposed to follow. It’s a playbook that comes out of the foreign-policy establishment. And the playbook prescribes responses to different events, and these responses tend to be militarized responses.

Where America is directly threatened, the playbook works. But the playbook can also be a trap that can lead to bad decisions. In the midst of an international challenge like Syria, you get judged harshly if you don’t follow the playbook, even if there are good reasons why it does not apply.”

Finally, former British Ambassador to Syria, Peter Ford, suggested that one cause of the initial chemical explosion in northern Syria could have been a bomb that struck chemical weapons stored by rebel troops.  Here is his interview with BBC:

Obama made the right decision in 2013. Trump has just made the wrong decision, embracing both the revenge of The Searchers, and the media manipulation of Wag the Dog.

The photo above of President Trump is from Shutterstock, taken during his 2016 campaign. The scenes from The Searchers are from Youtube.

From 1972 through 1999, James M. Wall was editor and publisher of the Christian Century magazine, based in Chicago, lllinois. He was a Contributing Editor of the Century from 1999 until July, 2017. He has written this blog, wall writings.me, since it was launched April 27, 2008. If you would like to receive Wall Writings alerts when new postings are added to this site, send a note, saying, Please Add Me, to jameswall8@gmail.com Biography: Journalism was Jim's undergraduate college major at Emory University, Atlanta, Georgia. He has earned two MA degrees, one from Emory, and one from the University of Chicago, both in religion. He is an ordained United Methodist clergy person. He served for two years in the US Air Force, and three additional years in the USAF reserve. While serving on active duty with the Alaskan Command, he reached the rank of first lieutenant. He has worked as a sports writer for both the Atlanta Journal and Constitution, was editor of the United Methodist magazine, Christian Advocate for ten years, and editor and publisher of the Christian Century magazine for 27 years.
View all posts by wallwritings →
This entry was posted in Donald Trump, Israel, Middle East, USA, War. Bookmark the permalink.

6 Responses to Trump at The Movies: “Put an Amen to It”