An Irish Writer and a US Scholar Walk Into a Bar

The Irish writer is Eimear McBride. The scholar is a fellow named Chas Freeman. They did not actually walk into a bar together. Most likely they have never met. But they are soul-mates.

Chas and Eimear have each recently offered readers a deeper look into the evils of Israel’s occupation. The old “walk into a bar” line is merely a device to entice you to read what they want to share.

Eimear McBride speaks first. She is back from her first visit to  Palestine. She is angry. She has brought many pictures with her. She slams one of them on a table.

In the picture, a Palestinian boy stands on the tiled floor of what had been his bathroom. The roof and the walls are gone.

The house was not bombed. It was destroyed, one might say to the boy, by some bad people who didn’t want him to live there.

After she returned to Ireland, Eimear McBride wrote an essay which appeared April 15, in The Irish Times, under the headline: “Eimear McBride in the West Bank: ‘All that is human in me recoils from this’.”

In the essay she gives the background of the picture of the boy:

As I took a photo of a man’s goats grazing in the rubble of what had been his house, he said: “Hey take a picture of my son”. But when I did, he said: “No, where his kitchen should be, where his toilet was.” When he put the child down, his baby shoes soaked up the wet from the tile fragments surrounding the skeletal remains of a squat loo and the thin line of debris dividing it from where a kitchen must have been. I took the photo and looked at the little sodden feet. I couldn’t imagine how they would ever get dry in that tiny tin shack where this little boy, along with his whole family, now lived, and hoped would not be torn down again soon.

From where I stood I could easily see into the warm, well-built homes of the settlers beside, who were obliging their close neighbours to live in this foulness, who must’ve looked out every day through the well-fitted glass of their comfortable kitchens on to this shameful site.

Eimear McBride’s essay will appear in early June in the anthology, Kingdom of Olives and Ash, edited by Michael Chabon and Ayelet Waldman. McBride’s visit to the West Bank came after an invitation from Breaking the Silence, an organisation of Israeli army combat veterans against the occupation.

McBride’s novel, A Girl Is a Half-formed Thing, won the inaugural Goldsmiths Prize in 2013 and the 2014 Baileys Women’s Prize for Fiction. She is 41 years old.

Her opening words in the Irish Times essay begin:

I had not thought about the world for a very long time and, of all places, this place had seemed easier to ignore. I am driving down to Jericho now and, for the first time in a week, I breathe.

Not because I have become accustomed to the hassle of checkpoints or seeing young men and women, still teenagers some, looking out at me from behind guns that they know how to use. Not because I have stopped noticing how grown men and women close themselves up behind a mask of quietude in order to cope with their every movement being at the whim of those same youngsters. 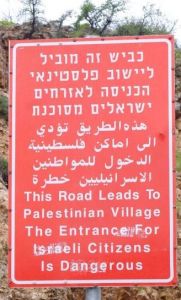 The red signs at every turn off into the West Bank, warning that the Israeli government forbids entry and that entry is dangerous, have not ceased, in a whole variety of selfish and unselfish ways, to alarm me. Quite to the contrary, I am only beginning to see, learning how to look, and my sense of alarm is off the charts.

“Learning how to look” is a clarion call from a writer who came  to Palestine because of an invitation from former Israeli soldiers. These soldiers want the outside world to know the ugly reality of occupation, a reality ignored by far too many who do not want to look.

It is time now for Chas Freeman to speak. This veteran US scholar and diplomat was Barack Obama’s initial 2009 choice for chairman of the National Intelligence Council. Immediate and intensive lobbying by Israel, working through its Israel lobby and its media allies, led to Freeman’s forced withdrawal.

After his removal from Obama’s leadership team, Freeman continued his career in academia. He is currently Senior Fellow, Watson Institute for International and Public Affairs, Brown University.

Freeman, a man accustomed to Zionist vitriol which keeps American politicians in line, undergirds Eimear McBride’s “sense of alarm” from his perspective.

On April 6, Freeman delivered the third in a series of lectures at Brown University on the theme: “Reimagining the Middle East”. He began: “U.S. wars in the Middle East are — without exception — wars of choice. These wars have proven ruinously expensive and injurious to the civil liberties of Americans. They have poisoned American political culture with various manifestations of xenophobia.”

The lecture was delivered just hours before President Trump’s Syrian Tomahawk attack was launched without any consultation with Congress. Freeman told his Brown audience that none of the ongoing U.S. wars in the region have been “authorized by a congressional declaration of war that justifies the commitment of U.S. forces, sets parameters and objectives for their uses of force, and establishes a legal state of war”.

All of these wars are in violation of Article I, Section 8, Clause 11 of the United States Constitution. That article requires a congressional declaration to make wars of choice legal. “The Constitution’s assignment of the war power to the Congress is unequivocal and fundamental to the separation of powers”.

Notwithstanding this, all current American wars are presidentially ordained, permitted but not forthrightly endorsed by Congress, and subject to no effective oversight by anyone other than the nation’s generals. Such is American militarism. None of these wars has a coherent purpose. In none is the United States now in a position to determine the outcome. In none is any end in sight.

The central objective of US policy in the Middle East has long been to achieve regional acceptance for the Jewish settler state in Palestine.

It is this “Jewish settler state in Palestine” that so alarmed Irish novelist Eimear McBride on her first visit to the settler-controlled state of Israel.

Freeman, a former US ambassador to Saudi Arabia, turned his attention to the charade that the US “doggedly sought a political basis for a reconciliation between Israelis and Palestinians”, a so-called reconciliation which “was never designed to reach a fair nor a just conclusion”.

The US as an “honest broker between Israel and Palestine”, has been a lie of such enormous consequences that even the lies of Donald Trump, up to this point, can not compete. The difference, of course is that the “honest broker’ set of lies were peddled for decades with the slick smugness of skilled US and Israeli spin masters.

Chas Freeman said more in his lecture, much more, but we bring to a close his contribution, with these words which seem especially apt for a Palestinian child who wonders why the house that was his home is no longer there:

The Jewish state has evolved since its founding. It has left behind it both the humanism that inspired Zionism and the universal moral precepts traditionally espoused by Judaism.

The perception that Israel no longer shares values it once aspired to exemplify is increasing its international isolation, especially from Jews in Europe and the United States.

But American diplomacy no longer even pretends to seek to halt Israel’s triumphant march toward existential implosion despite the obvious negative consequences of this for the security and international influence of the United States.

The pub is closing. Eimear McBride and Chas Freeman have had their say, for the moment.  Those who have listened are left to wonder why a child’s home has been destroyed by the Jewish state.

In Israel on the 18th day of April, more than one thousand Palestinian prisoners have begun a hunger strike to accomplish two things: Better treatment from their jailers, and a wider international understanding of Israel’s unjust and evil military occupation.

Marwan Barghouti, (left) who refused to recognize the Israeli court that sent  him to prison, is spearheading the strike.  He managed to smuggle out an oped to the New York Times, which ran in the Times’ international edition and on line.

If your media of choice ignores that hunger strike, this is one thing we can all do: Ask that media outlet why a child in Palestine who now lives in a shack, and the protests of strikers in Israeli jails, imprisoned by an occupier’s military system, are not important to them.

The picture of the child in his destroyed home and the Israeli warning sign are by Eimear McBride. The Barghouti picture is from 2002, from Flash 90.

From 1972 through 1999, James M. Wall was editor and publisher of the Christian Century magazine, based in Chicago, lllinois. He was a Contributing Editor of the Century from 1999 until July, 2017. He has written this blog, wall writings.me, since it was launched April 27, 2008. If you would like to receive Wall Writings alerts when new postings are added to this site, send a note, saying, Please Add Me, to jameswall8@gmail.com Biography: Journalism was Jim's undergraduate college major at Emory University, Atlanta, Georgia. He has earned two MA degrees, one from Emory, and one from the University of Chicago, both in religion. He is an ordained United Methodist clergy person. He served for two years in the US Air Force, and three additional years in the USAF reserve. While serving on active duty with the Alaskan Command, he reached the rank of first lieutenant. He has worked as a sports writer for both the Atlanta Journal and Constitution, was editor of the United Methodist magazine, Christian Advocate for ten years, and editor and publisher of the Christian Century magazine for 27 years.
View all posts by wallwritings →
This entry was posted in Uncategorized. Bookmark the permalink.