Trump Deletes Arafat From Accord Signing 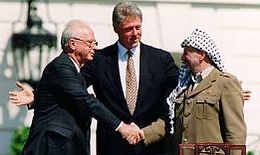 It is a well-known fact of history that to the victor belongs the spoils.

And one of those spoils is the ability to reshape history. Donald Trump has won the presidency. He is now busy reshaping history.

On Wednesday, President Trump met with Palestinian President Mahmoud Abbas at the White House.  The usual “we want peace” talking points were exchanged. The word “justice” was not included.

Since that would be both inhumane to the prisoners and politically devastating to President Abbas, he most certainly would have brushed aside such an idea.

President Trump began his cordial welcoming words to President Abbas with one of those blatant distortions of history that good staff work might have avoided. Unless, that is, the distortion was deliberate.

This is the way President Trump welcomed President Mahmoud Abbas to the White House: “Almost 24 years ago, it was on these grounds that President Abbas stood with a courageous peacemaker, then-Israeli Prime Minister Yitzhak Rabin. Here at the White House, President Abbas signed a Declaration of Principles — very important — which laid the foundation for peace between the Israelis and Palestinians.”

Not content with this shading of truth, Trump sought to link the Oslo Accords to what he believes could be his own Trumpian contribution to history:

There is a problem with this recall of history. It writes former Palestinian President Yasser Arafat out of a major moment of history.

Abbas was, indeed, a member of the Palestinian delegation which traveled to the White House for the historic September, 1993, signing ceremony.

Abbas was certainly in the Palestinian delegation headed by then-PLO leader Yasser Arafat. He most certainly did not sign with “a courageous peacemaker, then-Israeli Prime Minister Yitzhak Rabin”.

And, he did not stand with Yitzhak Rabin. That would be Yasser Arafat, as the historic picture (above), clearly demonstrates.

Rabin did not sign the statement. Arafat did not sign it. They had representatives to do the signing for them.

The BBC remembers the signing: “The leaders did not sign the declaration themselves. Instead, Israeli Foreign Minister Shimon Peres, and his Palestinian counterpart did the signing.

Wikipedia has a more detailed story about the signing.

The Oslo I Accord officially called the Declaration of Principles on Interim Self-Government Arrangements was an attempt in 1993 to set up a framework that would lead to the resolution of the ongoing Israeli–Palestinian conflict. It was the first face-to-face agreement between the government of Israel and the Palestine Liberation Organization (PLO).

Negotiations that led to the agreement were an outgrowth of the Madrid Conference of 1991. They were conducted secretly in Oslo, Norway, hosted by the Fafo institute, and completed on 20 August 1993.

The Oslo Accords were officially signed “at a public ceremony in Washington, D.C., on September 13, 1993, in the presence of PLO chairman Yasser Arafat, Israeli Prime Minister Yitzhak Rabin and U.S. President Bill Clinton”.

The documents themselves were signed by Mahmoud Abbas for the PLO, foreign Minister Shimon Peres for Israel, U.S. Secretary of State Warren Christopher for the United States and foreign minister Andrei Kozyrev for Russia.

With the historic photo above vivid in memory, I naturally turned to the usually reliable White House Office of The Historian website to check the details.

Here is the inaccurate description on that White House website:

On September 13, 1993, Israeli Prime Minister Yitzhak Rabin and Palestine Liberation Organization (PLO) Negotiator Mahmoud Abbas signed a Declaration of Principles on Interim Self-Government Arrangements, commonly referred to as the “Oslo Accord,” at the White House. Israel accepted the PLO as the representative of the Palestinians, and the PLO renounced terrorism and recognized Israel’s right to exist in peace.

The Office of The Historian site has rewritten history to first remove Palestinian leader Yasser Arafat from that White House signing ceremony, and to replace him with Mahmoud Abbas.

Who outside of Washington’s Israeli-loyalists would believe such distortions?

The site incorrectly reports that Israel’s Rabin signed the document. He did not; Shimon Peres signed for Israel, along with Mahmoud Abbas for the PLO, Warren Christopher, for the U.S., and Andrei Kozyrev, for Russia.

All of which leaves questions: Was this the source that President Trump, or his speech-writer, relied on for the Trump-Abbas meeting? Who rewrote history for the Office of the Historian website?

It would be a massive undertaking to write Yasser Arafat out of world history, so why was
this one moment in his career rewritten?

In George Orwell’s futuristic dystopian novel, 1984, currently growing in popularity, the Ministry of Truth is one of four ministries in the government of the nation Oceania .

In 1984, the Truth Ministry serves as the propaganda ministry and spreads a new language called Newspeak. Wikipedia adds a disturbing reminder of the manner in which the Ministry of Truth doctors “historical records to show a government-approved version of events”.

Is President Trump not even familiar with the historic photo above of the handshake between then-PLO leader Yasser Arafat and Israeli Prime Minister Yitzhak Rabin?

There is good reason to believe that he is not a student of history, not even when he is seeking to make history himself.

Mahmoud Abbas will remain here for several more days. When he does return to Palestine, he will have the long flight home to wonder if he has been conned into another journey down “peace talks” lane?

He has heard Trump delete Yasser Arafat from the events of September, 1993. How can he possibly be expected to believe the empty promises he heard uttered from this U.S. President?

The picture above is from Wikipedia.

From 1972 through 1999, James M. Wall was editor and publisher of the Christian Century magazine, based in Chicago, lllinois. He was a Contributing Editor of the Century from 1999 until July, 2017. He has written this blog, wall writings.me, since it was launched April 27, 2008. If you would like to receive Wall Writings alerts when new postings are added to this site, send a note, saying, Please Add Me, to jameswall8@gmail.com Biography: Journalism was Jim's undergraduate college major at Emory University, Atlanta, Georgia. He has earned two MA degrees, one from Emory, and one from the University of Chicago, both in religion. He is an ordained United Methodist clergy person. He served for two years in the US Air Force, and three additional years in the USAF reserve. While serving on active duty with the Alaskan Command, he reached the rank of first lieutenant. He has worked as a sports writer for both the Atlanta Journal and Constitution, was editor of the United Methodist magazine, Christian Advocate for ten years, and editor and publisher of the Christian Century magazine for 27 years.
View all posts by wallwritings →
This entry was posted in Donald Trump, Israel, Middle East, Middle East Politics. Bookmark the permalink.

6 Responses to Trump Deletes Arafat From Accord Signing