Posted on September 9, 2017 by wallwritings 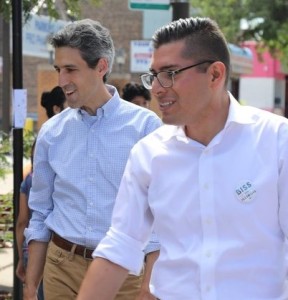 A foreign nation is having an impact on the Illinois Democratic 2018 primary campaign for governor.

Israel’s lobbies, led by AIPAC, are demanding absolute loyalty to Israel from all leading candidates.

Few Illinois voters know the difference between Ramallah and Ramla.

Israel’s lobbies do not care what voters know.

What they do care about, is that the Illinois Democratic nominee for governor, must be loyal to Israel.

The leading Democratic candidate in the March 20, 2018, primary, is J.B. Pritkzer, one of the nation’s richest men. The winner will face incumbent Republican Gov. Bruce Rauner in the 2018 general election.

Running further down in the Democratic primary pack had been the team pictured above on the campaign trail, State Senator Daniel Biss (left), candidate for governor and Chicago Alderman Carlos Ramirez-Rosa, candidate for lt. governor.

Now the two have split over BDS, a litmus test AIPAC uses to measure loyalty.

Biss and Ramirez-Rosa had been favored by the state’s Progressive voting bloc, until the split.

As Robert Mueller and congressional committees dig into Russia’s role in the 2016 election, the Biss and Ramirez-Rosa progressive candidacy was smashed by Israel’s intervention in Illinois politics.

What’s the difference between Russian and Israeli intervention?

One nation has a U.S. base in the form of lobbies. The other does not have a base, unless it is eventually proven that the Trump campaign served as a Russian lobby-agent for Russia.

Ali Abunimah describes in his Electronic Intifada how the BDS issue has shaped the Democratic race.

Pressure from the Israel lobby has forced a promising progressive politician out of the 2018 Illinois governor’s race.

Only a week ago there was much grassroots excitement when Carlos Ramirez-Rosa, a member of Chicago’s city council, was named as the running mate of Democratic gubernatorial hopeful, State Senator Daniel Biss.

Ramirez-Rosa, who was a Bernie Sanders delegate during last year’s Democratic Party convention, is a member of the Democratic Socialists of America (DSA).

His selection was also a nod to the growing political role of Illinois’ Latino population; Ramirez-Rosa represents a diverse, majority Latino ward on Chicago’s northwest side. He has previously spoken about how experiencing discrimination as a gay person and a Latino has shaped his progressive politics.

But that support for Palestinian rights has come up against the hard reality of the Israel lobby’s continued grip on elite sections of the Democratic Party.

Biss initially had made a smart move for his candidacy, when he reached into a Chicago Latino ward and made Ramirez-Rosa his running mate. But after some well-reviewed campaigning, a difference on BDS surfaced.

Ramirez-Rosa revealed that his opposition to BDS was on the national level, not the state. AIPAC warned State Senator Biss, no wavering on BDS.

For that “sin” of his running mate, Daniel Biss was forced to capitulate to Tel Aviv. Ramirez-Rosa withdrew his candidacy on a Facebook post which announced his departure from the Biss campaign.

“While I was honored to be chosen as Senator Daniel Biss’ gubernatorial running mate, it became clear over the past few days that while we share a total commitment to peace, security, and statehood for the Israeli and Palestinian people, and both oppose pursuing BDS at the state level, the difference of opinion we have on the role the BDS movement plays at the federal level would make it impossible to continue moving forward as a ticket.:

Ramirez-Rosa had to go. Biss knew what he had to do. He dumped his running mate.

How exactly did Ramirez-Rosa go wrong ?

Abunimah explained: “Ramirez-Rosa appears to be indicating that he does not contest the first-in-the-nation anti-BDS bill passed by Illinois in 2015, but does oppose pending federal legislation, the Israel Anti-Boycott Act, that has been widely criticized as violating First Amendment free speech rights.”

Where will Illinois progressive go now? There are no leading candidates left who are willing to oppose the Lobby.

On Friday, still hoping to keep his Progressive base, Biss tapped an African American woman, state representative Litesa Wallace, from Rockford, to replace Ramirez-Rosa. In Illinois, candidates for governor and lieutenant governor must run as a team.

Currently leading in the race for governor, is Democrat J.B., Pritkzer, or J.B. as he calls himself in his already extensive TV ad campaign six months before the primary.

J.B. did not have to be recruited or threatened into loyalty to Israel. He is well-established in the Pro-Israel camp.

Abunimah describes Pritzker as “the billionaire scion of a prominent pro-Israel family, who has supported such anti-Palestinian causes as Friends of the IDF, an organization that raises tens of millions of dollars a year to support soldiers in the Israeli army.”

Pritzker’s philanthropic work is well known. It includes the Holocaust Museum and Education Center in Skokie. He led the capital campaign to build the center.

The Pritzker family is one of the wealthiest in America. The family annually ranks near the top of Forbes magazine’s “America’s Richest Families” list. The family is well known for owning the Hyatt hotel chain.

Pritzer’s sister, Penny, was a strong supporter of Barack Obama. She served in the President’s cabinet as Secretary of Commerce.

The other major candidate in the Democratic primary is Chris Kennedy, the nephew of President John F. Kennedy. He played a key role in the 2014 firing of Steven Salaita by the University of Illinois over tweets critical of Israel’s attack on Gaza.

Said Jilani reported for The Intercept, that the all out lobby pressure against the Ramirez-Rosa ticket began when

. . . .Illinois congressman Brad Schneider wrote a Facebook post on Sunday attacking Ramirez-Rosa for his “affiliation with a group that is an outspoken supporter of the boycott, divestment and sanctions movement against Israel.”

Jilani notes that Ramirez-Rosa’s own statements on the question of Palestine “have been critical of the status quo but hardly extreme.” He has, for instance, pointed out that the US has “subsidized the oppression of the Palestinian people” and stated that “people stand with Israel, but they also want to make sure that Palestinian people have [justice].”

Schneider, by contrast, has been an extreme supporter of Israel. According to Jilani, the congressman “has long been affiliated with the right-wing pro-Israel lobby, which tolerates little dissent on the issue.”

Pro-Israel money was a major source of funding for his 2016 election campaign – a whopping $318,000 dollars.

Illinois is just one state. Nor did Biss pose much of a threat to Pritzer or Kennedy, both with backpacks crammed full with Israeli bona fides.

Nevertheless, the Israeli lobbies takes no chances. No campaign is too small, nor too local, to assure that Israel’s control over American politics remains absolute.

From 1972 through 1999, James M. Wall was editor and publisher of the Christian Century magazine, based in Chicago, lllinois. He was a Contributing Editor of the Century from 1999 until July, 2017. He has written this blog, wall writings.me, since it was launched April 27, 2008. If you would like to receive Wall Writings alerts when new postings are added to this site, send a note, saying, Please Add Me, to jameswall8@gmail.com Biography: Journalism was Jim's undergraduate college major at Emory University, Atlanta, Georgia. He has earned two MA degrees, one from Emory, and one from the University of Chicago, both in religion. He is an ordained United Methodist clergy person. He served for two years in the US Air Force, and three additional years in the USAF reserve. While serving on active duty with the Alaskan Command, he reached the rank of first lieutenant. He has worked as a sports writer for both the Atlanta Journal and Constitution, was editor of the United Methodist magazine, Christian Advocate for ten years, and editor and publisher of the Christian Century magazine for 27 years.
View all posts by wallwritings →
This entry was posted in Middle East, Middle East Politics, Politics and Elections. Bookmark the permalink.