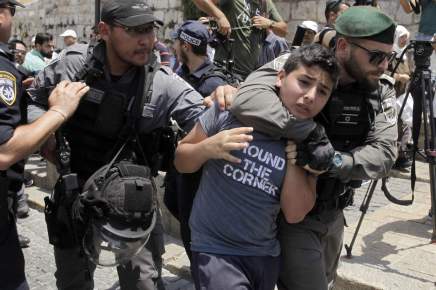 In this, the first week of the second month of my 90th year of life, I take computer
in hand. I am committed to reflect, search for words, and begin a new blog post.

When I first began as a published writer, I took manual typewriter in hand to write a column for my junior high mimeograph newspaper.

That paper, The Signal, gave me the platform to share youthful thoughts with
classmates. I commented on events I read about in the two Atlanta, Georgia, newspapers, the Constitution and the Journal.

One that I vividly remember was my response to the attack on Pearl Harbor. I
was 13.

Not much has changed since that dark attack day, other than the computer replacing the typewriter. Inhumane acts are still with us. Peace and justice are still shoved aside by deceit, fear and violence.

Fortunately, beacons of light do break through the darkness, beacons like Rabbi Laurie Zimmerman (left) of Congregation Shaarei Shamayim in Madison, Wisconsin.

Her thoughts are entitled “American Jews must condemn Israeli detention of Palestinian children”. Her blog was published by The Times of Israel, a conservative Israeli media outlet.

Her words convey an impatience, and a call for action, in the tradition of the Hebrew prophets. She demands that the state of Israel stop its brutal treatment of Palestinian children, a brutality, were it taking place in the United States, would evoke outrage.

Rabbi Zimmerman has traveled through the West Bank where she talked with families. She  writes about the impact of violence and military control on children. She began her blog posting by describing the fear instilled in Palestinian parents by their Israeli military occupiers:

A mother and father panic as soldiers burst into their home, pull their teenage son out of bed, handcuff and blindfold him, and drive away with him, leaving them with no information about where he is going, what he is accused of, or when they will see him again. The soldiers interrogate him for hours with no access to a lawyer or parent present.

His requests for food and water, or use of a toilet, are denied. Terrified, he is subjected to physical and verbal abuse and he is detained for weeks or more in pretrial detention. He has no knowledge of his rights, and he signs a confession written in a language he does not understand. He will do anything to return to his family.

In her posting, Rabbi Zimmerman welcomes the news that for the first time in congressional history, a bill has been introduced in the U.S. House of Representatives which calls for action against civil rights abuses by the Israeli military.

The bill was introduced on Tuesday, November 14, by Minnesota’s Democratic Congresswoman Rep. Betty McCollum (right), who described the situation that led to her bill in The Nation magazine. (updated 12/11/17)

The bill, if passed, would “prohibit the U.S. from funding the detention and prosecution of Palestinian children in the Israeli military court system”.

The bill currently has 17 co-sponsors. (updated 12/11/18). Its introduction comes “several weeks after a report was released by Israeli rights groups, with the support of the European Union, which revealed ‘broad, systemic abuse by Israeli authorities,’ against Palestinian teenagers detained in occupied East Jerusalem.

Writing in Mondoweiss, Sheren Khalel details “the provisions laid out by the the United Nations Convention on the Rights of the Child, signed by both the U.S. and Israel in the 90s (the U.S. signed the treaty, but did not ratify it, while Israel both signed and ratified the treaty into Israeli law)”.

The treaty required, among other things, that ‘‘no child shall be subject to torture or other cruel, inhuman or degrading treatment or punishment,” as well as requiring arrests and detentions of minors be used as a last resort and that said detentions should instituted for the shortest period of time possible. It also requires that children have access to fair and speedy trials.

The bill lists other requirements of the convention, and challenges that the Israeli government fails to protect Palestinian children in accordance to its own laws as well as the treaty.

Khalel notes that “the bill does not request any adjustment or cuts to the amount of money already officially allocated from the U.S. to Israel, instead it requests that none of the funding go toward any of the following practices against children:

That is an important point to make to our Zionist-controlled Congress. The bill proposes no change in the amount of tax-payer funds going to Israel. What it does do is demand that moral standards to which Israel already claims it adheres, be followed in the use of your tax funds.

The bill had 17 co-sponsors through December 11.  For their names, click here. If your member co-sponsored this bill, a word of appreciation would be in order.

Those 17, plus the bill’s author, Rep. Betty McCollum, leaves 419 members of the House who have thus far failed to stand in favor of a bill which is, quite simply, a no-brainer.

Then follow the bill’s progress toward success or failure. Which side will you and your member of Congress choose? Before you answer, look again at the list of “practices against children” listed above.

In the picture above, Israeli border police officers detain a Palestinian youth in Jerusalem’s Old City, Monday, July 17, 2017. The AP Photo/Mahmoud Illean is from Mondoweiss.

From 1972 through 1999, James M. Wall was editor and publisher of the Christian Century magazine, based in Chicago, lllinois. He was a Contributing Editor of the Century from 1999 until July, 2017. He has written this blog, wall writings.me, since it was launched April 27, 2008. If you would like to receive Wall Writings alerts when new postings are added to this site, send a note, saying, Please Add Me, to jameswall8@gmail.com Biography: Journalism was Jim's undergraduate college major at Emory University, Atlanta, Georgia. He has earned two MA degrees, one from Emory, and one from the University of Chicago, both in religion. He is an ordained United Methodist clergy person. He served for two years in the US Air Force, and three additional years in the USAF reserve. While serving on active duty with the Alaskan Command, he reached the rank of first lieutenant. He has worked as a sports writer for both the Atlanta Journal and Constitution, was editor of the United Methodist magazine, Christian Advocate for ten years, and editor and publisher of the Christian Century magazine for 27 years. James M Wall died March 22, 2021 at age 92. His family appreciates all of his readers, even those who may have disagreed with his well-informed writings.
View all posts by wallwritings →
This entry was posted in Israel, Middle East, Uncategorized. Bookmark the permalink.