Posted on November 1, 2008 by wallwritings 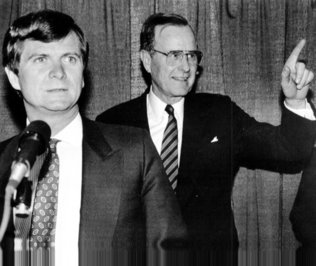 Lee Atwater and President Bush        Photo from the Sacramento Bee

When Colin Powell endorsed Barack Obama on Meet the Press, he spoke of the prejudice and ignorance that now degrades our political system.

. . .  I’m also troubled by, not what Senator McCain says, but what members of the party say. And it is permitted to be said such things as, “Well, you know that Mr. Obama is a Muslim.” Well, the correct answer is, he is not a Muslim, he’s a Christian.  He’s always been a Christian.

But the really right answer is, what if he is?  Is there something wrong with being a Muslim in this country? The answer’s no, that’s not America.

Is there something wrong with some seven-year-old Muslim-American kid believing that he or she could be president?  Yet, I have heard senior members of my own party drop the suggestion, “He’s a Muslim and he might be associated [with] terrorists.” This is not the way we should be doing it in America (emphasis added). Meet the Press, with Tom Brokaw, October 19, 2008.

This is a former Secretary of State who has heard “senior members of my own party” refer to Obama as a Muslim who “might be” associated with terrorists. These are not lowly precinct captains speaking. These are people who converse with former Secretaries of State.  Ignorance is to be found among the leaders of Powell’s Republican Party, as well as among those who attend McCain and Palin rallies primed to shout words of hatred.

George Monbiot, a columnist for the London Guardian, was disturbed enough over evidence of ignorance among American voters to evoke these comments:

Perhaps the defining moment in the collapse of intelligent politics was Ronald Reagan’s response to Jimmy Carter during the 1980 presidential debate. Carter – stumbling a little, using long words – carefully enumerated the benefits of national health insurance. Reagan smiled and said: “There you go again.” His own health program would have appalled most Americans, had he explained it as carefully as Carter had done, but he had found a formula for avoiding tough political issues and making his opponents look like wonks.

. . . .It wasn’t always like this. The founding fathers of the republic — men like Benjamin Franklin, Thomas Jefferson, James Madison, John Adams and Alexander Hamilton — were among the greatest thinkers of their age. They felt no need to make a secret of it. How did the project they launched degenerate into George W. Bush and Sarah Palin?

On one level, this is easy to answer. Ignorant politicians are elected by ignorant people. US education, like the US health system, is notorious for its failures. In the most powerful nation on earth, one adult in five believes the sun revolves round the earth; only 26% accept that evolution takes place by means of natural selection; two-thirds of young adults are unable to find Iraq on a map; two-thirds of US voters cannot name the three branches of government; the maths skills of 15-year-olds in the US are ranked 24th out of the 29 countries of the OECD. . .

Politics in the United States, as Mr. Dooley insisted, is not “bean bag”. But in recent decades, smear campaigns have reached a new low in their sophisticated exploitation of willful ignorance among the voting public.

The American political system can thank Lee Atwater, to a large degree, for this disturbing development. Atwater was the young political operative who perfected the use of television ads to “drive up the negatives” on opposition candidates. a tactic which stretched the truth well past the breaking point to paint an incorrect portrait of his candidate’s opponent.

Atwater started his career in politics as a young staffer with South Carolina segregationist Strom Thurmond. He is the subject  of a  new documentary film which movie merchants sent into the nation’s theaters in the final weekend of the 2008 campaign.  The film is Boogie Man: The Lee Atwater Story, directed by Stefan Forbes. Atwater is gone, but his influence lives on.

Before his death, Atwater worked for three presidents, including George H. W. Bush, for whose 1988 campaign he created the Willie Horton ad used against Michael Dukakis.

The ad attacked a prison furlough program that Dukakis had supported while governor of Massachusetts. Horton, a convicted killer who is black, escaped while in the program and raped a woman. The ad said Dukakis was soft on crime, and made prominent use of Horton’s glowering mug shot. Atwater said he was going to make Horton Dukakis’s “running mate.”

The ad pretty much became the touchstone for demonizing black men in political campaigning. In archival footage, we see Atwater denying that he or the Bush campaign had anything to do with the ad, insisting he’d never even seen it.

This denial is exposed as a lie in the documentary, when a friend is shown recalling the moment Atwater showed him the ad before it ran. “Atwater called him into his office, showed him the ad, said he was going to set it up as the work of an independent committee (and thus, with no fingerprints) and asked what he thought.

The friend says that he told Atwater it was appalling, racist and that it was going to ‘follow you to your grave.’ “

When he was diagnosed with a brain tumor at age 40, Atwater appeared to repent of his nefarious history. He apologized to Dukakis. But as predicted, the ad did follow him to his grave.  Karl Rove continued the Atwater tradition, attacking John McCain in 2000 with false charges about an “illegitimate child”.  This lie was not in an ad, but was pushed by robo calls.

After suffering at the hands of Rove eight years earlier,  McCain has embraced Rovian tactics in his campaign against Obama. He turned to Karl Rove protege Steve Schmidt. who is beind the negative ads McCain used in this campaign’s closing weeks.

The pattern continues: First, Atwater, then Rove, and now, Schmidt.  Ads exploting ignorance worked for Republican presidential candidates in 1988, 2000, and 2004.  If McCain wins on November 4, it will have worked in 2008.  Atwater’s actions have followed him beyond his grave. 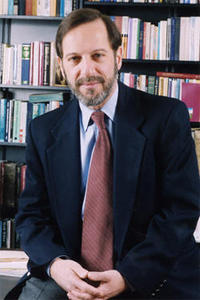 Schmidt is also the Machevellian operative who exploited the public’s ignorance of the history of the Palestinan struggle for nationhood with his campaign attacks on Professor Rashid Khalidi (at right).

The ads, and the campaign rhetoric from McCain and Palin, pointed to Khalidi as someone with a “terrorist” background, a total falsehood.  Khalidi, now at Columbia University, in New York City, was previously at the University of Chicago, where he knew and “associated” with a faculty colleague, Barack Obama.

The truth about Professor Khalidi’s highly regarded academic writings is that he has been critical of the Palestinan leadership’s failure to embrace non-violence, while pointing with great accuracy to the suffering inflicted on the Palestinian people by Israeli occupation.

Major publications, including the New York Times and the Washington Post, rushed to Khalidi’s defense. Support was also forthcoming from Higher Ed.com, and from Juan Cole, an academic colleague of Khalidi’s. They were not in time, however, to prevent McCain from using the term “neo-Nazi” in speaking of Khalidi in his rallies.

If Obama wins on Tuesday, this 2008 election could mark the beginning of the end of willful ignorance in American politics, thanks to folks like Glenn Greenwald who wrote in Salon.com:

Numerous commentators have condemned the McCain campaign’s despicable — and patently false — attack on Professor Rashid Khalidi as an “anti-Semite,” deployed in order, yet again, to insinuate that Barack Obama is an American-hating, Muslim/Arab radical.  Even Fred Hiatt’sWashington Post Editorial Page this morning called McCain’s comments about Khalidi “a vile smear,” “simply ludicrous,” and “itself condemnable,” and favorably cited Khalidi’s response when asked by The Post if he wanted to address the controversy:  “I will stick to my policy of letting this idiot wind blow over.” It’s true, as those commentators point out, that this episode is just the latest in the McCain campaign’s increasingly desperate (and laughably inept) attempt to win by sinking lower and lower into McCarthyite muck.

So there is no need to despair. Good days lie ahead. Maybe, at long last, even Lee Atwater will finally rest in peace.