Get Ready for Tuesday and Remember “Wag the Dog”

Posted on November 3, 2008 by wallwritings 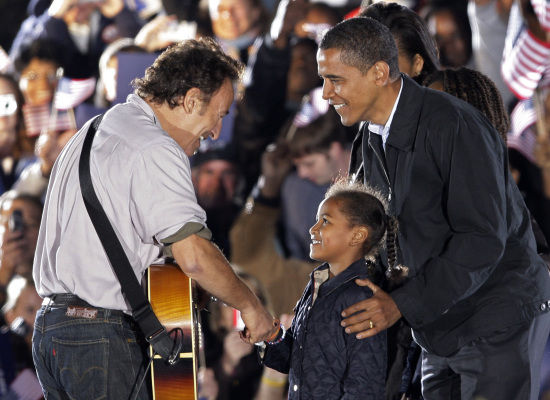 (Special note: this posting was inspired by questions from readers outside the US, and by younger members of my family who are ready to get serious about the process of electing a US president.)

Commentators and pundits are (almost) unanimous in predicting that Barack Obama will win Tuesday’s election.  If they are correct, then in the picture above you are seeing our nation’s new first family as they greet Bruce Springstein at an Obama rally Sunday in Columbus, Ohio.

In the picture, Sasha shakes Bruce’s hand, while Sasha’s father places his left hand on his daughter’s shoulder. Hidden to the right, behind Obama are Sasha’s mother Michelle, and Sasha’s older sister, Malia.

The Huffington Post web site offers a slide show of a rare look at the family campaigning together. After the election, the children are expected to largely disappear from public view.  So this weekend was special.

If you have young children or grandchildren at home or available by phone, who fit Garrison Keillor’s “above average” category in their interest in national affairs, this is an historic election they must not miss.

Even the “average” should pay attention, less they grow up to become a part of that dreaded group of LIVs (“low information voters”).

Here is one way to get ready for Tuesday night.

Eat dinner early so you will be able to watch the returns, starting shortly after 6 p.m. EST, when Indiana results will begin trickling in.

This will truly be an “education moment”. The entire family will discover the importance of each state’s total electoral college vote, determined by adding the total number of US Senators (two per state) and House of Representatives members (based on the state’s population.)

Time zones are important.  For example, the Alaska vote total won’t be available until late at night for eastern state watchers. The vote total for every state, regardless of population size, is also important.

Quick thinking parents might see a lesson to offer here, like in, all states are on the team and every member of the team has a role to play, regardless of size.

Large population states like New York, Pennsylvania, Illinois and California, have the largest electoral college totals, but small states (minimum of three votes, like, for example, Alaska) could have a significant impact in a very close race.

The majority of votes in a state gives a candidate the entire electoral college vote for that state. But note this important difference: The states of Maine and Nebraska allocate their votes according not to the state total, but to the congressional district totals.

Mudflats, my favorite Alaska-based web site, points us to a scorecard the whole family should study. This state by state guide will direct all of us as we follow each candidate’s quest for an electoral college majority of 270.

For the advanced students, there is also a detailed look at all Congressional and Senate races, where Democrats expect to gain new members. A veto-proof 60 Democratic senators is the Senate goal. Mudflats, from Alaska, reports that Obama has closed the gap in the latest Alaskan poll.

(Ted Stevens, one of Alaska’s two senators, has been convicted of a felony and will be replaced by either the voters tomorrow, or the Senate. Contrary to what you may assume, Governor Sarah Palin will not appoint a replacement (a practice followed in other states). Instead there will have to be a special election. If she loses the race for vice-president, she could run for the seat in the special election.)

The key to using the presidential scorecard is to begin with the assumption that Obama will win the same number of electoral votes that went to John Kerry, the 2004 Democratic nominee.

Kerry fell short of victory by failing to win an additional 18 votes in the electoral college total. If Barack Obama holds all of the Kerry states, a highly likely outcome, he will need only 18 votes from the states Bush won in 2004.

If he holds the Kerry states, Obama could win the election by winning Bush states Ohio (20 votes) or a Bush state combination of New Mexico (5) or Nevada (5) and Virginia (13). Check the electoral votes in each state and make your own predictions of states that could win Obama his 18 votes. This map from the website Politico is another important guide.

Washington Post veteran journalists David Broder and Dan Balz, have their own take on the potential outcome, complete with map. Personal disclosure: David Broder is a friend I have known since we met when he covered the 1976 Illinois Jimmy Carter campaign.

Broder and I have had many discussions on the relationship between religion and politics. He graciously makes reference to these conversations in his 1981 book, Behind the Front Page: A Candid Look at How the News is Made (Simon & Schuster)

Polls will close Tuesday night at a time set by each state, not by federal law. (Voters must be in line by the closing time, which means they may actually end up voting well after the closing time, assuming there is a long line of potential voters waiting in line).

Closing times will vary by time zones. Indiana will be the first “swing” state (still too close to call) to begin revealing its returns. Indiana has not voted for a Democratic candidate since 1964 (Lyndon Johson).

If Indiana is a close win for McCain, we can anticipate a nation wide Obama victory, since Republican candidates usually win Indiana by a wide margin.  If Obama wins Indiana, then a landslide Obama victory may be underway.

If McCain wins by a large margin in Indiana, that would suggest a trend, which could be followed by victories in Virginia, North Carolina, Pennsylvania, Ohio and Florida. If that happens he would be on his way to a huge election upset victory.

If you watch to watch a remarkable film while you are waiting for the final returns, see if your local library has a copy of Wag the Dog. (Rated R for language.)

The film is based on American Hero, a novel written by Larry Beinhart. I was reminded of this 1996 novel by alteretnet.org, which posted Beinhart’s essay on Sarah Palin the day before the election.  This piece sums up the ugly division in our culture. A McCain victory would endorse the dark side of that divide.

A McCain victory would also keep alive the success of the Atwater-Rove tradition of smear guilty by association tactics that continued in and around the McCain campaign.

The final weekend of Republican attack ads reached new lows in the Jeremiah Wright ad sponsored by a Pennsylvania Republican organization and a Republican smear Wright ad running nation-wide. McCain told his staff Wright was “off the table”. But Republican groups have restored it to the table, further besmirching a candidate once admired by both the public and the media.

Watch Wag the Dog for an insight into this style of campaigning, which is built on deceiving the public into accepting the “spin” designed to divert attention from the real issues of a campaign. This plot summary is from the Wag the Dog page on http://www.imdb.com

The movie starts with a scandal at the White House where The President is accused of fondling a young girl scout visiting the Oval Office just a few weeks before an election. Being the third party observers, we know the truth, he’s guilty. Robert DeNiro plays “Conrad Brean” the spin doctor who’s job it is to engineer a way and a means to divert the news of the scandal. He brings in Hollywood producer Stanley Motts played by Dustin Hoffman to create an artificial for television only war to distract the American public and let the President get on with the job at hand, protecting the free world.

We, like the American public, get caught up in the events of a fictional war produced in the basement of the White House with computers and blue screens, actors and scenarios. Soon they even release a mental patient who once served in the military because he has the right last name, “Shoe” to portray a war hero of the conflict. They release him because they have a show song from a nostalgic old tune that contains his name, a war tune now to drum up sympathy and national support for the war effort. It doesn’t take ten minutes of the movie before we, like the cast of characters and the public in the movie have forgotten about the young girl in the oval office.

The American public and members of Congress should have revisited Wag the Dog before accepting the Bush spin on why we had to invade Iraq.  This bit of dialogue will explain why:

Conrad ‘Connie’ Brean: (Robert DeNiro) Would you go to war to do that?
CIA Agent Mr. Young: (William Macy) I have.
Conrad ‘Connie’ Brean: Well, I have, too. Would you do it again…? Isn’t that why you’re here? I guess so. And if you go to war again, who is it going to be against? Your “ability to fight a Two-ocean War” against who? Sweden and Togo? Who you sitting here to Go To War Against? That time has passed. It’s passed. It’s over.

The war of the future is nuclear terrorism. It is and it will be against a small group of dissidents who, unbeknownst, perhaps, to their own governments, have blah blah blah. And to go to that war, you’ve got to be prepared. You have to be alert, and the public has to be alert. Cause that is the war of the future, and if you’re not gearing up, to fight that war, eventually the axe will fall.