“Joe, you shouldda left town and stopped payment on the check.” 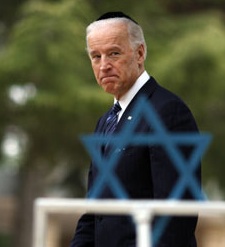 Wish I could take credit for the quote in the above title. Can’t do it. Credit belongs to “Rick’s” response to Paul Woodward’sWar in Contextreaction to the treatment Vice President Joe Biden received from the Israeli government.

On the day the Vice President began his peace-making trip in Israel, his host country announced the start of 1600 new housing units for the exclusive use of  Jewish residents in East Jerusalem.

Eli Yishai is head of Israel’s right wing Shas party. He is also the Interior Minister in Bibi’s government, which controls settlement housing. Yishai–who obviously ignored the “Biden is coming to town memo”–insisted the announcement of the 1600 new units was not intended as an insult.

That excuse might be easier to swallow if it were not for the fact that the 1600 new units are but the latest in a long range construction Master Plan of 50,000 new units in East Jerusalem and the West Bank.

So, of course, Biden did not leave town. Why pretend he was angry at an insult when the expanding Master Plan of 50,000 housing units insults the Palestinian people 24-7.

Besides, Biden does not have any control over the checks the US sends to Israel. Those funds–$3 billion annually–are issued on orders from the US Congress, which in case you hadn’t noticed, is a wholly owned subsidiary of whichever government the people of Israel decide to put in charge of their future and ours.

Instead of flying home in a twit, Biden hung around long enough to give Bibi a dressing down. One Israeli journalist reported on the conversation Biden had with Prime Minister Bibi Netanyahu in a private meeting.

Shimon Shiffer’s revelation of that conversation appeared in the Israeli publication, Yedioth Ahronoth (March 11). It finally reached American readers through Laura Rozen on her Foreign Policy blog on Politco. Here is a sample:

People who heard what Biden said were stunned. “This is starting to get dangerous for us,” Biden castigated his interlocutors.

“What you’re doing here undermines the security of our troops who are fighting in Iraq, Afghanistan and Pakistan. That endangers us and it endangers regional peace.

The vice president told his Israeli hosts that since many people in the Muslim world perceived a connection between Israel’s actions and US policy, any decision about construction that undermines Palestinian rights in East Jerusalem could have an impact on the personal safety of American troops fighting against Islamic terrorism.

Mark Perry, writing on the Foreign Policy blog, gives an added dimension to Biden’s anger about his treatment in Israel. Perry writes that “Biden’s embarrassment is not the whole story”.

On January 16, two days after a killer earthquake hit Haiti, a team of senior military officers from the U.S. Central Command (responsible for overseeing American security interests in the Middle East), arrived at the Pentagon to brief JCS Chairman Michael Mullen on the Israeli-Palestinian conflict. The team had been dispatched by CENTCOM commander David Petraeus to underline his growing worries at the lack of progress in resolving the issue.

The 33-slide 45-minute PowerPoint briefing stunned Mullen. The briefers reported that there was a growing perception among Arab leaders that the U.S. was incapable of standing up to Israel, that CENTCOM’s mostly Arab constituency was losing faith in American promises, that Israeli intransigence on the Israeli-Palestinian conflict was jeopardizing U.S. standing in the region, and that Mitchell himself was (as a senior Pentagon officer later bluntly described it) “too old, too slow…and too late.”

The January Mullen briefing was unprecedented. No previous CENTCOM commander had ever expressed himself on what is essentially a political issue; which is why the briefers were careful to tell Mullen that their conclusions followed from a December 2009 tour of the region where, on Petraeus’s instructions, they spoke to senior Arab leaders.

“Everywhere they went, the message was pretty humbling,” a Pentagon officer familiar with the briefing says. “America was not only viewed as weak, but its military posture in the region was eroding.”

But Petraeus wasn’t finished: two days after the Mullen briefing, Petraeus sent a paper to the White House requesting that the West Bank and Gaza (which, with Israel, is a part of the European Command – or EUCOM), be made a part of his area of operations. Petraeus’s reason was straightforward: with U.S. troops deployed in Iraq and Afghanistan, the U.S. military had to be perceived by Arab leaders as engaged in the region’s most troublesome conflict.

The Mullen briefing and Petraeus’s request hit the White House like a bombshell.

While Petraeus’s request that CENTCOM be expanded to include the Palestinians was denied (“it was dead on arrival,” a Pentagon officer confirms), the Obama Administration decided it would redouble its efforts – pressing Israel once again on the settlements issue, sending Mitchell on a visit to a number of Arab capitals and dispatching Mullen for a carefully arranged meeting with Chief of the Israeli General Staff, Lt. General Gabi Ashkenazi. .  .  .

Perry concluded his posting with this warning that Petraeus left with the White House:

America’s relationship with Israel is important, but not as important as the lives of America’s soldiers. Maybe Israel gets the message now. (To read the complete Perry posting click here.)

The day before the Vice President arrived in Israel, Bibi Netanyahu stood beside Pastor John Hagee at a Jerusalem rally at a celebration for Hagee’s Night To Honor Israel.

At that event, Hagee, the Texas fundamentalist evangelical minister, was bragging about his ministry’s millions in donations to Israeli organizations. He also used the occasion to blast away in his rhetorical bellicose style against Israel’s “perceived enemies”.

Demonstrating his gratitude to Hagee, Netanyahu spoke to the crowd of 1000 American evangelicals who had come to the rally, welcoming them to the city he described as “the undivided, eternal capitol of the Jewish people.”

“I salute you! The Jewish people salute you!” He used the rest of his speech to call for “tough, biting sanctions” against Iran that “bite deep into its energy sector.”

Biden was not set up, and the ministry report announcing an additional 1600 housing units in East Jerusalem, was not a surprise to Bibi.

The Prime Minister’s focus is not on peace making with the Palestinians, but on war talk against Iran, starting with “tough, biting sanctions” against Iran, as he told his 1000 visiting Christian evangelical supporters. For Bibi, it is sanctions or else.

Biden is now back in Washington, with nothing tangible to show for his mistreatment in Israel.

He will have an opportunity to continue his conversation with Bibi Netanyahu when the Prime Minister arrives on American soil to speak to AIPAC at its annual Washington confab on Monday, March 22.

Bibi speaks Monday evening. Will he repeat his apology? Or will he need to respond to Secretary of State Hillary Clinton’s speech Monday morning to Israel’s best US friends. Best, as in guardians of the Congressional coffers.

Clinton expressed her own displeasure with Netanyahu in a 43 minute phone conversation, which did not need to be overheard.  The Secretary ordered her media office to issue a statement about the heated exchange.

Secretary of State Hillary Rodham Clinton on Friday delivered a stinging rebuke to Israeli Prime Minister Benjamin Netanyahu for his government’s announcement this week of new Jewish housing in east Jerusalem, calling it “a deeply negative signal” for the Mideast peace process and ties with the U.S.

The State Department said Clinton spoke to Netanyahu by phone for 43 minutes to vent U.S. frustration with Tuesday’s announcement that cast a pall over a visit to Israel by Vice President Joe Biden and endangered indirect peace talks with the Palestinians that the Obama administration had announced just a day earlier.

Leaders of the US Congress will attend the AIPAC conference this week. Some will be speakers. All are expected to be laudatory.  After all, this is a pep rally.

Hillary Clinton and Joe Biden have already told Bibi Netanyahu what they think about his flagrant foot dragging on the peace front. The AIPAC is a perfect opportunity for the two of them to speak with one voice and tell AIPAC exactly what they said to Bibi.

And this time, why not bring up the matter of that $3 billion annual check from US tax payers.

The picture of Vice President Joe Biden is by Ariel Schalit for /AFP/Getty Images. It was published in the London’s Guardian. The picture of General Petraeus is from the War in Context web site.

17 Responses to “Joe, you shouldda left town and stopped payment on the check.”