Bibi Controls The Summit; Can He Control Israeli Women Smugglers?

The latest round of peace talks between Israeli and Palestine leaders begins Wednesday night with a White House dinner. President Obama will be the host, but Israeli Prime Minister Bibi Netanyahu will be in control.

In addition to Obama and Netanyahu, also at the dinner and the peace summit that follows will be Palestinian President Mahmoud Abbas, Egyptian President Hosni Mubarak, and Jordan’s King Abdullah III. three important Arab allies in the US Middle East empire.

In preparation for the summit meeting, which will not include Hamas, the White House arranged an off the record  conference call during which White House Middle East advisor Dennis Ross (pictured below) assured American Jewish leaders, “the White House will pressure the Israelis and Palestinians to sign off on a peace agreement within a year.”

Furthermore, Ross said, Obama is prepared to “wade shoulders deep into the conflict” — starting with this week’s summit and followed by a visit to the Middle East sometime in the next year. And that’s not all: 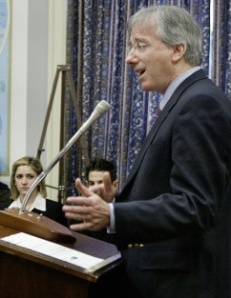 Once the framework of a deal is worked out, further details will be added over the years after regular meetings that Obama wants between Netanyahu and Abbas. The plan is to be fully implemented within 10 years

To hammer out the deal, Israeli and Palestinian peace teams would meet in secret locations for the next year. The deal would focus on settlements, the future of Jerusalem and the borders

The Mondoweiss site found the news of the Ross briefing in the Israeli newspaper Yedioth Ahronoth. The article, which was in Hebrew, was translated by Didi Remez on his blog Coteret.

The Jewish newspaper Forward reported on the “off the record” call:

The Jewish leaders pressed for details: Is there a deadline? Will there be preconditions? In response, according to people on the call, they got little more than the vague back-and-forth that had characterized the announcement of the talks earlier in the day by Secretary of State Hillary Rodham Clinton.

Dan Shapiro, the top National Security Council staffer handling Israel and its neighbors, broke in to add that the talks would be “intensive.”

Ross is back in his familiar role as Israel’s most powerful friend in the White House. He is currently Obama’s s top National Security Council Middle East strategist.

Palestinian activist and author Daoud Kuttab, writing for Huffington Post in January, 2009, when Ross was appointed as a key aide to Obama, recalls that after the failure of the Clinton-Arafat summit in 2000, in which Ross played a major role:

It was Ross who led the chorus of Israeli apologists placing all the blame for the failure of the talks on the Palestinian leader. Ironically, Ross, himself, was the person who convinced Arafat to go to Camp David after solemnly promising him that neither side will be publicly blamed if the talks fail.

Palestinian president Arafat had told Ross that the time was not ripe for a summit but Ross, in connivance with [Israeli Prime Minister] Barack, attempted to railroad a bad deal down Arafat’s throat. Arafat, who felt that the deal was very bad for Palestinians, asked his US hosts if they can get the support of Arab leaders, they were unable to.

No big surprise in Laura Rozen’s new piece that Dennis Ross, a central figure in the pro-Israel lobby, a protege of Paul Wolfwitz, the co-founder of the AIPAC-founded, Washington Institute For Near East Policy, and a fervent believer in Israel’s eternal control of all of Jerusalem (meaning a two-state solution will never happen), is the main pro-Netanyahu voice in the Obama administration

Ross was in Tel Aviv this past week ‘to resolve the settlement freeze triangle,’” an Israeli source told Politico, a reference to whether or not Israel would agree to extend a freeze on Israeli settlement building currently due to expire Sept. 26.

Ross met with Netanyahu and his Israeli negotiator Yitzhak Molcho. He did not meet with any Palestinian officials.

That second-level meeting was left to David Hale, the deputy to the Middle East peace envoy George Mitchell and the NSC’s Dan Shapiro. The State Department told Politico that Hale and Shapiro met with both Israeli and Palestinian officials to prepare for the direct talks in Washington. The State Department had no comment on Ross.

With all pretense now dropped that the US is an “honest broker” for the Palestinians and Israelis, a claim that President Clinton used to drag Arafat to the failed Camp David talks in 2000, what should we expect from the 2010 round of Washington peace talks?

That is an easy one. We may expect that the outcome of Washington 2010, will be what Bibi wants and has agreed to in advance.

We must therefore look elsewhere for any indication that Netanyahu will use his control of the talks to do any favors for Abbas.

Netanyahu has less control over his own public than he does over the White House and Israel’s supporters in the US.  And the Israeli leader may now be thinking of his legacy. Does he want to be just another Israeli power figure, or can he bring some semblance of peace to the region before he retires?

Aluf Benn posed that question in a provocative column he wrote for Ha’aretz:

The opening of the direct talks with the Palestinians again raises the question: Who is Benjamin Netanyahu?

Is he our Gorbachev, a great reformer who will end Israeli rule in the territories? A “Nixon who went to China” – a right-winger who disavowed his former approach and changed the balance of power with a brilliant diplomatic stroke?

Or is he the “old Bibi” depicted by his rivals, the illusionist who is afraid of daddy Benzion and wife Sara, the uptight leader who flinches from making decisions and passes time by dribbling the ball?

Netanyahu might choose to pay attention to that small but vocal segment of Israeli citizens who know the Occupation is wrong and dangerous to Israel’s future. These peace activists and humanitarians in Israel are largely ignored in the US Main Stream Media, but they are able to attract attention in the rest of the world with bold actions that highlight Palestinian suffering.

Nearly 600 Israelis have signed up for a campaign of civil disobedience, vowing to risk jail to smuggle Palestinian women and children into Israel for a brief taste of life outside the occupied West Bank

The Israelis say they have been inspired by the example of Ilana Hammerman, a writer who is threatened with prosecution after publishing an article in which she admitted breaking the law to bring three Palestinian teenagers into Israel for a day out.

Ms Hammerman said she wanted to give the young women, who had never left the West Bank, “some fun” and a chance to see the Mediterranean for the first time.

It is illegal to transport Palestinians through checkpoints into Israel without a permit, which few can obtain. If tried and found guilty, Ms Hammerman could be fined and face up to two years in jail.

But Israelis joining the campaign say they will not be put off by threats of imprisonment.

Last month, a group of 11 Israeli women joined Ms Hammerman in repeating her act of civil disobedience, driving a dozen Palestinian women and four children, including a baby, through a checkpoint into Israel.

The Israeli women say they are planning mass “smugglings” of Palestinians into Israel over the coming weeks.

These women have broken free from the historic Jewish sense of persecution which Uri Avnery describes in his most recent Gush Shalom column.

As the jolly song of the 70s goes: “The whole world is against us / That’s not so terrible, we shall overcome. / For we, too, don’t give a damn / For them. // … We have learned this song / From our forefathers / And we shall also sing it / To our sons. / And the grandchildren of our grandchildren will sing it / Here, in the Land of Israel, / And everybody who is against us / Can go to hell.”

The writer of this song, Yoram Taharlev (“pure of heart”) has succeeded in expressing a basic Jewish belief, crystallized during the centuries of persecution in Christian Europe which reached its climax in the Holocaust. Every Jewish child learns in school that when six million Jews were murdered, the entire world looked on and didn’t lift a finger to save them.

This is not quite true. Many tens of thousands of non-Jews risked their lives and the lives of their families in order to save Jews – in Poland, Denmark, France, Holland and other countries, even in Germany itself. We all know about people who were saved this way – like former Supreme Court President Aharon Barak, who as a child was smuggled out of the ghetto by a Polish farmer, and Minister Yossi Peled, who was hidden for years by a Catholic Belgian family.

These Israeli women smugglers think for themselves. They do not allow their tribal history to dictate to them those things which are “not quite true.”

These are women who are willing to risk Israeli prison sentences to show the world the moral side of their nation by introducing Palestinian women (above) and children to the beaches of Israel (at top), beaches that are close, in meters, to the West Bank, and yet so far from their Palestinian prison of  Occupation.

The Washington peace summit will not bring Netanyahu to his senses. He is only attending to make a few cosmetic compromises to burnish his image as a “peace maker”.

To force Bibi to face the reality of Israel’s future, we must rely heavily on women like the 600 Israeli smugglers.

The picture at top was taken at a Hof Dor beach on Israel’s Mediterranean coast between Haifa and Tel Aviv. I have no idea if this is a beach to which the women smugglers will take their guests. And even if I did know, I would not tell you. You can find other beaches like the one at Hof Dor on the internet. They are important to the Israeli tourist business. (The picture of the three women above is from the website “Israel:The Only Democracy in the Middle East?”.)

7 Responses to Bibi Controls The Summit; Can He Control Israeli Women Smugglers?