Rahm and the General Are Gone; Time to Put Freeman Back to Work 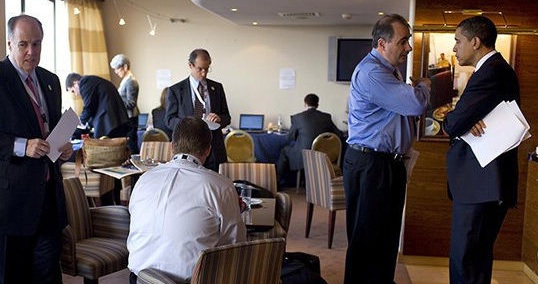 We have two weeks to endure until November 2, that blessed day when these depressing mid term elections finally give the nation a new congress.

Once those elections are over, President Obama has at least two more years in which he must work around the Congress and address himself to restoring moral fiber to his handling of the atrocious conduct of the Netanyahu-Lieberman government of Israel.

I suggest he start by restoring Charles Freeman to a position of influence in his administration.

Freeman’s removal in March, 2009, was an early signal that Obama was more interested in appeasing the Zionist forces in the Congress, in Israel, and within his own White House team, than he was in taking bold steps toward ending the slaughter of innocents that continues under the guise of the latest Peace Talks charade.

More than a year and a half after his sudden departure from the White House, courtesy of AIPAC, Freeman is still speaking his mind.  On October 15, of this year,  he spoke at Tufts University. He opened his speech:

As an American, I look at the results of U.S. policies in the Middle East and they remind me of the T-shirt someone once gave me. It said: “Sinatra is dead. Elvis is dead. And me, I don’t feel so good.”

The Middle East is a constant reminder that a clear conscience is usually a sign of either a faulty memory or a severe case of arrogant amorality. It is not a badge of innocence. These days, we meticulously tally our own battlefield dead; we do not count the numbers of foreigners who perish at our hands or those of our allies. Yet each death is a tragedy that extinguishes one soul and wounds others. This deserves our grief. If we cannot feel it, we may justly be charged with inhumanity.

All that is required to be hated is to do hateful things. Apparent indifference to the pain and humiliation one has inflicted further outrages its victims, their families, and their friends. As the Golden Rule, common – in one form or another – to all religions, implicitly warns, moral blindness is contagious. That is why warring parties engaged in tit for tat come in time to resemble each other rather than to sharpen their differences. (For more of the speech, click here.)

That is the wisdom Obama needs for the next two years, and longer, if, inshallah, he wins a second term. It is time for President Obama to bring Charles Freeman back into service.

Peter Rouse has said he does not want to be Chief of Staff for long. Tom Donilon has the right credentials to replace Rouse. That would leave the National Security Advisor post open for Charles Freeman.

The 2009 ousting of Freeman from the Obama administration came “within a month” after he was appointed, roughly the same span of time that it took Hamlet’s mother to invite a second husband to her “incestuous sheets”. Most unseemly.

To read more on the background of the Freeman affair in Link magazine, click here.

Freeman’s firing was an ominous development which suggested the new president would not stand up to the right wing pro-Israel forces that had grown accustomed to determining US policy in the Middle East.

At the time, Lauren Rozen reported at Foreign Policy.com that “the NIC is the official in-house think tank of the intelligence community. It takes input from 16 intelligence agencies and produces what are called ‘national intelligence estimates’ on crucial topics of the day as guidance for Washington policymakers.”

It looked like a natural choice.  Freeman, an experienced diplomat, was fluent in Mandarin Chinese, and had served diplomatic posts in Latin America, Asia, and Africa. His Middle East credentials included a stint as a U.S. ambassador to Saudi Arabia during the first Gulf War. He was also a former assistant secretary of defense during the Reagan administration.

A wry, outspoken iconoclast, Freeman had, however, crossed one of Washington’s red lines by virtue of his strong criticism of the U.S.-Israeli relationship. Over the years, he had, in fact, honed a critique of Israel that was both eloquent and powerful. Hours after the Foreign Policy story was posted, Steve Rosen, a former official of the American Israel Public Affairs Committee (AIPAC), launched what would soon become a veritable barrage of criticism of Freeman on his right-wing blog.

Rosen himself has already been indicted by the Department of Justice in an espionage scandal over the transfer of classified information to outside parties involving a colleague at AIPAC, a former official in Donald Rumsfeld’s Pentagon, and an official at the Israeli embassy.

His blog, Obama Mideast Monitor, is hosted by the Middle East Forum website run by Daniel Pipes, a hard-core, pro-Israeli rightist, whose Middle East Quarterly is, in turn, edited by Michael Rubin of the American Enterprise Institute. Over approximately two weeks, Rosen would post 19 pieces on the Freeman story.

New York Democratic Senator Charles Schumer, an AIPAC loyalist, later bragged about his role in getting Freeman removed from his position as chairman of the NIC. He said he made a phone call to the White House.  Apparently, that was the final shove Obama needed to force Freeman’s departure.

Freeman did not go quietly.  This response to his firing should have been a warning to the new president, coming as it did from a man with a considerably stronger foreign policy resume than either the president or his new chief of staff, Rahm Emanuel, possessed. Freeman said:

There is a special irony in having been accused of improper regard for the opinions of foreign governments and societies by a group so clearly intent on enforcing adherence to the policies of a foreign government — in this case, the government of Israel. I believe that the inability of the American public to discuss, or the government to consider, any option for US policies in the Middle East opposed by the ruling faction in Israeli politics has allowed that faction to adopt and sustain policies that ultimately threaten the existence of the state of Israel… This is not just a tragedy for Israelis and their neighbors in the Middle East; it is doing widening damage to the national security of the United States.”

Rahm Emanuel left his White House chief of staff position on October 1, just in time to launch a campaign for mayor of Chicago. Rahm beat General James out the door by a week. Jones resigned October 8 as Obama’s National Security Advisor. Both men got away before they had to watch the November 2 election returns inside the White House.

Rahm’s replacement is Pete Rouse, a veteran staffer who knows the Senate even better than Rahm knew the House. Jones has been replaced by Tom Donilon, a younger man (55) who is a respected staff operator. Donilon has been criticized by Jones, if Bob Woodward’s book is to believed, for lacking foreign policy credentials.

The London Economist, however, describes Donilon as “a foreign-policy intellectual who appears to have read everything”, good credentials for a staffer working for the extremely well-read Obama.

Rouse and Donilon are both close to the president. Neither man brings a world view anywhere remotely as broad and insightful as that of Charles Freeman.

As the NSA director, Charles Freeman would be quick to see the value in Obama meeting with other world leaders who understand the dangers of “moral blindness”.

He could start with arranging a meeting at the White House with The Elders.

The Elders’ website reports on the trip this weekend:

The Elders are on a week-long visit to the Middle East to encourage support across the region for the current final status negotiations, with emphasis on the need to reach a just and secure peace for all. They also want to draw attention to issues that cannot be ignored if there is to be a sustainable agreement – including the blockade of Gaza and the political isolation of the Hamas leadership from the peace process.

Former Irish President, Mary Robinson, is leading the delegation. This is her initial reaction to the trip to Gaza:

I was last here in 2008, just before the Gaza war. The situation has deteriorated to a shocking extent since then. This is not a humanitarian crisis – it is a political crisis and it can be solved politically. It is unconscionable and unacceptable that Israel and the international community have not lifted the blockade fully to allow Gazans to rebuild their lives and be part of the interconnected world that we take for granted.

The easing of the blockade may mean more goods can be imported, but people are not free to come and go, reconstruction materials are still highly restricted, there is no real economy to speak of, and I have no doubt that things are not just stagnant – they are going backwards.

The appointment of Freeman as Obama’s new NSA would be a declaration of independence for the president, an independence from the forces that for two years have persuaded Obama to follow a dark path that has left both Palestinians and Israelis locked in a death dance.

The picture above is one of a series of candid  photos supplied by http://www.Whitehouse.gov. It was taken when the President was in Strasborg, France, May 4, 2009. The president is at right talking with staff aide David Alexrod. Tom Donilon, now the NSA, is at the far left.

From 1972 through 1999, James M. Wall was editor and publisher of the Christian Century magazine, based in Chicago, lllinois. He was a Contributing Editor of the Century from 1999 until July, 2017. He has written this blog, wall writings.me, since it was launched April 27, 2008. If you would like to receive Wall Writings alerts when new postings are added to this site, send a note, saying, Please Add Me, to jameswall8@gmail.com Biography: Journalism was Jim's undergraduate college major at Emory University, Atlanta, Georgia. He has earned two MA degrees, one from Emory, and one from the University of Chicago, both in religion. He is an ordained United Methodist clergy person. He served for two years in the US Air Force, and three additional years in the USAF reserve. While serving on active duty with the Alaskan Command, he reached the rank of first lieutenant. He has worked as a sports writer for both the Atlanta Journal and Constitution, was editor of the United Methodist magazine, Christian Advocate for ten years, and editor and publisher of the Christian Century magazine for 27 years.
View all posts by wallwritings →
This entry was posted in Middle East Politics, Religion and politics. Bookmark the permalink.

7 Responses to Rahm and the General Are Gone; Time to Put Freeman Back to Work