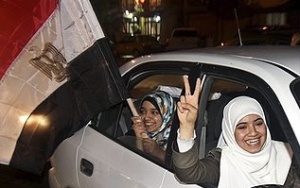 The Obama administration was not prepared for the Egyptian revolution. Nicholas Kristof knows this. He is highly critical of the US approach when he writes:

Egyptians triumphed over their police state without Western help or even moral support.

During rigged parliamentary elections, the West barely raised an eyebrow. And when the protests began at Tahrir Square, Secretary of State Hillary Rodham Clinton said that the Mubarak government was “stable” and “looking for ways to respond to the legitimate needs and interests of the Egyptian people.”

To be charitable, this was not our finest diplomatic moment. Paul Woodward is even tougher on the Obama team:

Commentators have repeatedly referred to the Obama administration playing catch-up during the Egyptian revolution, yet its seeming inability to track fast-changing events was merely an expression of its unwillingness to embrace the direction those events were heading.

Immediately after Hosni Mubarak resigned, Jake Tapper from ABC News tweeted that he couldn’t find anyone in the administration who thought that whatever comes next would be better for U.S. interests than Mubarak had been.

We should have seen this coming, this moment in history when the US failed to embrace what Woodward correctly sees as “the most significant transformation in world order since the birth of Western colonial power.”

The overthrow of President Mubarak should have been anticipated as an inevitable moment of change.

A major signal in the change came on April 6, 2008, when a nationwide textile workers’ strike failed.  The Los Angeles Times reported the failure at the time:

Egyptians might be mad, but they are not ready for revolt. Riot police and a public skittish about confronting the government of President Hosni Mubarak led to a failed nationwide strike on Sunday.

Activists had hoped that an Internet campaign and text messaging would arouse enough passion to get hundreds of thousands of Egyptians into the streets to protest low wages and spiraling inflation.

Instead, they got a whimper. The focal point was to be the big textile plant in the Nile Delta at Mahalla. The plant has come to symbolize labor and public unrest over Mubarak’s policies. But police seized the factory before dawn and prevented thousands of workers from striking.

Similar rallies were squelched across the country, including at Tahrir Square in Cairo. About 30 activists were arrested, but the atmosphere was relatively calm.

By January 2009, the April 6 movement reported a membership of 70,000 predominantly young and educated Egyptians, most of whom, Wikipedia reports, “had not been politically active before”. The movement focused on “free speech, nepotism in government and the country’s stagnant economy.” These issues were discussed on Facebook.

The April 6 movement uses the same symbols as the Otpor! movement from Serbia which is credited with helping “to bring down the regime of  Slobodan Milošević and whose tactics were later used in Ukraine and Georgia.” In a further gesture of pragmatic solidarity, Otpor provided on the ground training for the April 6 movement.

The April 6 movement emerged from this early failure. It was this movement that generated much of the power behind the recent overthrow of Mubarak. Asmaa Mahfouz, 26, a young Egyptian activist, who is widely credited with the founding of the April 6 Youth Movement, rallied Facebook followers with a series of video blogs.

On Feburary 8, during the massive demonstrations in Tahrir Square, Amy Goodman posted an historic video blog on her site, Democracy Now. She introduced the Vblog this way:

Three weeks ago today, 26-year-old Egyptian activist Asmaa Mahfouz posted a video online urging people to protest the “corrupt government” of Hosni Mubarak by rallying in Tahrir Square on January 25.  Her moving call ultimately helped inspire Egypt’s uprising. “I, a girl, am going down to Tahrir Square, and I will stand alone. And I’ll hold up a banner. Perhaps people will show some honor,” Mahfouz said.

“Don’t think you can be safe anymore. None of us are. Come down with us and demand your rights, my rights, your family’s rights. I am going down on January 25th and will say no to corruption, no to this regime.”

The Obama White House was not ready for this change because its major players viewed Egypt from an Israeli perspective. They were not paying attention to Asmaa Mahfouz.

Cobban is a veteran Middle East observer and now a blogger. Recently she wrote:

The campaign against anyone with regional expertise– the so-called “State Department Arabists”– was launched in the public sphere by the dreadful know-nothing Robert Kaplan . . . .

It got a strong foothold throughout the federal bureaucracy– and far more broadly than in just the State department– with the arrival of President Clinton in 1993. Clinton, that is, who brought along as his key advisers on the affairs of the whole region the two long-time pro-Israel activists Dennis Ross and Martin Indyk!

Then, of course, under [George W Bush], we had Elliott Abrams and rest of the neocons running regional affairs for the government. . . .

So now, in the Oval Office, [there is] no Chas Freeman, no Bill Quandt, no Rob Malley… (The list of those excluded on ideological grounds is pretty long, too.)

No one, in short, who can integrate into the advice the President desperately needs to hear any real understanding of how the peoples of the region think and how the regional system actually works. God save us all from their self-inflicted ignorance.

The Kaplan book Cobban cites is Arabists: The Romance of an American Elite.

When I first read Kaplan, I recall appreciating the fact that someone took seriously the Protestant missionary endeavor in the region. But as you proceed through the book it becomes apparent that Kaplan, then and now a columnist for The Atlantic, was describing the Christian concern for Arabs as naive and detrimental to the new Jewish state.

He was wrong, of course. The Christian missionaries were not naive. They were evangelical and idealist. Once they realized that the Muslim population had its own well established religion, the Protestants switched over to education and health.

Many children and grandchildren of those original missionaries did, indeed, enter US foreign service because they had a love for, and a concern for, the inhabitants of the region.

These “Arabists” soon became influential in the State Department, men and women who knew the history, the language, the religion and the culture of the region. When the state of Israel was created by the UN, it was over the strong objection of the Arabists. They knew a European transplanted state would lead to trouble with Arab neighbors.

They were right. Supporters of the new state of Israel quickly moved into positions of political power in the US.  Their first task was to reduce the influence of the Arabists in the government. They were very successful.

When President Obama assembled his team of advisors last week to discuss the situation in Egypt, Helen Cobban reports that no one in the room had “any serious knowledge about either Egypt or the broader region.”

He was meeting with advisors vetted and approved by the Israel Lobby, thus insuring that President Obama made his decision on how to respond to the Egyptian revolution surrounded entirely by advisors who asked, “how does this affect Israel.”

An analysis in the New York Times was less blunt than Cobban but in assessing the mood in the room with Obama and his advisers, the Times also noted the staff differences:

A president who himself is often torn between idealism and pragmatism was navigating the counsel of a traditional foreign policy establishment led by Mrs. Clinton, Mr. Biden and Defense Secretary Robert M. Gates, against that of a next-generation White House staff who worried that the American preoccupation with stability could put a historic president on the wrong side of history.

The traditionalists–Clinton, Biden and Gates–may not concur with Israel’s belief that the Muslim Brotherhood is a major threat to Israel, but they are very much aware that it is a fear that drives Israeli leaders.

A top priority among the advisors was Israel’s fear that “Islamists”, in this case the Muslim Brotherhood, might assume power in Egypt and abrogate the peace treaty between Israel and Egypt. Israel backers point to Iran as a model to be avoided.  The analogy is not a good one.

Egypt’s population of 83 million is much more akin to the Turkey model where in recent years a secular government successfully rules a state whose religion is Islamic, while its government is secular.

The American media reading of Egypt is so locked into the Israeli narrative that it automatically dismisses a role for the Muslim Brotherhood in a future Egyptian government.

President Obama need not depend entirely on his White House team to instruct him on the Brotherhood.  He lives close to one of the country’s leading authorities on Muslim-Christian relations, John L. Esposito, Professor of Religion and International Affairs at Georgetown University.

In a CounterPunch piece on the Muslim Brotherhood, Esposito wrote:

Will the departure of Mubarak mean the “threat” of an Islamist takeover, instability and social chaos?

Gallup World Poll polling found that while majorities of Egyptian Muslims believe religion is important to their spiritual lives and to progress, they also want greater democratization, freedoms and the rule of law.

In fact those in the region were the most likely to say that greater democracy and attachment to spiritual and moral values would contribute to a brighter future. But, does regime change mean a Muslim Brotherhood takeover?

Since the late 20th century, far from being advocates of religious extremism, the Muslim Brotherhood like other Islamically-oriented candidates and political parties in Algeria, Tunisia, Morocco, Egypt, Lebanon, Turkey, Jordan, Kuwait, Bahrain, Pakistan, Malaysia, and Indonesia have opted for ballots, not bullets.

Among the Brotherhood’s most vigorous critics (and enemies) have been Egyptian militants, including Al-Qaeda’s Ayman al-Zawahiry. For decades the Muslim Brotherhood, though officially illegal, has proven to be the largest and most effective non-violent opposition movement, politically and socially within mainstream Egyptian society.

It and other Islamic organizations have provided an effective social service network of schools, medical clinics, and youth camps, an effective alternative an indictment of the government’s inability to deliver. Politically, despite government persistent provocation — harassment, arrest, imprisonment and violence against the Brotherhood, it has remained non-violent.

The picture at the top of two women in Cairo is an AP photo by Adel Hana.

From 1972 through 1999, James M. Wall was editor and publisher of the Christian Century magazine, based in Chicago, lllinois. He was a Contributing Editor of the Century from 1999 until July, 2017. He has written this blog, wall writings.me, since it was launched April 27, 2008. If you would like to receive Wall Writings alerts when new postings are added to this site, send a note, saying, Please Add Me, to jameswall8@gmail.com Biography: Journalism was Jim's undergraduate college major at Emory University, Atlanta, Georgia. He has earned two MA degrees, one from Emory, and one from the University of Chicago, both in religion. He is an ordained United Methodist clergy person. He served for two years in the US Air Force, and three additional years in the USAF reserve. While serving on active duty with the Alaskan Command, he reached the rank of first lieutenant. He has worked as a sports writer for both the Atlanta Journal and Constitution, was editor of the United Methodist magazine, Christian Advocate for ten years, and editor and publisher of the Christian Century magazine for 27 years.
View all posts by wallwritings →
This entry was posted in Middle East, Middle East Politics. Bookmark the permalink.