Why Was This Man Standing At A Podium Before the US Congress? 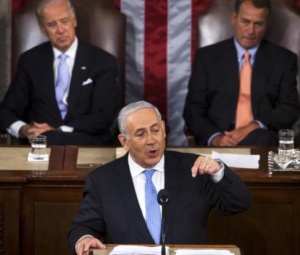 This picture of Israeli Prime Minister Benjamin Netanyahu laying down the law to the US Congress is not just a portent of things to come. It is, in fact, a portrait of who really runs US foreign policy.

While many Americans were watching Oprah or worrying about steroids ruining baseball, Israel assumed control of our government. The picture (above) of Netanyahu lecturing Congress, was orchestrated by Republican House Speaker John Boehner with the help of all those other Zionist politicians we elected to office in campaigns financed by the Israel Lobby.

Two things stand out about the cheering Congressional mob that greeted the Prime Minister’s series of lies and distortions:

One, the American media accepted this insult to the current American president with barely a whimper of protest.  Their real leader had spoken and who are they to say otherwise.

Two, the Congress cheered statements about which they were either ignorant, or had been warned by leaders of both parties, not to disagree.

In case you were watching American Idol during the speech, you should know that this intruder to the podium of our Congress was actually cheered when he asserted that:

There is no occupation of Palestinian land because “in Judea and Samaria [better known except to biblical literalists, as the West Bank], Israelis are not foreign occupiers”. They are, Netanyahu obviously wants us to believe, the native inhabitants.

Would that explain Israel’s building of that Great Wall to separate Israel Proper from the land of Judea and Samaria? That wall looks biblical. Netanyahu cited Abraham in his speech to the Congress as a rationale for Israel’s claim to occupied land. Could that Wall come tumbling down with a few well placed toots on a horn?

Is Sarah Palin writing Netanyahu’s speeches? Talk about your distortion of history. Geeze. Has there ever been a surrender moment more filled with fantasy?

The sight of a right-wing Zionist leader standing at the podium normally reserved for American presidents, and harshly repudiating the current president, was sad in the extreme.

We could only hope that Barack Obama, this son of Kenya and Kansas, would respond to this insult to him and to his nation, with a repudiation of Bibi’s speech.

Alas, it was not to be.  Instead, we get this depressing report about a little-noticed new addition to the White House web site. The announcement came after the Prime Minister’s speech, not from the New York Times, but from Philip Weiss, co-founder of Mondoweiss. The White House site may be accessed here.

There is one reference to the status quo being “unsustainable,” but all references to Palestinians are calls on them to advance peace and [halt] terrorism. Most of the site is about Israel’s security. Iran has a whole section. The word “settlements” is not mentioned. 1967 is mentioned.

Talk about “walking back” from the firm focus President Obama put on the 1967 borders in his recent speeches, consider how the White House’s “we love Israel” web page explains the border’s reference:

“[T]he parties themselves will negotiate a border that is different than the one that existed on June 4, 1967 to account for the changes that have taken place over the last 44 years…”

Translation: Not to worry, you holders of the big dollars we need for reelection. We love what you have done with the occupied property since you stole it 44 years ago.  We see no reason to make changes. Who’s your decorator?

It is not as though we did not know this total capitulation to Israel was coming. Many people knew and tried to warn us.

An important early warning signal is found in the work of Jewish historian Simha Flapan, who knew exactly what Israel had in mind. He gave the details in his remarkably prophetic 1987 book, The Birth of Israel: Myths and Realities.

Flapan died, in Tel Aviv, on April 13, 1987, just as his book was going to press. The book is now, unfortunately, out of print (Amazon offers a rare new paperback copy for $89.99, and a few used copies for much less). It remains one of the most significant documents to emerge from that small band of Jewish writers who labored in the 1970s and 80s to sound the alarm about Israel’s plans for the conquest of all of Palestine.

I own a treasured paperback copy of The Birth of Israel. Flapan is, for me, a mentor and a writer I often turn to when his prophecies become especially pertinent. Richard Falk wrote this on the book’s cover: “A work of extraordinary integrity and of great significance for all those who favor a humane peace in the Middle East.”

Early in his book, Flapan described the mindset of the Israeli people. Notice his reference to “atomic” capability.

Even though Israel has the most sophisticated army in the region and possesses an advanced atomic capability, it continues to regard itself in terms of the Holocaust, as the victim of an unconquerable, bloodthirsty enemy. Thus whatever Israelis do, whatever means we employ to guard our gains or to increase them, we justify as last-ditch self-defense. We can, therefore, do no wrong. The myths of Israel forged during the formation of the state have hardened into this impenetrable, and dangerous, ideological shield.

That shield, now firmly established in the US, has been so effective that when Netanyahu declared victory before the US Congress, the members stood and cheered. And the American media assumed, from behind their “ideological shield”, that the speech was nothing more than “business as usual”.

Of course, since Netanyahu is not a native-born American citizen, he cannot be elected president of the United States. (He graduated from a Pennsylvania high school, but that does not count.) There are, however, a few notable candidates from both American political parties ready to swear their dual allegiance to the US and Israel and run for the office of the Leader of the Free World.

There is Sarah Palin, who is easily manipulated by advisors. She loves Israel. And there is a more serious Democratic candidate, the newly-elected Mayor of Chicago, a fellow named Rahm Emanuel, whose parents are native-born Israelis. Emanuel, himself, has a American birth certificate, so he is good to go in 2016.

Matter of fact, Emanuel has issued his first major campaign speech for that campaign.  It was published in the Washington Post, which is working hard to replace the New York Times as the leading Zionist newspaper in the US.

Here is the start of Emanuel’s column, which praises both Obama and the native land of Emanuel’s parents, the country for which the new mayor served a brief stint as a volunteer in the Israel Defense Forces, at the time of the Iraq war.

Days into my tenure as mayor of Chicago, with my focus on keeping our city’s streets safe, our schools strong and our finances stabilized, I expected my attention to be in the Midwest, not in the Middle East. But as an American and the son of an Israeli immigrant, I have a deep, abiding commitment to the survival, security and success of the state of Israel.

I am among the many who know that the Israeli people yearn for peace. They have taken risks for peace in spite of dangers. They will again, when they have a viable partner in the process and a region that recognizes a Jewish state of Israel with secure and defensible borders.

Emanuel’s Post column was ostensibly a pean of praise for President Obama, the man whom the new Mayor served as Chief of Staff. As he wrote in the column, as a new mayor, his focus should now be on keeping the “city’s streets safe, our schools strong and our finances stabilized”.

Worthy goals, all, but then, notice that in his debut column he is writing not for his current hometown paper, but for the hometown paper of the White House.

The column will serve as a reminder to those generous donors who share his love for Israel. Those names are, no doubt, nestled safely in Emanuel’s Blackberry. It was in 1983 that I first saw an early version of those names. Rahm kept them in an ancient device we called the Rolodex.

At the time, I was Paul Simon’s campaign manager in his first US Senate primary race.  The 23-year-old Emanuel was our campaign’s resident AIPAC representative, paid, not by AIPAC (which, as a non-profit organization, does not make direct financial political contributions) nor by the Simon campaign, since I had refused to authorize payment, but by some of those generous donors whose names were in that Rolodex.

And now, just think, the journey that started in the Simon 1983-84 campaign office, could finally end with Rahm Emanuel standing where Benjamin Netanyahu stood during the 2011 surrender ceremonies.  Ain’t history grand?

The picture of  Prime Minister Netanyahu speaking to Congress is from Al Jazeera. The picture of Mayor Emanuel with President Obama is from the London Guardian, published during Emanuel’s days in the White House.

Update note: At the suggestion of an alert reader, I have decided to stop referring to the Prime Minister of Israel by his nickname, “Bibi”. The reader pointed out that my use of the Prime Minister’s nickname implied that we were best buddies. We are not.

The changes are reflected in this update.  One caveat: In future headlines, I may be forced to utilize the shorter nickname for space purposes.  I thank the reader for calling this to my attention.

From 1972 through 1999, James M. Wall was editor and publisher of the Christian Century magazine, based in Chicago, lllinois. He was a Contributing Editor of the Century from 1999 until July, 2017. He has written this blog, wall writings.me, since it was launched April 27, 2008. If you would like to receive Wall Writings alerts when new postings are added to this site, send a note, saying, Please Add Me, to jameswall8@gmail.com Biography: Journalism was Jim's undergraduate college major at Emory University, Atlanta, Georgia. He has earned two MA degrees, one from Emory, and one from the University of Chicago, both in religion. He is an ordained United Methodist clergy person. He served for two years in the US Air Force, and three additional years in the USAF reserve. While serving on active duty with the Alaskan Command, he reached the rank of first lieutenant. He has worked as a sports writer for both the Atlanta Journal and Constitution, was editor of the United Methodist magazine, Christian Advocate for ten years, and editor and publisher of the Christian Century magazine for 27 years.
View all posts by wallwritings →
This entry was posted in Media, Middle East Politics. Bookmark the permalink.

17 Responses to Why Was This Man Standing At A Podium Before the US Congress?