Does Israel Interfere in US Elections?

Israel’s ambassador to the US, former American citizen Michael Oren, (at right) trotted out a classic Zionist strategy when he sent a letter to the New York Times  denying that Israel is “interfering” in the American presidential campaign.

Oren’s letter was reported in the Israeli newspaper Ha’aretz on April 12, under the headline:

“Israeli ambassador to New York Times: Netanyahu does not interfere in U.S. elections”

This Ha’aretz headline was followed by a sub headline, stating:

Michael Oren, Israel’s ambassador in Washington, submits letter to the editor to NYT, complaining about  an article detailing the close relationship between Netanyahu and likely Republican presidential nominee Mitt Romney.

The problem with Oren’s attack is that the Times story did not use the term “interfering”. The ambassador denies something the story does not claim.

Oren’s letter skillfully ignores the facts of the story under a theoretical cloud of his own making. He also manages to bring attention to his Israeli public to a story which promises good things ahead if Romney is elected.

The facts of the Times story which Oren distorts are that Prime Minister Benjamin Netanyahu and Republican presumptive presidential nominee, Mitt Romney, have a long-standing personal relationship.

The implication of the Times story is that if Romney is elected US president, the Israeli Prime Minister will have a pal in the White House. To Israelis and to Israeli loyalists in the US, this is good news.

By calling attention to the story with his faux outrage, the Ambassador is playing the role of police official Captain Renault (Claude Rains) who confronts his friend, nightclub owner, Rick (Humphrey Bogart) in the 1942 World War era film, Casablanca.

Captain Renault tells Rick he will close his club. 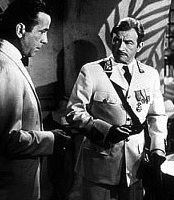 Rick: How can you close me up? On what grounds?
Captain Renault: I’m shocked, shocked to find that gambling is going on in here!
[a croupier hands Renault a pile of money]
Croupier: Your winnings, sir.
Captain Renault: [sotto voce] Oh, thank you very much.
[aloud]
Captain Renault: Everybody out at once!

Of course the Israeli government interferes in US politics and the presidential race is the big kahuna. Israel’s domestic US warriors, led by the heavy-hitters from AIPAC, are deeply embedded in the 2012 elections.

Ambassador Oren knows it; everyone who pays attention knows it. But like the nuclear arsenal Israel has built in the Israeli desert, the media and politicians do not speak of it. They do not want to be branded as anti-Israel.

Who better than an American-Israeli academic turned government official than Michael Oren, to carry Israel’s cause into US domestic politics even as he does not speak openly of the patently obvious.

Why is Michael Oren a natural for his job as ambassador?

A flattering Times profile of the new Ambassador described his background when he was appointed in September, 2009.

But having lived most of his adult life in Israel — serving multiple tours in the Israeli Army, once as a paratrooper during the 1982 Lebanon war — he also considers himself genuinely Israeli.

Prime Minister Netanyahu, who also spent parts of his youth in the US, chose Oren for his new position for moments like this one, as the presidential race is finally narrowed down to Obama versus Romney.

The Times profile looks back to those early formative years:

Mr. Oren’s fervent Zionism dates from his childhood, though it was hardly inevitable. He grew up as Michael Bornstein in a conservative, but not politically active, family in West Orange, N.J. His father was the director of Newark Beth Israel Medical Center.

At 15, Mr. Oren told his parents he wanted to move to Israel to work on a kibbutz. His parents were aghast, but they did not stop him when he talked his way into a job on an alfalfa farm, even though he was two years shy of the minimum age.

A job as a cowboy on the Golan Heights followed, as well as athletic glory as an oarsman in the Maccabiah Games, where thousands of Jewish athletes from around the world compete every four years.

Steeped in the double speak of US politics, the Ambassador is skilled at the classic political tactic, which Zionist operatives have long utilized, of denying facts that do not exist, and then diverting attention from those manufactured facts to a different topic.

I once worked for a charming editorial director who had his own unique style in pursuing the same tactic.

Faced with unpleasant facts he would say, “What else do you want to talk about?” As the boss, he set the agenda, especially when he spoke with younger underlings.

Ambassador Oren had to renounce his American citizenship to accept his appointment as Israel’s man in Washington. Was that difficult?  You be the judge.

This is how Oren explained his decision in the 2009 Times profile by Mark Landler:

For Michael B. Oren, the hardest thing about becoming Israel’s ambassador to the United States was giving up his American citizenship, a solemn ritual that involves signing an oath of renunciation.

He said he got through it with the help of friends from the American Embassy in Tel Aviv who “stayed with me, and hugged me when it was over.”

After those reassuring hugs in Tel Aviv, newly recruited Israeli citizen Oren has dutifully adhered to whatever script his Tel Aviv bosses dictate, which is what an ambassador is supposed to do.

Oren’s background and his intense loyalty to his new country, provide the right mix of Zionism and American savvy which Israel needs as pressure builds on Israel to finally embrace the democratic ideals it claims to possess.

Ambassador Oren has yet to weigh in on the German Nobel prize winning author Gunter Grass episode.

But rest assured, if Time and Newsweek had not adhered to the Zionist script when reporting on the “furor” over the Grass poem, This Must be Said, Oren would have been all over the editors of those leading national weeklies.

Those two publications already knew how to respond. They joined with the international media mob that presented the Grass story as a battle between the righteous Israeli government and a “Nazi-tainted” Grass.

To Israel and the media mob that covered the story, the fact that Grass, as a 17-year-old soldier entered the SS, rules him ineligible to criticize Israel.

The Time and Newsweek stories followed the script by omitting the central point of  This Must Be Said, the fact that a prominent German author chose to risk his public reputation by writing and publishing a poem that reveals in public, that which is not to be said.

Israel has built a nuclear arsenal that contains between 200 and 400 deliverable nuclear bombs.

This arsenal was developed in secret with no outside inspection, exactly the same inspection the West is demanding Iran allow as it develops its own power-oriented nuclear program.

That was obviously the big news out of the Grass poem. Instead the media mob focused on whether or not Grass had written a “good poem” (over night, journalists have become art critics?), or whether Grass had, like many young men of his generation, served in an SS unit.

The lead to the Grass story is the fact, which news reports and analysis still refused to acknowledge, namely, the revelation by a prominent German artist, that Israel has conspired with the rest of the world to hide the fact that it is a major nuclear threat to world peace.

At the moment, US public opinion is still far behind  the rest of the western world, though elites–those who run and shape media, politics, and religion– in the US and elsewhere, remain largely under the spell of Zionism.

Ambassador Oren’s job in Washington is not as difficult as the task facing Israel’s European ambassadors who must explain Israel’s conduct to a growing dubious public.

Nicholas Kulish began his New York Times analysis with this description of the growing division between elites and the general German public.

To judge by the outpouring of comments from politicians and writers and from the newspaper and magazine articles in response to the Nobel laureate Günter Grass’s poem criticizing Israel’s aggressive posture toward Iran, it would appear that the public had resoundingly rejected his work.

But even a quick dip into the comments left by readers on various Web sites reveals quite another reality.

Mr. Grass has struck a nerve with the broader public, articulating frustrations with Israel here in Germany that are frequently expressed in private but rarely in public, where the discourse is checked by the lingering presence of the past.

What might have remained at the family dinner table or the local bar a generation ago is today on full display, not only in Mr. Grass’s poem, but on Web forums and in Facebook groups.

The US public is stirring, but remains largely indifferent to the conduct of Israel.  That inattention makes it easier for Prime Minister Netanyahu to take advantage of the fact that US public attention is currently diverted to the presidential campaign.

Taking advantage of the diversion, Netanyahu is doing what he always does. He steps up his settlement program in the West Bank.

Israeli Prime Minister Benjamin Netanyahu is moving to expand Israeli settlements in the West Bank at a time when international attention is focused elsewhere, with President Obama gearing up for reelection and the West targeting Iran’s nuclear program.

Last week, the Netanyahu government took a variety of steps that, taken together, amount to a significant strengthening of Israel’s hold in the West Bank, the biblically resonant territory occupied in 1967, which Palestinians claim as the heartland for their future state.

For Netanyahu, who heads a right-wing coalition with a strong pro-settler contingent, it was a delicate dance of one small step back and six larger steps forward for settlements.

Facts on the ground are always easier to establish as permanent realities while the media and its constituents are looking the other way.

The  picture of Ambassador Oren is by Brendan Smialowski for The New York Times.

The picture from Berlin shows a German citizen announcing his belief that “Grass hat recht (Grass is right)” It is by Boris Roessler/DPA, via Agence France-Presse – Getty Image.

The still picture of Bogart and Rains is from the film, Casablanca.

From 1972 through 1999, James M. Wall was editor and publisher of the Christian Century magazine, based in Chicago, lllinois. He was a Contributing Editor of the Century from 1999 until July, 2017. He has written this blog, wall writings.me, since it was launched April 27, 2008. If you would like to receive Wall Writings alerts when new postings are added to this site, send a note, saying, Please Add Me, to jameswall8@gmail.com Biography: Journalism was Jim's undergraduate college major at Emory University, Atlanta, Georgia. He has earned two MA degrees, one from Emory, and one from the University of Chicago, both in religion. He is an ordained United Methodist clergy person. He served for two years in the US Air Force, and three additional years in the USAF reserve. While serving on active duty with the Alaskan Command, he reached the rank of first lieutenant. He has worked as a sports writer for both the Atlanta Journal and Constitution, was editor of the United Methodist magazine, Christian Advocate for ten years, and editor and publisher of the Christian Century magazine for 27 years.
View all posts by wallwritings →
This entry was posted in Media, Middle East Politics, Movies, Netanyahu, Politics and Elections. Bookmark the permalink.

10 Responses to Does Israel Interfere in US Elections?