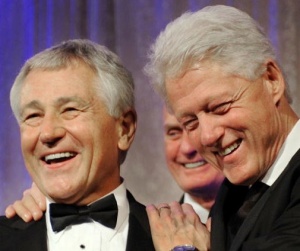 The Washington Post wrote in a lead editorial, December 18, that President Obama should not nominate former Nebraska Senator Chuck Hagel as his Defense Secretary because the President “has available other possible nominees who are considerably closer to the mainstream and to the president’s first-term policies.”

“Considerably closer to the mainstream” is not a good thing if the mainstream (including the Washington Post) led us to endless, pointless, fruitless occupations and wars that have deeply wounded American credibility and credit, as well as costing up to a hundred thousand innocent lives. We need less mainstream thought in Washington, not more.

The Post editorial reads like a set of instructions to a pro-Israel media/political hit squad on how to block Hagel as Obama’s nominee for Defense Secretary.

Is Hagel doomed to suffer the Charles Freeman treatment? Freeman, an experienced diplomat, had displayed the same independence from Zionist pressure that Chuck Hagel has shown.

When Freeman was initially chosen by the new Obama administration in 2009 to serve as Chairman of the National Intelligence Council (NIC), the neocons swung into action. Politicians and media voices painted Freeman, unfairly, as a danger to Israel.

The White House did little to rally support for Freeman, who soon agreed to withdraw his name, though not without some strong words about the machinations of the Israel Lobby.  When Barack Obama hit his first term neocon stone wall, he capitulated.

In a new essay for Consortium News, Freeman recalls his earlier experience, noting that:

The tactics of the Israel Lobby plumb the depths of dishonor and indecency and include character assassination, selective misquotation, the willful distortion of the record, the fabrication of falsehoods, and an utter disregard for the truth.

Today, a second term awaits Obama. Once again the White House has floated a name that was bound to arouse opposition from the neocons.  What will Obama do this time?  Thus far, the White House appears to have left Hagel to the mercy of his opponents. Unlike Freeman, however, Hagel has begun to hear sounds of support, with the widely read Andrew Sullivan leading a growing media/political support effort for Hagel. Is some of this support generated behind the scenes from the White House? Possibly.

“Mr. Hagel is a man of unshakable integrity and wisdom who has served his country in the most distinguished manner in peace and war. He is a rare example of a public servant willing to rise above partisan politics to advance the interests of the United States and its friends and allies.”

Note the bipartisan cast. These people held the top White House national security post in, respectively, the Obama, George H.W. Bush, Carter, and Reagan administrations. And they’re not alone. Hagel has also been endorsed by a slew of former U.S. ambassadors, from both Democratic and Republican administrations, including no fewer than five who have served as ambassador to Israel.

A week after Sullivan’s column on behalf of Hagel, and to the surprise of many, Thomas Friedman let it be known that a Hagel nomination would be in Israel’s best interest, always the bottom-line measure Friedman applies.

Friedman’s December 26 New York Times column sent word to Israel’s many friends in the U.S. that Friedman has their back.  More importantly, he has Chuck Hagel’s back:

I am a Hagel supporter. I think he would make a fine secretary of defense — precisely because some of his views are not “mainstream.” I find the opposition to him falling into two baskets: the disgusting and the philosophical. It is vital to look at both to appreciate why Hagel would be a good fit for Defense at this time.

The disgusting is the fact that because Hagel once described the Israel lobby as the “Jewish lobby” (it also contains some Christians). And because he has rather bluntly stated that his job as a U.S. senator was not to take orders from the Israel lobby but to advance U.S. interests, he is smeared as an Israel-hater at best and an anti-Semite at worst.

If ever Israel needed a U.S. defense secretary who was committed to Israel’s survival, as Hagel has repeatedly stated — but who was convinced that ensuring that survival didn’t mean having America go along with Israel’s self-destructive drift into settling the West Bank and obviating a two-state solution — it is now.

When someone of the stature of Tom Friedman rejects conventional mainstream wisdom,  it is hard not to recall the famous Walter Cronkite-Lyndon Johnson moment when a media icon spoke truth to the powerful.

That moment took place  on February 27, 1968, after CBS newsman Walter Cronkite’s first visit to Vietnam. Cronkite’s concluding editorial comment that night, in which he declared that the war was futile, is supposed to have led President Lyndon Johnson to declare, “If I’ve lost Cronkite, I’ve lost Middle America”.

Johnson’s exact words, or when he actually heard Cronkite (shown here), have been debated, but the historic fact remains that Johnson soon announced to the nation that he would not run for reelection.

Will Friedman’s column supporting Hagel have a Cronkite-like impact on President Obama’s decision on his next defense secretary?  We will most likely have to wait for a post-second term memoir for an answer to that question.

There is also no indication that former President Bill Clinton has spoken to President Obama about Hagel.  What is known is that Clinton is fully aware of Hagel’s service in the Vietnam War, in the U.S. Senate and now, after he left the Senate, as president of the Atlantic Council.

In the picture at top, Senator Hagel (left) is shown in good spirits after Hagel presented the former president with the Atlantic Council’s Distinguished International Leadership Award on April 28, 2010.

Shards from a Viet Cong mine are still embedded in Chuck Hagel’s chest, 44 years after his infantry squad walked into a booby trap in the Vietnam jungle. Scar tissue marks the left side of his face from another mine explosion, barely a month after his first brush with death.

“I remember,” Hagel told an interviewer for the Library of Congress’s Veterans History Project in 2002, “thinking to myself, you know, if I ever get out of all of this, I am going to do everything I can to assure that war is the last resort that we, a nation, a people, calls upon to settle a dispute. The horror of it, the pain of it, the suffering of it. People just don’t understand it unless they’ve been through it.”

Today, Hagel, 66, heads President Obama’s shortlist of candidates to lead the Pentagon. If he is nominated by the White House and confirmed by the Senate, he would become the first defense secretary with a Purple Heart, the combat decoration for those wounded in battle, since Elliot L. Richardson, who held the job briefly during the Nixon administration.

In his column for the Daily Beast, Andrew Sullivan has strong words for what he calls the “agitators” who have attempted to smear Hagel as anti-Semetic:

But that is not what these agitators have done. They have merely smeared Hagel already as an anti-Semite; they have described him as “having anti-Israel, pro-appeasement-of-Iran bona fides” or, in an echo of the WaPo, “out-of-the-mainstream” views.

Why? Because he is not a neoconservative who backs the permanent annexation of the West Bank, because he sees containment as an option for dealing with Iran, and wants to see if the U.S. can develop stronger ties throughout the region, rather than having one alliance destroy the ability of the US to retain any others. He is willing to talk to enemies, like Hamas, when there is no feasible, pragmatic way forward without their engagement.

Hagel has also drawn strong support from former Israeli New York consul general Alon Pinkas, who writes in Al Monitor, that the attacks on Hagel as “anti-Israel” are unfounded and do not serve the US-Israel relationship. He continues:

Even by the ugly and depressing standards of Washington’s [un]civility and character assassination as a beltway hobby, the recent attacks on former Senator Chuck Hagel seem venomous and iniquitous.  .  .  .

It is fine, acceptable and necessary to conduct a debate on past and present positions and policy preferences of a candidate to be Secretary of Defense. It is, however, quite another thing to tag, brand, defame and distort his record.

It is even worse to do what some, hiding behind the anonymity of “Concerned Jewish Leaders” or “The Pro-Israel Community,” have done: labeling Hagel as Anti-Israeli, and then stepping it up, almost casually, as an Anti-Semite. Chuck Hagel is neither: He is not anti-Israeli and he is not an anti-Semite.

If we don’t want to spend the next four years under the jackboot of the neocons, then we have to stop the neocons from blocking the nomination of diplomacy advocate, war skeptic and decorated Vietnam combat veteran Chuck Hagel. .  .  .

If President Obama does not want “to spend the next four years under the jackboot of the neocons”, he should listen to Tom Friedman, Andrew Sullivan, and those four former national security advisers, and nominate Chuck Hagel as his second-term Defense Secretary.

The picture at top, from the Daily Beast, is by Leslie E. Kossoff/AFP/Getty Images.

From 1972 through 1999, James M. Wall was editor and publisher of the Christian Century magazine, based in Chicago, lllinois. He was a Contributing Editor of the Century from 1999 until July, 2017. He has written this blog, wall writings.me, since it was launched April 27, 2008. If you would like to receive Wall Writings alerts when new postings are added to this site, send a note, saying, Please Add Me, to jameswall8@gmail.com Biography: Journalism was Jim's undergraduate college major at Emory University, Atlanta, Georgia. He has earned two MA degrees, one from Emory, and one from the University of Chicago, both in religion. He is an ordained United Methodist clergy person. He served for two years in the US Air Force, and three additional years in the USAF reserve. While serving on active duty with the Alaskan Command, he reached the rank of first lieutenant. He has worked as a sports writer for both the Atlanta Journal and Constitution, was editor of the United Methodist magazine, Christian Advocate for ten years, and editor and publisher of the Christian Century magazine for 27 years.
View all posts by wallwritings →
This entry was posted in Media, Middle East Politics, Politics and Elections and tagged high dudgeon, Middle East, national intelligence council, politics, senator chuck hagel. Bookmark the permalink.