Take It to the Bank, Hagel Will Win 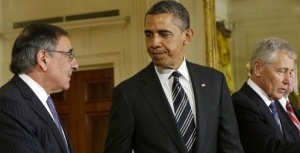 The war against Chuck Hagel followed a predictable pattern. It will end soon when the U.S. Senate votes to confirm Hagel as President Barack Obama’s next defense secretary.

Led by its media and political “myrmidons”  (myrmidon: A faithful follower who carries out orders unquestioningly) the Lobby’s plan followed the usual pattern:

Strike early, suggest a safer nominee, provide liberals with political cover, and then, to whip up emotions from the dark side, play the anti-Semitic card.

Obama made the nomination at the White House on Monday, January 7, where he is shown above with outgoing Defense Secretary Leon Panetta, left and Hagel, right.

In spite of the attacks the Lobby began against Hagel in mid-December, it failed to block the nomination. What led to this Obama victory?

Take notes because it is a predictable pattern (remember Chas Freeman) and it will, no doubt, be repeated the next time the Israel Lobby giant senses “danger”.

The “block Hagel” war was officially launched December 18, 2012, when the Washington Post  editorialized that President Obama should not nominate former Nebraska Senator Chuck Hagel as his defense secretary because the President ” has available other possible nominees who are considerably closer to the mainstream and to the president’s first-term policies.”

Got that, Politics 101 students?  To block a nominee before she/he is named, accuse the possible nominee of being”out of the mainstream”.  Then, in the same opening salvo, bring in a safer, more desirable choice.

The Post offered its “consensus” candidate, Michele Flournoy, a former undersecretary of defense, who was described by the Post as “a seasoned policymaker who understands how to manage the Pentagon bureaucracy and where responsible cuts can be made.”

The vote on Hagel, as with other new cabinet appointments, will go first to a Senate committee. (You can tell your Uncle Charlie that the Republican-controlled House of Representatives has no say in these matters.  Sorry, Charlie.)

When the nomination of Hagel reaches the Senate floor, a debate will proceed and a vote taken among 53 Democrats, two Independents (both of whom caucus with the Democrats), and 45 Republicans.

What will drive the debate?

Fred Kaplan writes that opponents of Hagel have ” four main concerns” in their disapproval of Hagel.

The first three of their concerns, that he will cut the military budget, “roll over” and let Iran build a nuclear weapon, and be “reluctant” to use military force, are quickly refuted by Kaplan.

The major reason the Lobby has been pushing this war, of course, is Israel, “the third rail” in foreign policy. Kaplan sums up the case the Lobby made against Hagel.

As a senator, Hagel once complained to a reporter that “the Jewish lobby” intimidates many lawmakers on Capitol Hill. And he once intoned that he was a senator from Nebraska, not a senator from Israel. These may have been impolitic remarks, but they weren’t false – either in strict substance or in spirit.

No one could deny that AIPAC has an overpowering influence on many lawmakers. Hagel’s sin, in the eyes of some, was to call it the “Jewish lobby” instead of the “Israel lobby.” If this is a sin, AIPAC and its allies have brought it on themselves. For decades, they have thundered that criticism of Israel is thinly disguised anti-Semitism.

MJ Rosenberg, who writes that “I worked at AIPAC for four years and in Congress for 20”, sees the outcome of the war against Hagel from the perspective of one who “knows how the game is played”.  He predicts that AIPAC, his old organization, will signal to the anti-Hagel forces that the war is over, so stand down. Rosenberg writes:

AIPAC will claim it was not involved in the effort to prevent Hagel’s nomination. That is a lie. AIPAC never operates in the open. It uses cutouts in Congress, the media and smaller fringy organizations like the Republican Jewish Coalition and the Emergency Committee For Israel to do the dirty work so it can keep its hands cleans.

Anyone who thinks that Commentary, the American Jewish Committee, the Free Beacon, the “pro-Israel” bloggers, pundits and Alan Dershowitz do not get their marching orders from AIPAC is living in a dream world.

When Hagel’s name was floated, New York’s Democratic Senator Charles Schumer said  he would wait and see how the debate proceeded.  The possibility of a party leader of the stature of Schumer going against President Obama is quite unlikely, especially after New York Times columnists Nicholas D. Kristof, Thomas Friedman and Roger Cohen, wrote their pro-Hagel columns.

Critics are pounding President Obama’s choice for defense secretary, Chuck Hagel, as soft on Iran, anti-military and even anti-Semitic. This is a grotesque caricature of a man who would make a terrific defense secretary.

It’s true that Hagel harbors a healthy skepticism about deploying American troops. That’s because he also harbors shrapnel in his chest from Vietnam and appreciates the human costs when Pentagon officials move pins on maps.

In Vietnam, Hagel rescued his unconscious brother (who served in the same unit) from a troop carrier that had hit a mine. The incident left Hagel with blown eardrums, bad burns and an important take-away.

“I’m not a pacifist. I believe in using force, but only after a very careful decision-making process,” Hagel later told Vietnam magazine.

Roger Cohen sees the choice of Hagel as an essential moment in provoking a needed debate:

Obama’s decision to nominate Chuck Hagel, a maverick Republican with enough experience of war to loathe it, as his next secretary of defense is the right choice for many reasons, chief among them that it will provoke a serious debate on what constitutes real friendship toward Israel.

That debate, which will unfold during Senate confirmation hearings, is much needed because Jewish leadership in the United States is often unrepresentative of the many American Jews who have moved on from the view that the only legitimate support of Israel is unquestioning support of Israel, and the only mark of friendship is uncritical embrace of a friend.

Friedman wrote a recent column, “Give Chuck a Chance” that included this declaration:

I am a Hagel supporter. I think he would make a fine secretary of defense — precisely because some of his views are not “mainstream.

Will Republicans uniformly oppose a former member of their own caucus when the issues at stake are complaints that look comical when held up to the light of day? One who was one of the top foreign policy Republicans in the Senate? I doubt it.

Will Democratic senators deny a reelected President Obama his choice for one of the top four cabinet positions when he is quite popular and the expansion of their caucus is due in significant measure to his popularity? Please. Chuck Schumer will oppose the President? Not likely.

A final word on Hagel comes from long-time Israeli anti-war activist Uri Avnery, who writes in support of Hagel from a shared view drawn from actual war experiences.

I find Chuck Hagel eminently likeable. I am not quite certain why.

Perhaps it is his war record. He was decorated for valor in the Vietnam War (which I detested). He was a mere sergeant. Since I was a mere corporal in our 1948 war, I find it elating to see a non-commissioned officer become Minister of Defense.

Like so many veterans who have seen war from close up (myself included), he has become an enemy of war. Wonderful.

Now Hagel is violently attacked by all the neocon warmongers, almost none of whom has ever heard a bullet whistle in the wars to which they sent others, and the combined political regiments of the American Jewish establishment.

His main sin seems to be that he objects to war against Iran. To be against an attack on Iran means to be anti-Israeli, anti-Semitic, indeed to wish for the destruction of Israel if not all Jews. Never mind that almost all present and past chiefs of the Israeli army and intelligence community object to an attack on Iran, too.

Hagel will be confirmed.  You may take it to the bank.

From 1972 through 1999, James M. Wall was editor and publisher of the Christian Century magazine, based in Chicago, lllinois. He was a Contributing Editor of the Century from 1999 until July, 2017. He has written this blog, wall writings.me, since it was launched April 27, 2008. If you would like to receive Wall Writings alerts when new postings are added to this site, send a note, saying, Please Add Me, to jameswall8@gmail.com Biography: Journalism was Jim's undergraduate college major at Emory University, Atlanta, Georgia. He has earned two MA degrees, one from Emory, and one from the University of Chicago, both in religion. He is an ordained United Methodist clergy person. He served for two years in the US Air Force, and three additional years in the USAF reserve. While serving on active duty with the Alaskan Command, he reached the rank of first lieutenant. He has worked as a sports writer for both the Atlanta Journal and Constitution, was editor of the United Methodist magazine, Christian Advocate for ten years, and editor and publisher of the Christian Century magazine for 27 years.
View all posts by wallwritings →
This entry was posted in Media, Middle East Politics, Politics and Elections. Bookmark the permalink.

10 Responses to Take It to the Bank, Hagel Will Win