Khalidi to Obama: Time For a New Course 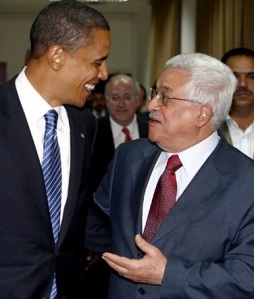 The New York Times performed a valuable service for its readers on Wednesday, March 13, exactly one week before President Obama is scheduled to arrive on his first-ever presidential visit to Palestine and Israel.

The Times contrasted the major media voice of  the liberal Zionism of the American ruling classes, with that of the voice of a champion for the Palestinian people.

Which of these voices do your leaders, political, media, or religious. respond to?  As President Obama prepares to fly to Tel Aviv, this would be a good time to visit, write or call those leaders and ask them.

In his column, Friedman reiterated liberal Zionism’s formulaic belief that the Middle East must be made over entirely in an empirical US/Israel image.

After all, you have a huge interest in trying to midwife a decent West Bank Palestinian state that is modern, multireligious and pro-Western — a totally different model from the Muslim Brotherhood variants around you.

Who defines “decent”?  And who determines if Israel qualifies as “multireligious”? The answer is, Thomas Friedman, the media maven of US liberal Zionism. (Wikipedia: “maven comes from Hebrew, via Yiddish, and means one who understands, based on an accumulation of knowledge.”)

Khalidi has his own abundance of “accumulated knowledge”, far more than enough to serve as a Palestinian maven for his old friend now in the White House. Khalidi is currently a professor of modern Arab studies at New York’s Columbia University. His latest book is Brokers of Deceit: How the U.S. Has Undermined Peace in the Middle East.

Khalidi begins his Times column with a question:

What should Barack Obama .  .  .   do about the Israeli-Palestinian conflict?

First, he must abandon the stale conventional wisdom offered by the New York-Washington foreign-policy establishment, which clings to the crumbling remnants of a so-called peace process that, in the 34 years since the Camp David accords, has actually helped make peace less attainable than ever.

The President traveled to Israel as a candidate in 2008. The picture of Obama and President Mammoud Abbas (above) was taken on that trip,

It was Obama’s second de rigueur trip to Israel, both taken for mandatory political purposes. His first presidential trip will set the tone for his entire second term foreign policy.

It is a far more serious journey this time because he is facing an international growing sense of outrage over Israel’s occupation, and its refusal to change course.

The text from the press conference call continues:

In Ramallah, he will have a bilateral meeting with President Abbas of the Palestinian Authority. And then the two leaders will have a press conference and then they’ll have a working lunch together.

Again, the United States has supported the significant institution-building that the Palestinian Authority has undertaken in the West Bank. It’s a chance to discuss our continued support for the PA, as well as to discuss ways to advance Israeli-Palestinian peace going forward.

Following the working lunch, the President will join Prime Minister Fayyad at the Al-Bireh Youth Center, also in Ramallah.

Again, this is an opportunity for the President to see firsthand some of the work that’s being done to develop institutions on the West Bank, and also to meet with a range of Palestinian young people and hear directly from them as well. So that will complete that portion of his time in Ramallah.

The President will return to Israel Thursday afternoon to deliver a speech at the Jerusalem International Convention Center, followed by a dinner in his honor hosted by Israeli President Peres.

Friday’s schedule will begin with ceremonial stops at special Israeli locations, which will involve the laying of wreaths in honor of two major Israeli historical figures. Events in Israel and Palestine will conclude in Bethlehem, in the West Bank, where the President will visit the Church of the Nativity.

These are details for the Friday, March 21, schedule, which were released during the press conference:

On Friday, the President will begin his day by going to Mt. Herzl, where he will lay a wreath at both the graves of  [Theodor] Herzl and [Yitzhak] Rabin, speaking, of course, to the significant contributions that both of those huge figures in Israeli history and Jewish history — to their contribution.

Following those wreath-layings, he will visit Yad Vashem and tour Yad Vashem, and have a chance to lay a wreath and make remarks there, of course, marking the very somber and powerful history of the Holocaust. The President was able to travel there previously in 2008 as a senator and was very deeply moved by that experience, and it’s an important opportunity to once again mark that particular tragic element of our shared history.

Following the visit to Yad Vashem, the President will travel to Bethlehem where he will tour the Church of the Nativity.

Of great symbolic significance is the fact that there is no word in the schedule that would suggest a wreath being placed at the tomb of Palestinian leader Yasir Arafat, while Obama is in Ramallah. No wreath and no parallel reference to the schedule’s description of the  Israeli leaders, “speaking, of course, to the significant contributions”.

Note to trip-planners: There are two “sides” here, and “significant contributions” were made on both sides.

If the meeting with President Abbas is in his headquarters, Obama will pass by the Arafat burial site, to his left, on his way into the building. Of course, it is also possible that the Obama-Abbas meeting will be held at a different location.

We will find out next week how this slighting of Arafat, in contrast to the honoring of Israeli historic figures, will be received on the Palestinian street.

One thing is certain, Israel cannot hide the sight of the wall that the President will experience when he travels to Bethlehem. Indeed, the wall will be a constant part of the landscape as the President’s party moves back and forth between the West Bank and Israel.

Which brings us around to the fact that the now-retired Benedict XVI made a 2009 papal visit to Bethlehem. Following the elevation of a new Catholic leader, Pope Francis, which has been much in the news, this is a good time to recall that when Benedict XVI visited Bethlehem, he was photographed standing in front of a wall with graffiti behind him, illustrating how locals feel about the the occupation wall.

The Guardian’s May 13, 2009 story, should be studied by President Obama’s trip planners.

Pope Benedict XVI (right) held his hands out wide to greet a crowd of applauding Palestinian refugees in the afternoon sun. Behind him stood the most striking symbol of Israel’s occupation: a paint-spattered military watchtower rising above the tall, concrete wall that presses on Bethlehem.

All around him were paintings, posters and graffiti proclaiming the Palestinian cause and their hopes from their papal visitor. From an apartment block to his left hung a poster in English and Italian: “We need bridges not walls.”

On a balcony beneath, a Palestinian couple sat with their children, looking down as the pope waved back to them.

Today the pope made his strongest call yet for a “sovereign Palestinian homeland”. He said mass in Bethlehem’s Manger Square and offered his “solidarity” to the Palestinians of Gaza, telling them he wanted to see the Israeli blockade of the coastal strip lifted.

Later, he was driven in to the UN school in the Aida refugee camp on the edge of Bethlehem, home to refugees who in 1948 were forced out or fled their homes in what is now Israel.

What has happened to the birthplace of the Christ child is one of the reasons Rashid Khalidi used his New York Times column to remind President Obama that his administration continues a US policy which since 1993 has failed to prevent Israel, as Khalidi puts it, “from gradually gobbling up the very land the two-state solution was to be based on”.

Furthermore,  Khalidi writes, the number of Israel settlers living in illegally occupied land, has steadily increased under four successive presidents, growing from 200,000 in 1993 to almost half a million today.

Toward the end of his first term, Mr. Obama essentially abandoned his already modest peacemaking agenda in exchange for a lull in Prime Minister Benjamin Netanyahu’s campaign for war with Iran. Palestine was again sacrificed, this time to bribe a belligerent Israel for temporary good behavior.

The American-led “process” has ultimately strengthened the Israeli far right and made Palestinian self-determination more unattainable than ever. Continuing with the Orwellian grotesquerie that is the “peace process” is contrary to any enlightened definition of American self-interest. . .

Khalidi concludes with this strong admonition to his friend:

For Mr. Obama, a decision is in order. He can reconcile the United States to continuing to uphold and bankroll an unjust status quo that it helped produce. Or he can begin to chart a new course based on recognition that the United States must forthrightly oppose the occupation and the settlements and support an inalienable Palestinian right to freedom, equality and statehood. There is no middle way.

It would be too much to expect President Obama to echo Ronald Reagan’s Berlin Wall speech with a passionate Bethlehem speech that would demand, “Mr. Netanyahu, tear down this wall”.

But it is not too much to expect Obama to inform Benjamin Netanyahu, who has just barely assembled his new government in time for this visit, that the United States government will now change to a new course in its dealings with Israel’s occupation.

Anything less would be a serious setback to the hopes of both Palestinians and peace-loving Israelis.

(Updated, since its initial posting.)

The 2008 picture (at top) of Candidate Obama and President Abbas was taken by Omar Rashid, for the European Pressphoto Agency. The 2009 picture of Pope Benedict was taken by Peter Damman for AFP/Getty Images.

From 1972 through 1999, James M. Wall was editor and publisher of the Christian Century magazine, based in Chicago, lllinois. He was a Contributing Editor of the Century from 1999 until July, 2017. He has written this blog, wall writings.me, since it was launched April 27, 2008. If you would like to receive Wall Writings alerts when new postings are added to this site, send a note, saying, Please Add Me, to jameswall8@gmail.com Biography: Journalism was Jim's undergraduate college major at Emory University, Atlanta, Georgia. He has earned two MA degrees, one from Emory, and one from the University of Chicago, both in religion. He is an ordained United Methodist clergy person. He served for two years in the US Air Force, and three additional years in the USAF reserve. While serving on active duty with the Alaskan Command, he reached the rank of first lieutenant. He has worked as a sports writer for both the Atlanta Journal and Constitution, was editor of the United Methodist magazine, Christian Advocate for ten years, and editor and publisher of the Christian Century magazine for 27 years.
View all posts by wallwritings →
This entry was posted in Middle East Politics, Netanyahu, Obama. Bookmark the permalink.

18 Responses to Khalidi to Obama: Time For a New Course