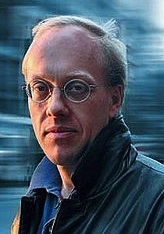 Prior to the start of the Iraq War on March 19, 2003, New York Times journalist Chris Hedges (right) occupied a lonely perch among major media journalists. He opposed the war.

Today, Hedges, a Pulitzer Prize winner and now a columnist for the website Truthdig, continues to write with the passion of a man set free from corporate control.

His latest posting is a perceptive analysis of both the role this nation’s political and media “liberal hawks” played in launching the Iraq war, and the “rewriting of history” by those “liberal hawks” on the 10th anniversary of the start of that war.

In his Truthdig column, “The Treason of the Intellectuals“, Hedges asks, how did the liberal Iraq war boosters react to the tenth anniversary of the war they initially supported?

Some claimed they had opposed the war when they had not. Others . . . argued that they had merely acted in good faith on the information available; if they had known then what they know now, they assured us, they would have acted differently. This, of course, is false.

[They] did what they always have done: Engage in acts of self-preservation. To oppose the war would have been a career killer. And they knew it. .  .  .

Those of us who spoke out against the war, faced with the onslaught of right-wing “patriots” and their liberal apologists, became pariahs.

The liberal class fueled a rabid, irrational hatred of all war critics. Many of us received death threats and lost our jobs, for me one at The New York Times. These liberal warmongers, 10 years later, remain both clueless about their moral bankruptcy and cloyingly sanctimonious. They have the blood of hundreds of thousands of innocents on their hands.

They know what they need to say. They know which ideology they have to serve. They know what lies must be told—the biggest being that they take moral stances on issues that aren’t safe and anodyne. They have been at this game a long time. And they will, should their careers require it, happily sell us out again.

Despite their support for a war that proved to be a disastrous mistake, the academics, writers and journalists listed above—with the exception of Hitchens— have retained their positions as major commentators. Two of the political war boosters, Senators Clinton and Kerry, were later elevated to cabinet positions in the Obama administration.

A decade later, these liberal war enablers, their careers unhindered, remain leaders within the same liberal class that endorsed the Iraq war.  This means, of course, that they continue to promote the same dominant Israeli Middle East narrative of the nation’s liberal ruling class.

The liberal class, in fact, is used to marginalize and discredit those, such as Noam Chomsky and Norman Finkelstein, who have the honesty, integrity and courage to denounce Israeli war crimes. And the liberal class is compensated for its dirty role in squelching debate.

Hedges finds a valuable supporter in his research on the failures of the liberal ruling class in the work of the late Palestinian author and scholar, Edward Said,

Saïd, who died at age 68 on September 25, 2003, six months after the start of the Iraq War, was a Palestinian–American literary theoretician who was an advocate for the political and the human rights of the Palestinian people.

British journalist Robert Fisk described Said as “the most powerful voice for the Palestinian people”. Said was the University Professor of English and Comparative Literature at Columbia University, and a public intellectual who was a founding figure of the critical-theory field of Post-colonialism.

Born a Palestinian Arab in the Jerusalem city of Mandatory Palestine in 1935, Said (left) was an American citizen through his American father, Wadir Saïd. (Source: Wikipedia)

Hedges searched for appropriate quotations on the liberal class avoiding social issues. He found one in the penultimate of the four British Reith Lecture series : Speaking Truth to Power, which Said delivered in July and August of 1993. The lectures were broadcast by the BBC. They have since been archived on the internet.

The Said passages Hedges includes in his Truthdig essay, offer a powerful indictment of intellectuals from any profession or area of responsibility who manage to find reasons to avoid disagreeing with the prevailing accepted narrative. Said writes:

“Nothing in my view is more reprehensible than those habits of mind in the intellectual that induce avoidance, that characteristic turning away from a difficult and principled position, which you know to be the right one, but which you decide not to take.”

Said adds a list of self-serving excuses he found within all segments of the intellectual community:

You do not want to appear too political; you are afraid of seeming controversial; you want to keep a reputation for being balanced, objective, moderate; your hope is to be asked back, to consult, to be on a board or prestigious committee, and so to remain within the responsible mainstream; someday you hope to get an honorary degree, a big prize, perhaps even an ambassadorship.

For an intellectual these habits of mind are corrupting par excellence. If anything can denature, neutralize, and finally kill a passionate intellectual life it is the internalization of such habits.

Personally I have encountered [these habits] in one of the toughest of all contemporary issues, Palestine, where fear of speaking out about one of the greatest injustices in modern history has hobbled, blinkered, muzzled many who know the truth and are in a position to serve it.

For despite the abuse and vilification that any outspoken supporter of Palestinian rights and self-determination earns for him or herself, the truth deserves to be spoken, represented by an unafraid and compassionate intellectual.

Chris Hedges and Edward Said have traveled different paths to reach their shared passion regarding Palestine.

Hedges, 56,  is the son of an American Presbyterian minister. He  holds  a B.A. in English Literature at Colgate University. He later earned a Master of Divinity from Harvard Divinity School, where he studied under James Luther Adams.

Hedges is the author of Death of the Liberal Class,  The World As It Is: Dispatches on the Myth of Human Progress, and War is the Force that Gives Life Meaning. His 2012 best seller, written with the cartoonist Joe Sacco, is Days of Destruction, Days of Revolt.

An early critic of the Iraq War, Hedges delivered a 2003 commencement address at Rockford College in Rockford, Illinois, in which he said: “We are embarking on an occupation that, if history is any guide, will be as damaging to our souls as it will be to our prestige and power and security.”

The New York Times, for which he then worked, criticized his statements and issued him a formal reprimand for “public remarks that could undermine public trust in the paper’s impartiality.”

After receiving the reprimand, Hedges left the paper. He is currently a senior fellow at The Nation Institute in New York City. At the Times, he worked for nearly two decades as a foreign correspondent in Central America, the Middle East, Africa and the Balkans.

Paul Craig Roberts includes Hedges in his list of “rebels” who speak the truth to power by exposing as false, elements of the prevailing public narrative. Roberts describes his list as “offensive” to defenders of the establishment’s status quo.

While Edward Said, unfortunately, is no longer with us, Chris Hedges continues his “offensive” fight against the “might makes right” ideology that led to the Iraq War. One of his recent media appearances is available in a nine-minute video interview from the Real News Network.

The interview was prompted by Hedges’ decision to withdraw from a PEN speaking engagement and then resign from PEN, an international writers organization that “works to advance literature, to defend free expression, and to foster international literary fellowship”. He explains his decision here and in this video interview:

The photo of Chris Hedges at top is from Wikipedia. The photo of Edward Said is from http://www.tumblr.com.

From 1972 through 1999, James M. Wall was editor and publisher of the Christian Century magazine, based in Chicago, lllinois. He was a Contributing Editor of the Century from 1999 until July, 2017. He has written this blog, wall writings.me, since it was launched April 27, 2008. If you would like to receive Wall Writings alerts when new postings are added to this site, send a note, saying, Please Add Me, to jameswall8@gmail.com Biography: Journalism was Jim's undergraduate college major at Emory University, Atlanta, Georgia. He has earned two MA degrees, one from Emory, and one from the University of Chicago, both in religion. He is an ordained United Methodist clergy person. He served for two years in the US Air Force, and three additional years in the USAF reserve. While serving on active duty with the Alaskan Command, he reached the rank of first lieutenant. He has worked as a sports writer for both the Atlanta Journal and Constitution, was editor of the United Methodist magazine, Christian Advocate for ten years, and editor and publisher of the Christian Century magazine for 27 years. James M Wall died March 22, 2021 at age 92. His family appreciates all of his readers, even those who may have disagreed with his well-informed writings.
View all posts by wallwritings →
This entry was posted in Hillary Clinton, Media, Middle East Politics. Bookmark the permalink.