Ten Years After US Invades Iraq, Israel Eager to Take the US Into Round Two 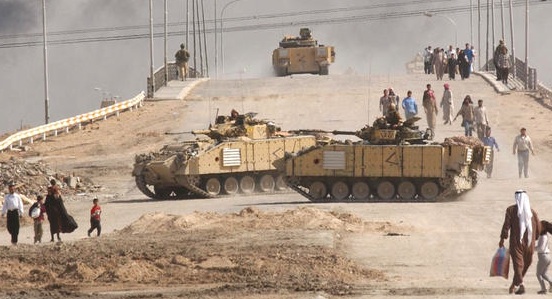 Ten years after the US invaded Iraq in 2003, another Middle East war looms large between the West and Muslim states.

Signs point to the strong possibility that Israel, and its US Zionist supporters, remain determined, first, to draw the US into the Syrian Civil War, and second, to lead Israel in a joint attack against Iran.

All from the skies, of course. Boots on the ground have not served well in the past, too visible, too costly in “our” lives lost.

At a cabinet meeting Sunday, Israeli Prime Minister Benjamin Netanyahu announced that Israel was prepared to attack Syria for the third time this month “to stop the transfer of advanced Fateh-110 missiles to the Lebanese terror group Hezbollah.”

Why not? He got away with it before, using the “self defense” righteous rationale that empires employ as they increase their power one step at a time. This is the way empires grow.  It is also the way they die, one pyrrhic victory after another.

Secretary of State John Kerry is doing his best to persuade Russia to help the US pull the Syria parties to peace talks before a civil war extends beyond its boundaries.

Prime Minister Netanyahu’s continued “defense” actions threatens another war between the West and Muslim states, ten years after the US invasion of Iraq on March 19, 2003.

The ostensible reason for that invasion was to eradicate Iraq’s non-existent WMDs. The American public was primed for the war.  The Bush-Cheney-Rumsfeld leadership team had whipped the American public into such a post-911 war fever that all normal reason and logic had been drained away.

In the picture  above, Iraqi citizens are walking around tanks on a bridge near the entrance to the besieged city of Basra. The picture was taken ten days after the war began. It was a time of great  uncertainty as Iraqis struggled to adjust to the presence of another foreign army on their soil.

These Iraqi citizens are caught in the middle of an empire’s over reach, a moment in time when the US, still reeling from the attacks of 9/11, goaded by its Israeli ally and its own domestic Zionist patriots, entered a war against  Iraq, a nation that had nothing to do with the horrors of 9/11.

The invasion was a classic example of an empire ignoring voices of morality, caution and reason, to once again send tanks moving across borders. Empires in decline have long reached numerous end points in their lust for power.
Instead of heeding warning signs, it is the nature of empires to ignore all warning signs. Instead, they travel one bridge too far and win one “pyrrhic victory” too many.
For the term “pyrrhic victory”–a victory that costs far more than it is worth–we are indebted to Greek King Pyrrhus of Epirus, whose army suffered irreplaceable casualties in a battle in which Pyrrhus’ forces defeated the Romans at Heracleain in 280 BC and at Asculum in 279 BC.

After the Asoulum battle, the historian Plutarch conveyed words and wisdom that live on:

“The armies separated; and, it is said, Pyrrhus replied to one that gave him joy of his victory that one more such victory would utterly undo him.”

When empires recognize they are losing too much in battles they win, it is past time to stand down.  Unfortunately, empires become blind to reality and instead of withdrawing from battle, they plunge further downward toward their own demise.

Patrick J. Buchanan and Eric S. Margolis, two intrepid columnists, found a warning from King Pyrrhus as they reflected on the tenth anniversary of the Iraq war . Their columns were linked together in the Washington Report. Read both columns here.

Here is how Buchanan ended his column on the tenth anniversary of the US invasion of Iraq:

What makes the question more than academic is that the tub-thumpers for war on Iraq a decade ago are now clamoring for war on Iran. Goal: Strip Iran of weapons of mass destruction all 16 U.S. intelligence agencies say Iran does not have and has no program to build.

This generation is eyewitness to how a Great Power declines and falls. And to borrow from old King Pyrrhus, one more such victory as Iraq, and we are undone.

John LeCarre’s recently published novel, A Delicate Truth, is a perceptive and clear-eyed presentation of the period before the US led Britain and a loose coalition into a war that strikes LeCarre as insane.

Early in A Delicate Truth, Second Secretary Toby Bell has arrived in Berlin on his first diplomatic assignment for Her Majesty’s government. Bell reaches Berlin in the weeks before the launching of the “shock and awe” assault against Iraq.

LeCarre’s novel captures the moment through Bell’s anger and frustration:

The neophyte diplomat [Toby] Bell, Second Secretary (Political), has just arrived at the British Embassy on his first overseas posting. The Iraq War looms. Britain has signed up to it, but denies it has done so. Germany is dithering on the brink. Giles Oakley, the embassy’s eminence grise – darting, impish Oakley, dyed in all the oceans, as the Germans say – is Toby’s section chief.

Oakley’s job, amid a myriad others less defined: to supervise the flow of British intelligence to German liaison, Tobys: to be his spear-carrier. His German is already good. As ever, he’s a fast learner. Oakley takes him under his wing, marches him round the ministries and opens doors for him that would otherwise have remained locked against one of his lowly status. Are Toby and Giles spies? Not at all! They are blue-chip British career diplomats who have found themselves, like many others, at the trading tables of the free world’s vast intelligence marketplace.

The only problem is that the further Toby is admitted into these inner councils, the greater his abhorrence of the war about to happen. He rates it illegal, immoral and doomed. His discomfort is compounded by the knowledge that even the most supine of his schoolfriends are out on the street protesting their outrage.

So are his parents who, in their Christian socialist decency, believe that the purpose of diplomacy should be to prevent war rather than to promote it. His mother emails him in despair: Tony Blair – once her idol – has betrayed us all. His father, adding his stern Methodist voice, accuses Bush and Blair jointly of the sin of pride and intends to compose a parable about a pair of peacocks who, bewitched by their own reflections, turn into vultures.

Little wonder then that with such voices dinning in his ear beside his own, Toby resents having to sing the war’s praises to, of all people, the Germans, even urging them to join the dance. He too voted heart and soul for Tony Blair, and now finds his prime minister’s public postures truthless and emetic. And With the launch of Operation Iraqi Freedom, he boils over.

Bell’s religiously-committed parents had it right: “The purpose of diplomacy should be to prevent war rather than to promote it.”

Israel produces and sells more drones than any other nation in the world, while the US has refused to give up the drone as its weapon of choice in fighting forces of “terror”.  With our use of drones, our nation’s use of coercion is sliding down a dangerously dark slope.

In Moral Man and Immoral Society theologian Reinhold Niebuhr was aware of the ambiguity of nations forced to employ coercion to preserve “the course of justice”. However, Niebuhr was quick to warn, “moral reason must learn how to make coercion its ally without running the risk of a Pyrrhic victory in which the ally exploits and negates the triumph”.

Coercion is a dangerous ally. It is also one we must keep under strict control. Moral reason demands no less. If we want to apply moral reason to our nation’s action, our leaders must be warned that war is always a sign of failure.

(The photo from Basra, Iraq, above. is by Spencer Platt/Getty Images) from the Denver Post.

From 1972 through 1999, James M. Wall was editor and publisher of the Christian Century magazine, based in Chicago, lllinois. He was a Contributing Editor of the Century from 1999 until July, 2017. He has written this blog, wall writings.me, since it was launched April 27, 2008. If you would like to receive Wall Writings alerts when new postings are added to this site, send a note, saying, Please Add Me, to jameswall8@gmail.com Biography: Journalism was Jim's undergraduate college major at Emory University, Atlanta, Georgia. He has earned two MA degrees, one from Emory, and one from the University of Chicago, both in religion. He is an ordained United Methodist clergy person. He served for two years in the US Air Force, and three additional years in the USAF reserve. While serving on active duty with the Alaskan Command, he reached the rank of first lieutenant. He has worked as a sports writer for both the Atlanta Journal and Constitution, was editor of the United Methodist magazine, Christian Advocate for ten years, and editor and publisher of the Christian Century magazine for 27 years.
View all posts by wallwritings →
This entry was posted in Middle East Politics, Netanyahu, War. Bookmark the permalink.

6 Responses to Ten Years After US Invades Iraq, Israel Eager to Take the US Into Round Two