If Talks Fail, Boycotts Will Arrive “On Steroids” 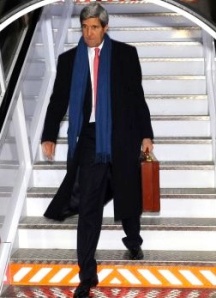 John Kerry returned for talks in Jerusalem and Ramallah this week, bringing a warning that if the peace talks fail, Israel could confront a “boycott campaign on steroids“.

The U.S. Secretary of State also brought a “framework agreement” for the two sides to discuss.

Learning of the contours of the proposed agreement, Palestinian President Mahmoud Abbas was quick to voice his  opposition.

The agreement reportedly calls for the stationing of Israeli military forces in the Jordan Valley under the noxious pretense that Israel needs that extra layer of protection for its security.

As reported in Ha’aretz, according to a senior Palestinian advisor, the atmosphere at the meeting last night was not good because of “American pressure.”

The Americans want an Israeli presence in the Jordan Valley for a period of 10 to 15 years.  The Palestinians have publicly stated that they would accept an international military presence in their future state, but would not agree to any Israeli military deployment on their territory.

On his return to Jerusalem from Ramallah, the Secretary had his expected 30 minute drive delayed for more than two hours. Such a delay would be typical for Palestinians on the same journey, but it was not checkpoints that delayed the Secretary.  He was driving through the heaviest snowstorm to hit Jerusalem in decades.

Kerry’s proposed “framework agreement” is described by Ha’aretz as “an attempt to achieve a breakthrough in the impasse and to force leaders to reach decisions”.

Kerry has five months left in his self-imposed time frame to reach a peace agreement. He is trying everything in his diplomat notebook. He warns Israel’s Benjamin Netanyahu of a flood of boycotts he could face. He warned Abbas of a delay in the scheduled release of Palestinian prisoners at the end of December.

The two threats are hardly comparable, but then, the status of the occupied and the occupier are also anything but comparable.

Kerry has since backed off the prisoner release delay, a wise move considering that the world’s most famous political prisoner, Nelson Mandela, has just been honored and buried in South Africa.

Kerry flew from Tel Aviv to Vietnam after his short visit to Ramallah and Jerusalem.  Before his departure, Ma’an reported that he told reporters:

“We are working on an approach that both guarantees Israel’s security and fully respects Palestinian sovereignty,”

Kerry also insisted his goal was for both sides “to reach a final status agreement — not an interim agreement.” He added that Israel will release as planned a new group of Palestinian prisoners on Dec. 29.

This is hardly a propitious time for Kerry and Netanyahu to bring more world attention to Palestinian political prisoners.  This is especially true after Israel failed to send a top-level leader to attend the Mandela memorial service.

The next group of prisoners to be released will most certainly not include the name of Marwan Barghouthi (at left), the man many Palestinians feel could become the Palestinian Nelson Mandela.

Following Mandela’s death, linkage of Barghouthi to Mandela takes on a new impetus. A long-time friend and fellow prisoner of Mandela’s, an Indian-born South African, Ahmed Kathrada, is stepping up his campaign to free Barghouthi.

Kathrada and Mandela were both released from a South African prison in 1990. In 1994 Mandela was inaugurated as South Africa’s first post-apartheid President.

Ahmed Kathrada, an anti-apartheid leader, initially launched a Release Mandela Campaign, a project that lead to his imprisonment a year later. He joined Mandela on Robben Island and then spent a total of  26 years in apartheid jails.

On October 27, this year, Kathrada returned to Robben Island to launch the International Campaign to “Free Marwan Barghouthi and All Palestinian Prisoners”.

Kathrada wrote of his experience in prison and of Marwan Barghouthi, in the Africa Report:

I think of my cramped prison cell and I visualise my fellow freedom fighter Marwan Barghouti and other Palestinian prisoners. Since 1967, over 800,000 Palestinians have endured imprisonment at some point in their lives.

This is a very striking example of mass detention, aimed at breaking the will of an entire people. Some of them have spent over 30 years in Israeli jails, setting shameful world records for the longest period of political detention. Others have lost their lives due to ill-treatment or lack of healthcare. Children in Palestine experience detention and apartheid, as several generations did in South Africa.

Anticipating the release of Palestinian prisoners later this month, the South African Kathrada wrote in Aljazeera:

Marwan Barghouti, a leading Palestinian political prisoner being held for life in Israel, has spent nearly two decades of his life in Israeli jails, including the past 11 years.

Approximately 30 others, who later this month are expected to exchange prison cells for larger prisons in occupied Palestine, are returning to a very different world – grown children, an even more dire political landscape, and a West that denigrates them while ignoring the crimes of their jailers.

Only a political prisoner can fully comprehend the ordeal of a fellow political prisoner. The experiences of solitary confinement, ill-treatment, separation from the outside world, and the progressive erosion of the concept of time, cannot be fully translated into words. Imprisonment leaves behind deep scars, both in your flesh and in your soul.

Not only does Israel face the threat of a flood of boycotts, it has also created what veteran Israeli peace activist Uri Avnery calls its own “self-boycott” by failing to send any high-ranking officials to the Mandela memorial. Avnery wrote this week:

Is there any possibility that John Kerry will bring the two negotiating parties to a peaceful solution? Avnery offers a reading of that possibility that is Neiburian in its mixture of hope and realism:

Netanyahu’s arguments presuppose that there will be no peace, not now, not ever. The putative peace agreement – which Israelis call the “permanent status agreement” – will just open another phase of the generations-old war.

This is the main obstacle. Israelis – almost all Israelis – cannot imagine a situation of peace. Neither they, nor their parents and grandparents, have ever experienced a day of peace in this country. Peace is something like the coming of the Messiah, something that has to be wished for, prayed for, but is never really expected to happen.

But peace does not mean, to paraphrase Carl von Clausewitz, the continuation of war by other means. It does not mean a truce or even an armistice.

Peace means living side by side. Peace means reconciliation, a genuine willingness to understand the other side, the readiness to get over old grievances, the slow growth of a new relationship, economic, social, personal.

To endure, peace must satisfy all parties. It requires a situation which all sides can live with, because it fulfils their basic aspirations.

Is this possible? Knowing the other side as well as most, I answer with utmost assurance: Yes, indeed. But it is not an automatic process. One has to work for it, invest in it, wage peace as one wages war.

Nelson Mandela did. That’s why the entire world attended his funeral. That, perhaps, is why our [Israeli] leaders chose to be absent.

As the song goes, is skipping the Mandela memorial a “lesson too late for the learning”?  Or is it an opportunity for Netanyahu to make a dramatic gesture and include Marwan Barghouthi in the prisoner release later this month?

Photo of John Kerry at  top is by Matty Stern/U.S. Embassy Tel Aviv

From 1972 through 1999, James M. Wall was editor and publisher of the Christian Century magazine, based in Chicago, lllinois. He was a Contributing Editor of the Century from 1999 until July, 2017. He has written this blog, wall writings.me, since it was launched April 27, 2008. If you would like to receive Wall Writings alerts when new postings are added to this site, send a note, saying, Please Add Me, to jameswall8@gmail.com Biography: Journalism was Jim's undergraduate college major at Emory University, Atlanta, Georgia. He has earned two MA degrees, one from Emory, and one from the University of Chicago, both in religion. He is an ordained United Methodist clergy person. He served for two years in the US Air Force, and three additional years in the USAF reserve. While serving on active duty with the Alaskan Command, he reached the rank of first lieutenant. He has worked as a sports writer for both the Atlanta Journal and Constitution, was editor of the United Methodist magazine, Christian Advocate for ten years, and editor and publisher of the Christian Century magazine for 27 years. James M Wall died March 22, 2021 at age 92. His family appreciates all of his readers, even those who may have disagreed with his well-informed writings.
View all posts by wallwritings →
This entry was posted in Middle East Politics. Bookmark the permalink.

5 Responses to If Talks Fail, Boycotts Will Arrive “On Steroids”