What Ike Feared “Has Come Upon Us” 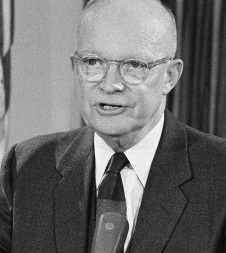 On February 3, Illinois Sixth District Republican Congressman Peter Roskam introduced a bill in the U.S. Congress that would defend Israel against any criticism from U.S. academics.

Roskam is responding to the December, 2013 vote of the American Studies Association (ASA) to boycott Israeli academic institutions for their role in the illegal Israeli occupation of the West Bank and Gaza.

The American people were told this day would come. In his Farewell Address, delivered on January 17, 1961, U.S. President Dwight Eisenhower (above) warned the nation to guard against the “unwarranted influence” of “the military-industrial complex”.

Fifty-three years later, to paraphrase Job, “that which Ike feared has come upon us.”

Melvin A. Goodman, a 24-year veteran of the CIA, and now a professor himself, was an undergraduate student at John Hopkins University in 1961. In his book, National Insecurity: The Cost of American Militarism, Goodman writes:

“In 1959 President Dwight Eisenhower began a dialogue with his brother, Milton, the president of Johns Hopkins University, regarding U.S. military policy. In the spring of 1961, a small group of undergraduates met with Milton Eisenhower to discuss the president’s farewell address.

Eisenhower informed us that he and a John Hopkins professor of political science , Michael Moos, played major roles in the drafting and editing of the farewell speech of January 1961″.

Milton Eisenhower explained that one of the drafts of the speech referred to the ‘military-industrial-congressional complex’, with the president himself inserting the reference to the role of Congress, When the farewell address was given, the reference to Congress did not appear. (p 31)

Milton asked his brother why he had not included his specific reference to the Congress. Eisenhower responded: “It was more than enough to take on the military and private industry  I couldn’t take on the Congress as well.”

This is the key sentence in Eisenhower’s address: “In the councils of government, we must guard against the acquisition of unwarranted influence, whether sought or unsought, by the military-industrial complex. The potential for the disastrous rise of misplaced power exists and will persist.”

That misplaced” power takes many forms. The bill Congressman Roskam presented to the Congress is a direct attack on the freedom of speech. The bill proposes to “amend the Higher Education Act of 1965 to prohibit an institution that participates in a boycott of Israeli academic institutions or scholars from being eligible for certain funds under that Act”.

Roskam calls his bill the “Protect Academic Freedom Act”, an oxymoronic title which contradicts itself by making it illegal for members of the academic community to exercise their academic freedom. 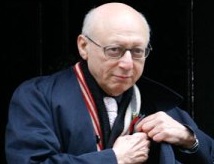 In contrast to Congressman Roskam’s subservience to Israel’s demands, a Jewish Member of England’s Parliament, Sir Gerald Kaufman (left), told the Parliament, “we must impose sanctions”. On February 5, Kaufman spoke during a debate in the British Parliament on the humanitarian situation in Gaza.

“I once led a delegation of 60 parliamentarians from 13 European parliaments to Gaza. I could no longer do that today because Gaza is practically inaccessible. The Israelis try to lay the responsibility on the Egyptians, but although the Egyptians’ closing of the tunnels has caused great hardship, it is the Israelis who have imposed the blockade and are the occupying power.

The culpability of the Israelis was demonstrated in the report to the UN by Richard Goldstone following Operation Cast Lead. After his report, he was harassed by Jewish organizations. At the end of a meeting I had with him in New York, his wife said to me, “It is good to meet another self-hating Jew.”

“Again and again, Israel seeks to justify the vile injustices that it imposes on the people of Gaza and the West Bank on the grounds of the holocaust. Last week, we commemorated the holocaust; 1.7 million Palestinians in Gaza are being penalized with that as the justification. That is unacceptable.”

Roskam’s bill was routinely referred to a committee, where it will no doubt linger long enough to gather the usual Zionist loyalists to add their names to the bill and curry favor with the likes of AIPAC. Chances of passage are nil. Proposed bills like this one are not meant to be; they are meant to send a message.

Ali Abunimah reports that Congressman Roskam got the idea for his bill/message from Israel’s former ambassador to the United States, Michael Oren, who made the suggestion a few weeks ago.

The symbiotic relationship between the U.S. and Israel is especially close in diplomatic interaction between the two nations.

Martin Indyk, for example, John Kerry’s current mediator in peace talks between Israel and Palestine, was born to Jewish parents in England. He was raised and educated in Australia before he moved to the U.S. and became a citizen. Subsequently he was named U.S. ambassador to Israel. Today he never leaves Kerry’s side as they struggle through the negotiations morass.

Making Kerry’s job more difficult, the U.S. Congress provides legislative support for Israel whenever Israel and its American lobbyists determine it is needed. After the ASA December vote, the Israel Lobby wanted action.

Prodded by Ambassador Oren, Congressman Roskam rushed to Israel’s rescue. The bill proposed by Roskam “would deny federal funding to any institution that participates in a boycott of Israeli universities or scholars or even whose departments issue statements in support of a boycott”.

This is how all encompassing the sanctions bill would be:

Meanwhile, as Congress defends Israel at every opportunity, the Boycott, Divestment, Sanctions (BDS) movement is gaining momentum, especially in Europe. The British Economist reported this week that BDS is turning “mainstream”, reaching into power circles that were once assumed to be immune to boycott pressure.

Financial institutions and some national governments are moving toward the BDS position.  The Economist reports:

Some European pension funds have withdrawn investments; some large corporations have cancelled contracts.  .  . BDS has begun to grab the attention of some of the world’s largest financial institutions. PGGM, a big Dutch pension fund, has liquidated its holdings in five Israeli banks (though the Netherlands’ largest has affirmed its investments). Norway’s finance ministry has announced that it is excluding Africa Israel Investments and its subsidiary, Danya Cebus, a big building firm, from a government pension fund.

.  .  .  Romania has forbidden its citizens from working for companies in the West Bank. More churches are backing BDS. An American academic association is boycotting Israeli lecturers. The debate turned viral after Scarlett Johansson, a Hollywood actor, quit her role as ambassador for Oxfam, a charity based in Britain, in order to keep her advertising contract with SodaStream.

Throughout his book, Goodman adds “congressional” to the “military-industrial-complex”, an acknowledgement that President Eisenhower had initially had “congressional” in his thinking.

The former president was very much aware of legislative power in the “military-industrial” complex. He knew this from his own experience as Supreme Commander of the Allied forces in the invasion of Europe in World War II, and of his dealings with Congress during his eight years in office as president.

The following video of Congressman Roskam illustrates the influence of the “military-industrial-congressional” complex on the U.S. government.

Addressing Roskam’s proposed bill, noted First Amendment lawyer, Floyd Abrams told Buzz Feed, “The notion that the power to fund colleges and their faculties may be transformed into a tool to punish them for engaging in constitutionally protected expression is contrary to any notion of academic freedom and to core First Amendment principles.”

This is precisely what President Eisenhower warned us against.

The picture at top of President Eisenhower speaking from the Oval Office on January 17, 1961, is from the Associated Press.

From 1972 through 1999, James M. Wall was editor and publisher of the Christian Century magazine, based in Chicago, lllinois. He was a Contributing Editor of the Century from 1999 until July, 2017. He has written this blog, wall writings.me, since it was launched April 27, 2008. If you would like to receive Wall Writings alerts when new postings are added to this site, send a note, saying, Please Add Me, to jameswall8@gmail.com Biography: Journalism was Jim's undergraduate college major at Emory University, Atlanta, Georgia. He has earned two MA degrees, one from Emory, and one from the University of Chicago, both in religion. He is an ordained United Methodist clergy person. He served for two years in the US Air Force, and three additional years in the USAF reserve. While serving on active duty with the Alaskan Command, he reached the rank of first lieutenant. He has worked as a sports writer for both the Atlanta Journal and Constitution, was editor of the United Methodist magazine, Christian Advocate for ten years, and editor and publisher of the Christian Century magazine for 27 years.
View all posts by wallwritings →
This entry was posted in Media, Middle East, Religious Faith. Bookmark the permalink.

8 Responses to What Ike Feared “Has Come Upon Us”