A Tale of Two Tapes 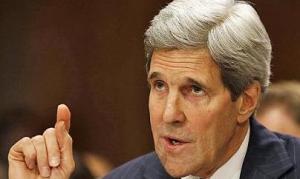 Two tapes have surfaced in recent days. Thereby hangs a modern tale of the “best of times and the worst of times”.

It is a bit of a stretch to use Charles Dickens to link the best of times represented by John Kerry, and the worst of times, embodied in the owner of an American professional basketball team.

But stretch is required in a world gone awry with both power and money much more than usual in the wrong hands. Hence, we have a tale of two tapes.

Tape number one is getting considerable media play because it involves the racist ravings of the owner of the Los Angeles Clippers, one of the better teams in the National Basketball Association.

Tape number two draws less attention, of course, but it happens to be of far greater significance, because it reveals U.S. Secretary of State John Kerry telling a group that Israel is in danger of heading toward international isolation as an apartheid state.

Charles Dickens begins A Tale of Two Cities: A Story of the French Revolution, in this manner:

US Secretary of State John Kerry has said that Israel risks becoming “an apartheid state” if there is no two-state solution to the Israeli-Palestinian conflict.

Kerry’s comments were published on Sunday by The Daily Beast news website, which obtained a recording of his remarks on Friday to the Trilateral Commission, a non-governmental organisation which includes senior officials and experts from the US, Western Europe, Russia and Japan.

Israel supporters who are deeply embedded in the U.S. government and its Israel Lobby satellites, reacted immediately to Kerry’s use of the word “apartheid”.

The attack on Kerry was predictable, lamentable, and further proof that Zionism rules our land in this the worst of our times.

Kerry, alas, was forced to walk the plank for his team, issuing a statement that he wishes he could rewind the tape and use a different word.

But use it he did, to the delight of folks like Aaron David Miller, a loyal Zionist in and out of government, who had his response ready when the New York Times called:

Aaron David Miller, a former American peace negotiator now at the Woodrow Wilson International Center for Scholars, said that Mr. Kerry’s comment had drawn him into an “unproductive fight with a close ally.”

“Baker and Kissinger used tough language when they thought they would not only be able to make a point, but would be able to make a difference,” Mr. Miller said of James A. Baker III and Henry A. Kissinger, both former secretaries of state. “But Kerry’s closed-door comment was ill timed, ill advised and unwise.”

Tape number two captures the ugly face of racism in a different arena. It is drawing considerable media attention this week during the first round of the NBA playoffs.

Professional sports in the U.S. has increasingly emerged as a corporate enterprise in which millionaires play games to entertain millions for the benefit of billionaires. One of the owners in the National Basketball Association was caught on tape recently talking to a young female friend. 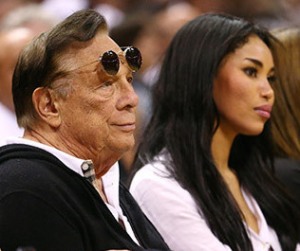 Sports Illustrated.com reports that the NBA “is investigating an audio recording in which [Los Angeles] Clippers owner Donald Sterling can allegedly be heard making a series of racist remarks to his girlfriend”.

The tape was initially released by TMZ.com. On the tape Sterling can allegedly be heard:

“We are in the process of conducting a full investigation into the audio recording obtained by TMZ,” the NBA said in a prepared statement. “The remarks heard on the recording are disturbing and offensive, but at this time we have no further information.”

TMZ posted excerpts of the audio conversation in which Sterling, who is married, is allegedly upset with Stiviano — who identifies herself as “black and Mexican” — for posting a photo with Hall of Famer Magic Johnson.

“It bothers me a lot that you want to broadcast that you’re associating with black people. Do you have to? You can sleep with [black people]. You can bring them in, you can do whatever you want. The little I ask you is not to promote it on that … and not to bring them to my games.”

The Clippers team, composed primarily of African American players, protested against their owner’s racist rant Sunday night by wearing their warm-ups inside out.

The National Basketball Association has banned Sterling “for life”, for his racist remarks. It will also fine him $2.5 million and push to have him sell the Clippers. Click here for the AP story.

These two tapes provide remarks which were not intended for public consumption. Each tape, however, speaks of racism from different ends of the international racist divide.

In Kerry’s remarks there is the overt warning that apartheid looms for Israel, a future status that Israel vigorously refuses to acknowledge, hiding behind a wall of deceit and oppression.

In the case of Clippers’ owner Donald Sterling, his racism is blatant and open in private conversation, employing words that reveal him to be indifferent to the inherent racism in what he says to his African American/Mexican female friend.

The investigation by the NBA league owners has lead to the league seeking to force Sterling to sell his team. One report says former Los Angeles star Magic Johnson has indicated his willingness to consider buying the team. Johnson denied the story.

Sterling has already had his share of legal problems. The New York Times reports:

In 2009, Mr. Sterling paid $2.725 million to settle a housing discrimination suit brought by the Justice Department, which accused him of systematically driving African-Americans, Latinos and families with children out of the apartment buildings he owned. In the settlement, Mr. Sterling did not admit wrongdoing.

The second tape in this “best of times, worst of times” scenario, involved remarks from John Kerry to the Trilateral Commission, an international organization which provides a forum for world leaders to speak among themselves.

This time, Kerry’s remarks did not stay in-house, but were shared with the world. As it turns out, this was a fortuitous sharing, evoking the usual Israeli and American Zionist outrage at the sound of an American Secretary of State using the dreaded A-word (apartheid).

The deadline Kerry initially set for finding a framework for the Israelis and Palestinians to follow in future months arrived Tuesday, April 29.

No framework has been found, for which each side blames the other.

Blame, however, is not the issue.  Apartheid and occupation are the two major issues that will continue to haunt both sides in the post-April 29 period. And blame for those issues, as John Kerry makes clear, rests with Israel.

Meanwhile, Israel tightens the screws on its occupation enforcement, while the Palestinians prepare to join United Nations agencies that will introduce the UN to the mix  as an even more significant player in the future.

Thus ends this “tale of two tapes”, a tale which features two Americans, John Kerry, the first U.S. Secretary of State to employ the term “apartheid” while still in office, and Donald Sterling, who emerged as this week’s American poster boy for racial bigotry.

The picture of John Kerry above, is from Al Jazeera. The picture of Clippers’ owner Donald Sterling, is from Getty Images/Sports. It appeared in Sports Illustrated.com.

From 1972 through 1999, James M. Wall was editor and publisher of the Christian Century magazine, based in Chicago, lllinois. He was a Contributing Editor of the Century from 1999 until July, 2017. He has written this blog, wall writings.me, since it was launched April 27, 2008. If you would like to receive Wall Writings alerts when new postings are added to this site, send a note, saying, Please Add Me, to jameswall8@gmail.com Biography: Journalism was Jim's undergraduate college major at Emory University, Atlanta, Georgia. He has earned two MA degrees, one from Emory, and one from the University of Chicago, both in religion. He is an ordained United Methodist clergy person. He served for two years in the US Air Force, and three additional years in the USAF reserve. While serving on active duty with the Alaskan Command, he reached the rank of first lieutenant. He has worked as a sports writer for both the Atlanta Journal and Constitution, was editor of the United Methodist magazine, Christian Advocate for ten years, and editor and publisher of the Christian Century magazine for 27 years.
View all posts by wallwritings →
This entry was posted in John Kerry, Middle East, Middle East Politics, Television. Bookmark the permalink.

3 Responses to A Tale of Two Tapes