U.S. Fear/War Mongers Win This Round

Posted on September 11, 2014 by wallwritings 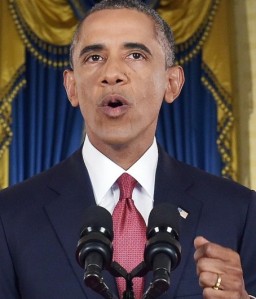 The American public doesn’t want to go to war unless there is something out there that frightens them.

This explains why all of our wars have been preceded by dire warnings of what will happen if we don’t militarily engage the enemy.

In President Obama’s Wednesday night speech, he repudiated his own caution and prudence by falling in line with those who think there is no fear out there that war cannot overcome.

The New York Times editorial board sonorously endorsed the President’s decision under a headline that informs the nation that the drums of war have had their effect: “The Attack on ISIS Expands to Syria.”

Gail Collins’ Times column the same day, “A Man With a Plan”, questions the wisdom of her editorial bosses, pointing to samples of the strategy congressional fear/war mongers employed to influence the President’s decision:

“President Obama’s chronic passivity has helped the jihadists,” John Cornyn of Texas, the second-ranking Senate Republican, said in a floor speech this week. Cornyn slammed the administration’s “don’t do stupid stuff” mantra, claiming Obama “doesn’t seem to fully grasp the magnitude of the threats and challenges that America is now dealing with.”

Collins reminds her readers of just why the President’s earliest caution and prudence made better sense than his decision to yield to the likes of John Cornyn. She further comments on Senator Cornyn’s call to action:

Cornyn mixed up Iranians and Iraqis a few times, but concerned citizens understand that these things get complicated. More to the point, not doing something stupid is actually a super foreign policy goal. Just look back on our recent history of meddling in the Middle East and what do you see? A heck of a lot of stupid stuff we wish we hadn’t done.”

Norman Solomon‘s Global Research column sums up Obama’s speech by pointing to what he calls “a liberal style of murmuring reservations while deferring to the essence of U.S. policies for perpetual war:” He concludes with this reminder that the Times is leading the national media pack with its support for Obama’s decision:

“Like the vast bulk of the rest of U.S. mass media, when push comes to militaristic shove, the New York Times refuses to make a break from the madness of perpetual war. In fact, with rare exceptions, the dominant media outlets end up fueling that madness.”

Charles Blow’s Times column,”The Cost of War”, reported on public opinion prior to the speech:

“According to a Washington Post/ABC News poll published Tuesday [September 9], a vast majority of Americans see ISIS as a threat to the United States, a slight majority believes the president hasn’t moved aggressively enough, and most support expanding United States airstrikes into Syria.”

Blow is not swayed by public support for airstrikes in Syria. In his column, he writes:

“I implore the president and the nation to proceed with caution.
We can kill anti-American fighters and even their leaders, but we can’t kill anti-American sentiment. To some degree, every time we commit our forces in the Middle East we run the risk of further inflaming that sentiment.”

In an earlier Times August 31 column, Blow anticipated the triumph of the fear/war mongers over Obama’s cautious approach, when he warned

“another part of the equation is the tremendous political pressure coming from the screeching of war hawks and an anxious and frightened public, weighted most heavily among Republicans and exacerbated by the right-wing media machine.”

In the days leading up to Obama’s speech, Blow reported:

​”​Republicans are beginning to pull out the big gun — 9/11 — to further scare the public into supporting more action. Senator Lindsey Graham has said on Fox News that we must act to “stop another 9/11,” possibly a larger one, and Representative Ileana Ros-Lehtinen has warned, “Sadly, we’re getting back to a pre-9/11 mentality, and that’s very dangerous.”

Fear is in the air. The president is trying to take a deliberative approach, but he may be drowned out by the drums of war and the chants for blood.

​After Obama’s speech, c​hants for blood, ​not unsurprisingly, came from Israel​ and its friends in the U.S.​

According to the Global Jewish News Service, Israelis love it when the U.S. comes into Israel’s neighborhood to wage war against any Arab force that Israel does not consider a  friend.

“President Obama did not mention Israel or the Palestinians during his national address Wednesday night. But his pledge to lead a U.S.-coordinated effort to destroy ISIS could end up doing more to get Israeli-Palestinian negotiations back on track than anything that Secretary of State Kerry and his team managed to produce with their shuttle diplomacy.

Reaching a final deal is hard enough when the region is calm. But it becomes significantly more difficult, if not impossible, when Islamic extremism is on the march and U.S. influence is in retreat.

Good luck convincing Israeli leaders that it is safe to abandon any part of the Golan Heights or the Jordan Valley as ISIS destabilizes the region and moves closer to its borders, especially with a president perceived as being more interested in golf and Asia than confronting the gathering storms in the Middle East.

History suggests that the most effective thing America can do to encourage Israeli risk-taking is to show that we’re serious about reducing regional threats to the Jewish state.”

President Obama was elected in 2008, in part because he rejected that interventionist policy. That was not the message the nation heard in President Obama’s Wednesday speech.

There is no question but that the armies of the so-called “Islamic State”, are guilty of horrendous war crimes. But ISIS is neither Islamic nor is it a state. It is a “terror” group that has no ideological goal other than to bring power to itself and grief to the world.

What we face today in Syria and Iraq requires counter terrorism, not war.

Norman Solomon points to the wisdom of an earlier New York Times Board editorial which was published more than a year ago:

Under the headline “The End of the Perpetual War,” published May 23, 2013, the Times was vehement, calling a Obama speech delivered that week, “the most important statement on counterterrorism policy since the 2001 attacks, a momentous turning point in post-9/11 America.”

“For the first time, a president stated clearly and unequivocally that the state of perpetual warfare that began nearly 12 years ago is unsustainable for a democracy and must come to an end in the not-too-distant future.”

The Times editorial board was sweeping in its 2013 conclusion:

“Mr. Obama told the world that the United States must return to a state in which counterterrorism is handled, as it always was before 2001, primarily by law enforcement and the intelligence agencies. That shift is essential to preserving the democratic system and rule of law for which the United States is fighting, and for repairing its badly damaged global image.”

The fear/war mongers got to the New York Times editorial board between May 23, 2013 and September 10, 2014. The Times and President Obama both gave in to the wrong people.

What remains to be seen is how long and how many deaths, will it take for them to acknowledge their joint mistake.

The picture, above, of President Obama delivering his September 10, 2014 speech was a Saul Loeb pool photo from Getty images.

From 1972 through 1999, James M. Wall was editor and publisher of the Christian Century magazine, based in Chicago, lllinois. He was a Contributing Editor of the Century from 1999 until July, 2017. He has written this blog, wall writings.me, since it was launched April 27, 2008. If you would like to receive Wall Writings alerts when new postings are added to this site, send a note, saying, Please Add Me, to jameswall8@gmail.com Biography: Journalism was Jim's undergraduate college major at Emory University, Atlanta, Georgia. He has earned two MA degrees, one from Emory, and one from the University of Chicago, both in religion. He is an ordained United Methodist clergy person. He served for two years in the US Air Force, and three additional years in the USAF reserve. While serving on active duty with the Alaskan Command, he reached the rank of first lieutenant. He has worked as a sports writer for both the Atlanta Journal and Constitution, was editor of the United Methodist magazine, Christian Advocate for ten years, and editor and publisher of the Christian Century magazine for 27 years. James M Wall died March 22, 2021 at age 92. His family appreciates all of his readers, even those who may have disagreed with his well-informed writings.
View all posts by wallwritings →
This entry was posted in Middle East, Middle East Politics, Obama, Politics and Elections, US govermemt, War. Bookmark the permalink.

6 Responses to U.S. Fear/War Mongers Win This Round