Will Clinton Enter White House With Israel in Tow? 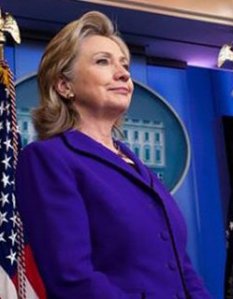 Former Secretary of State Hillary Clinton is the Democratic Party’s 2016 presumptive nominee for President. You knew that already.

What you may not yet know is that she is so confident in her nomination and subsequent victory over whichever Republican candidate arises from the shambles of the GOP nomination process, that she looks the other way from Israel’s 67-year-old illegal and immoral, oppressive and unrelenting occupation of Palestine.

The latest example of Clinton looking away from the occupation and embracing Israel, was starkly presented in a speech she delivered to the pro-Israel Saban Forum in Washington.

Philip Weiss was there and described his outrage:

“Yesterday (December 6) Hillary Clinton gave a speech in Washington at the Saban Forum of Brookings that included more pandering to Israel than any speech I’ve heard from any American politician. It was endless. Israel is a brave democracy, a light unto the nations, a miracle, its ‘prowess in war’ is ‘inspiring,’ and we must take the US-Israel relationship to the ‘next level.’

Our presumptive next president wants the US-Israel relationship to go to the “next level”?

“Introduced by her good friend the Israeli-American megadonor, Haim Saban, Clinton bragged that she and Israel were born a few months apart, gave a shoutout to Israel’s former lawyer in the White House, Dennis Ross, and assured Ari Shavit the rightwing Israeli columnist that the military option was still on the table with Iran.

“In fact, she repeatedly slammed Iran as a bad actor and did all she could to distance herself from the Iran deal and from secretary of state John Kerry, who gave a more realistic speech the day before.

“She never mentioned the occupation, vaguely touched on settlements as a problem, and praised the late Clintonite Sandy Berger as a ‘steadfast friend to Israel’.

Just as the Republican candidates had attacked Boycott, Divestment and Sanctions movement (BDS) at the Republican Jewish Coalition last week, ‘Clinton said that BDS was hurting the U.S.’s ability to fight terrorism. This is language straight out of Benjamin Netanyahu’s office’. (BF emphasis added).”

Of course, she is not alone in looking the other way in her Jericho Road stance. She is joined by PEPs (Progressive Except for Palestine), those among us who are progressive on traditional liberal issues except when confronted with the Palestinian Occupation.

After a speech like that, it is past time to look at the Good Samaritan parable Jesus told.

Think of Palestinian individuals under occupation who have repeatedly “fell among robbers, who stripped them and beat them, and departed, leaving them half dead”.

As Luke tells it, a priest and a Levite saw a man treated this way and they each “passed by on the other side”.

But he wanted to justify himself, so he asked Jesus, ‘And who is my neighbor?’

Jesus replied, ‘A man was going down from Jerusalem to Jericho, and he fell among robbers, who stripped him and beat him, and departed, leaving him half dead’.

Now by chance a priest was going down that road; and when he saw him he passed by on the other side.  So likewise a Levite, when he came to the place and saw him, passed by on the other side. But a Samaritan, as he journeyed, came to where he was; and when he saw him, he had compassion, and went to him and bound up his wounds, pouring on oil and wine; then he set him on his own beast and brought him to an inn, and took care of him.” (Luke 10:25-37 RSV)

Who is my neighbor?

The Good Samaritan parable does not weasel word it: Jesus wants us to pay particular attention to those who are beaten, stripped and left half-dead.

It is a matter of perspective. But can we not see that Hillary Clinton wants to snuggle even closer to a nation which has an occupying force guilty of robbing, beating, stripping and leaving its victims half dead (and often fully dead) by the side of Jericho roads throughout the occupied territories.

Hillary Clinton appears to be the best viable Democrat for the nomination.

She may stumble a bit in the first Iowa caucus, February 1, and even run behind Bernie Sanders in the New Hampshire primary, February 9, but Clinton is campaigning like a candidate already wondering how to write her first federal budget.

Give her this; she is one smart politician.  She reads more than the polls.  She reads the mood of the voting public. At this moment, she appears to be an almost certain nominee and final winner in the race for the White House.

But will she not read her conscience a bit closer? Can she not see that in that “snuggle close to Israel” speech she gave at the Saban Forum, she was on the side of the priest and the Levite, not the Samaritan?

The most powerful political office in the world is within her grasp. She will not halt wars and heal the dying by taking her relationship to the next level with an Israeli government eager to continue a 67-year-old military occupation because it has the military strength to do so.

Or, is it possible that our almost inevitable next world leader believes she can turn her “next level” Israeli relationship into a Good Samaritan force for good?

We can only hope and pray that the Samaritan route is her long-range intent. We do not have long to wait to find out.

The photo above is from hillaryclinton.com

10 Responses to Will Clinton Enter White House With Israel in Tow?