Was the Brexit Vote “Good for the Jews”? 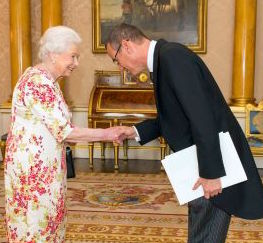 A Jewish mother hears her family cheering. She cries out, “what happened?” One of the men gathered around the radio, shouts back, “Mel Ott just hit a home run!”

She responds, “Is it good for the Jews”?

That is the version of the story I first heard in my sports writing days. Ott was not Jewish, but he played for, and managed, the New York Giants, which had a large Jewish fan base.

Stanley Fish explained the importance of the question of what is good for Jews, when he wrote in the New York Times, March 4, 2007:

Is it good for the gays? and on and on – as the paradigmatic question of identity politics, the politics that is derived not from some general, even universal, assertion of what is good, but from a particularized concern with insular interests. Is it good for us, for those of our kind, for our tribe?

It is no surprise that on both sides of the Atlantic, tribal media from all persuasions responded to the surprising Brexit vote with the Jewish mother’s question, “is it good for us?”

In the picture above, from Jerusalem’s Ha’aretz, Mark Regev, Israel’s new ambassador to England, meets Queen Elizabeth for a private audience at Buckingham Palace, London, June 24, the day after the Brexit vote. 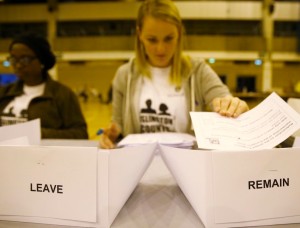 It is to be assumed the rejection of the European Union by the majority of the Queen’s subjects, was a major topic of their conversation.

In a story from Britain’s Independent, Regev is described as a staunch defender of Israel’s “security”. He is the former official spokesman for Israel’s Prime Minister, Benjamin Netanyahu:

The new ambassador will be one of the most high-profile members of the London diplomatic circuit, especially following the media exposure he received in his previous job [as media spokesman].

He will also bring with him a reputation for great tenacity in putting forward his country’s case during times of crisis, and infuriating critics while doing so.

From the U.S. progressive left, Robert Parry writes in Consortium, that the June 23 Brexit vote to exit the EU by the margin of 52% to 48%, could be good news for the powerless.

In the quotation below, Parry concludes with a nice turn inspired by Reinhold Niebuhr:

The United Kingdom’s “Brexit” vote may cause short-term economic pain and present long-term geopolitical risks, but it is a splash of ice water in the face of the West’s Establishment, which has grown more and more insular, elitist and unaccountable over recent decades.

The West’s powers-that-be, in both the United States and the European Union, too often display contempt for real democracy, maintaining only the façade of respecting the popular will, manipulating voters at election time with red-meat politics and empty promises – before getting back to the business of comforting the comfortable and letting the comfortable afflict the afflicted.

From Nazareth, British-born Jonathan Cook, wrote in his blog (reposted by Mondoweiss) on the Leave victory. He issues dire warnings to Israel and the established order:

The conventional wisdom, following Britain’s referendum result announced on Friday [June 24], holds that the narrow vote in favor of leaving the European Union – so-called Brexit – is evidence of a troubling resurgence of nationalism and isolationism across much of Europe.

That wisdom is wrong, or at least far too simplistic.

The outcome, which surprised many observers, attested to the deeply flawed nature of the referendum campaign. That, in turn, reflects a key failing of modern politics, not only in Britain but in most of the developed world: the re-emergence of an unaccountable political class.

The most distinctive feature of the campaign was the lack of an identifiable ideological battlefield. This was not about a clash of worldviews, values or even arguments. Rather, it was a contest in who could fearmonger most effectively.

The trends underpinning the Brexit vote should disturb Israeli prime minister Benjamin Netanyahu, just as they already are troubling the political class in Europe and the US.

Like the EU, Israel too, is a pillar of the old global order. A ‘Jewish homeland. emerged under British protection while Britain still ran an empire and saw the Middle East as its playground.

After the European colonial powers went into abeyance following the Second World War, the role of patron shifted to the new global hegemon in Washington. The US has endlessly indulged Israel, guarded its back at the United Nations, and heavily subsidised Israel’s powerful military industries.

Whereas the US has propped up Israel diplomatically and militarily, the EU has underwritten Israel’s economic success. It has violated its own constitution to give Israel special trading status and thereby turned Europe into Israel’s largest export market.

It has taken decades for Europe to even acknowledge – let alone remedy – the problem that it is also trading with illegal Jewish settlements in the West Bank.

If the EU starts to unravel, and US neoliberal hegemony weakens, Israel will be in trouble. It will be in desperate need of a new guarantor, one prepared to support a country that polls repeatedly show is mistrusted around the world.

Forward writer Mik Moore connects the Brexit vote to both Israel and the U.S.:

“Is it good for the Jews?” is as much a punchline as a question. And yet, whether the question is asked explicitly or not, there remains a corner of our community that brings a “good for the Jews” mentality to every concern. , , ,

In the immediate shadow of the Holocaust or pogroms, Jews were understandably guided by a sense of their own precariousness. That’s what should happen when governments are committed to your annihilation.

Distrust of the political class is growing by the day, and Israel is an issue on which US politicians are supremely vulnerable. It is increasingly hard to defend Congress’ historic rock-solid support for Israel as truly in American interests.

In his blog, written from Canada, Philip Lee, a native of Great Britain, expands the impact of the vote to the increasing right wing movement in Europe, under the headline: “Europe is coming apart at the seams”.:

A catastrophe looms post-Brexit and the United Kingdom has chosen to lose its voice.

European politics are in turmoil. In Austria, Norbert Hofer has narrowly failed to become Austria’s first far-right head of state. In France, Marine Le Pen has a good chance of winning next year’s presidential election. And in Poland, conservative president Andrzej Duda is intent on seizing control of the country’s media, judicial system, and constitutional tribunal (Poland’s highest court).

Government actions in Hungary were recently described by the president of the European Parliament as having the “characteristics of a coup”, and in Bulgaria the government has allocated $19 million to erect more razor-wire fences to prevent migrants from entering and has called out the army to secure its borders.

There are aggressive nationalist parties in Germany, Macedonia, Slovakia, Lithuania, Finland, Belgium, and on the “sceptred isle” itself, where extremist Britain First is trying to provoke what it calls a revolution in the streets through “militant direct action”, invading mosques, and targeting Muslim officials such as the new Mayor of London.

Philip Lee points further to Natalie Nougayrède’s article in the British Guardian which describes the vote as a wake-up call “to save Europe”.

Nougayrède writes that the vote has put “the cohesion and strength of western liberal democracies at stake in a global environment plagued with uncertainties. Now populist, far-right and anti-western forces will push forward in the belief that a precedent has been set for other ‘exits’.”

To quote Bob Dylan, the “times they are changing”, but unexpected events have a way of producing change in dramatic form. This could be one of those times.

The picture at top of Queen Elizabeth and Ambassador Regev is by Dominic Lipinsk,  for Reuters.

The picture of ballot counting is from a voting place in England. It was taken by Neil Hall for Reuters.

From 1972 through 1999, James M. Wall was editor and publisher of the Christian Century magazine, based in Chicago, lllinois. He was a Contributing Editor of the Century from 1999 until July, 2017. He has written this blog, wall writings.me, since it was launched April 27, 2008. If you would like to receive Wall Writings alerts when new postings are added to this site, send a note, saying, Please Add Me, to jameswall8@gmail.com Biography: Journalism was Jim's undergraduate college major at Emory University, Atlanta, Georgia. He has earned two MA degrees, one from Emory, and one from the University of Chicago, both in religion. He is an ordained United Methodist clergy person. He served for two years in the US Air Force, and three additional years in the USAF reserve. While serving on active duty with the Alaskan Command, he reached the rank of first lieutenant. He has worked as a sports writer for both the Atlanta Journal and Constitution, was editor of the United Methodist magazine, Christian Advocate for ten years, and editor and publisher of the Christian Century magazine for 27 years. James M Wall died March 22, 2021 at age 92. His family appreciates all of his readers, even those who may have disagreed with his well-informed writings.
View all posts by wallwritings →
This entry was posted in Israel, Jewish faith and tradition, Judiasm, Palestinians, Politics and Elections. Bookmark the permalink.

7 Responses to Was the Brexit Vote “Good for the Jews”?