A search for hope began with a viewing of the 2014 film, Interstellar, the mind-stretching movie directed by Christopher Nolan, and written by Christopher and his brother Jonathan Nolan. Interstellar is one of those motion pictures that lifts the spirits because it brings hope to human experience.

After viewing the nearly three-hour Interstellar, I came across Louis Menand, a writer who cuts through the miasma of contemporary politics by carefully observing the past.  For contemplation during this nation’s Independence Day week, The New Yorker chose to publish a collection of Menand’s essays, starting with his story of the dramatic and long-delayed passage of what became the 1964 Civil Rights Bill.

It was a bill that passed with an unplanned addition. Menand writes:

Most Americans who made it past the fourth grade have a pretty good idea who Thurgood Marshall, Rosa Parks, and Martin Luther King, Jr., were. Not many Americans have even heard of Alice Paul, Howard W. Smith, and Martha Griffiths.

This trio played significant roles in the history of women’s rights. They opened the way to equal economic opportunity. Nearly all the gains women have made in that area since the passage of that 1964 bill may be attributed to them.  What was peculiar about the achievement of Paul, Smith and Griffith, Menand explains, is that equality for gender became law only after it was slipped into a Civil Rights Bill drafted primarily to achieve equal rights for African American men and women.

The addition of “gender” to that Bill, “was accomplished in the face of the unequivocal opposition of the liberal establishment.” (The Menand essay should be read in full to appreciate the political machinations that led to the bill’s final passage.) In his essay, Louis Menand focuses on the equality for American women in the workplace. I choose to go a step further and focus on the gross inequality of citizenship between Israelis and Palestinians.

If that sound familiar, it should, because it is that same liberal establishment that has aided and abetted the state of Israel in its murderous military occupation of the people of Palestine since 1947.

This reluctance extends to punishment of any entity which stands in the way of the military dominance of the American empire. Ask New York Governor Cuomo (below) why he signed an anti-BDS executive order in New York City, June 5, with Ido Aharoni, the Israeli consul general, standing behind him. 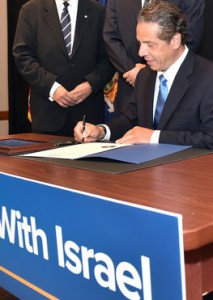 Menand examines the 1964 Civil Rights victory and points to it as a classic case of what the philosopher Frederich Hegel called “the cunning of reason, the way apparently random or anomalous events later turn out to be pieces in a larger historical design”.

Be forewarned Governor Andrew Cuomo, Hillary Clinton and Donald Trump, there is a “larger historical design” at play and you are each building a personal case of political cowardice which will judge you and your fellow establishment leaders when that “design” emerges in full view.

As a philosopher, Hegel stayed within the boundaries of secular language. For those in the Christian tradition, there is a parallel testimony to Hegel’s “cunning of reason” in William Cowper’s 19th century hymn:

God moves in a mysterious way; His wonders to perform; He plants His footsteps in the sea, and rides upon the storm.

Cowper’s words are his own, though they are often mistakenly attributed to the New Testament.

The “cunning of reason” is echoed in a biblical source, Romans 11:33:

“O the depth of the riches both of the wisdom and knowledge of God! how unsearchable are his judgments, and his ways past finding out!” (KJV).

In this week of fireworks and celebrations of American independence, there is most certainly “a larger historical design” even now pointing to the yet-unseen, but inevitable collapse of Israel’s illegal, occupation. 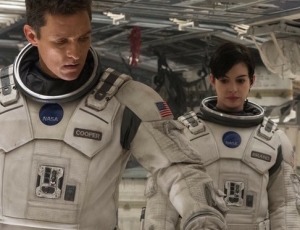 From film Director Christopher Nolan’s Interstellar perspective, Commander Cooper (Matthew McConaughey, left) successfully took his space craft through a black hole into the fifth dimension where he learned what lay ahead for the planet he had left behind.

Cooper returned to his past to confirm that future to the 10-year-old daughter, Murph, he had left on earth.

When he makes another journey, Murph is now an elderly woman surrounded by her own family. As a child, she had deeply resented her father for leaving her, but she never stopped working for the future she had been promised by her father.

The childhood Murph and the elderly Murph both believe, without articulating it, that they are part of a “larger historical design”. They do not know what lies ahead, but they knew they had a role to play in contributing to those random events revealed in Hagel’s “design”.

Around them all, known fully only from a higher dimension, the “historical design” continues to move forward in “apparently random or anomalous events”.

Photos from the film Interstellar are from Paramount Pictures. The picture of Governor Cuomo is by Kevin P. Coughlin of the Office of Governor Andrew M. Cuomo.

From 1972 through 1999, James M. Wall was editor and publisher of the Christian Century magazine, based in Chicago, lllinois. He was a Contributing Editor of the Century from 1999 until July, 2017. He has written this blog, wall writings.me, since it was launched April 27, 2008. If you would like to receive Wall Writings alerts when new postings are added to this site, send a note, saying, Please Add Me, to jameswall8@gmail.com Biography: Journalism was Jim's undergraduate college major at Emory University, Atlanta, Georgia. He has earned two MA degrees, one from Emory, and one from the University of Chicago, both in religion. He is an ordained United Methodist clergy person. He served for two years in the US Air Force, and three additional years in the USAF reserve. While serving on active duty with the Alaskan Command, he reached the rank of first lieutenant. He has worked as a sports writer for both the Atlanta Journal and Constitution, was editor of the United Methodist magazine, Christian Advocate for ten years, and editor and publisher of the Christian Century magazine for 27 years. James M Wall died March 22, 2021 at age 92. His family appreciates all of his readers, even those who may have disagreed with his well-informed writings.
View all posts by wallwritings →
This entry was posted in Donald Trump, Hillary Clinton, Israel, Middle East, Palestinians, Religious Faith. Bookmark the permalink.

6 Responses to “Cunning of Reason” Will End Israel’s Occupation