Fox News and the Division of America 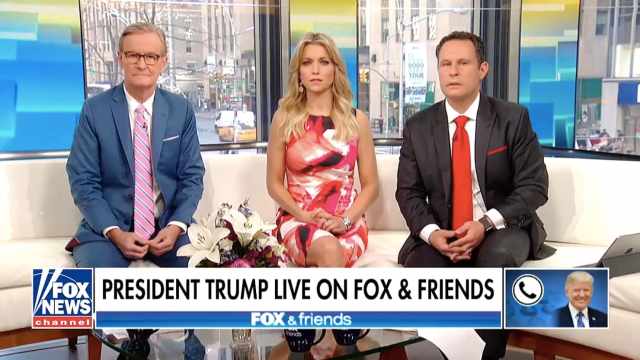 President Donald J. Trump has held the U.S. presidency for 1 year, 3 months and 8 days, as of Saturday night, April 28, the night on which he chose to hold a political rally in Washington Township, Michigan, while skipping his second straight Washington Correspondents dinner.

That base, as measured in polls, hovers in the mid 30% of the public. The President gives every indication through his tweets, and his major television ally, Fox News, that he actually believes that through the force of his personality public opinion will come to his side of the national yard.

His actions this week confirm and underscore this.

For thirty minutes, with no commercial breaks, President Trump shouted out a rambling series of hostile comments aimed at his “enemies, the “fake news” media, Democrats and all others who had yet to enter his embrace.

His hosts guided him, as best they could, with quick questions that encouraged his rambling.

Two days later, this Saturday night, the President is skipping the annual traditional Washington Correspondents dinner. Instead, he is holding a political rally in Michigan, one of the three mid-western states that handed him the 2016 election.

Look carefully at the Thursday morning faces of the hosts for Fox & Friends above. Those are faces displaying complacent loyalty, the same look the President expects to see emanating from his entire staff.

These are not journalists. They are folks whose network is deeply invested in the success of this President. Fox News is owned and controlled by Rupert Murdoch, whose extreme conservative ideology and deep pockets are the driving force behind Murdoch’s media power center.

Murdoch uses that center, and his money, to reshape American society, its governments and its culture, in Murdoch’s ideological image.

As the Australian-born mogul strips away his entertainment properties to create what he called “the new Fox” — essentially, Fox News, Fox Business Network, the national Fox sports networks, his broadcast network and local stations — several analysts suggested that the deal might provide more opportunities for Fox News to extend its footprint into the broadcast realm.

To be fair, and state the obvious, MSNBC tries to do the same thing for Progressives, though not nearly with the success of Fox.

Right now, however, in this dark hour in American history, we are looking at the Trump moment, as three Trump loyalists ask the Boss “questions” to highlight his favorite talking-points on a Thursday morning.

On this Saturday night two days later, the Trump Division Plan continues. The President is not in Washington engaging with a collection of journalists he calls “fake”. He is basking in the warm embrace of his voters in Michigan.

I close this posting by calling attention to the fact that this weekend marks the tenth anniversary of this blog, wallwritings.me. As I began the blog ten years ago on April 27, 2008, the Democratic party was involved in a heated campaign that pitted Hillary Clinton against Barack Obama for the 2008 Democratic nomination for president.

To celebrate ten years of this blog site, I reprint below my closing words for that first posting. To read the full first posting, click on Wall Writings.

The Rev. Jeremiah Wright spoke to an enthusiastic, supportive crowd of 10,000 at an NAACP dinner Sunday night. Earlier this weekend, on Bill Moyers’ Now PBS program Friday night Rev. Wright spoke calmly of his preaching style, which is anything but calm in the pulpit.

He noted, for example, that Psalm 137 was the text he used in his sermon right after 9/11. He says the children of Israel were in exile and they were angry at those who took them into exile. He used the text to trace the history of the US mistreatment of non whites, Native Americans, African Americans, and more recently, the people of Palestine and Iraq.

The writer of Psalm 137 wanted revenge against their captors and proclaimed that the Israelites were ready to smash the heads of children whose parents had brought such pain to them. (Look it up) Wright said he told his congregation that it would be wrong to respond to 911 by seeking revenge. Preaching a few days after 9/11 he spoke in prophetic language of what happens to a nation when it mistreats others and ended by suggesting that the attack was an indication that “America’s chickens have come home to roost”.

In an Associated Press story of Dr. Wright’s speech to the NAACP in Detroit he was quoted as saying, ‘I describe the conditions in this country,’” The story noted that despite what his critics say, he is descriptive, not divisive, when he speaks about racial injustices. “I describe the conditions in this country. . . “I’m not a politician. I know that fact will surprise many of you because many in the corporate-owned media made it seem like I am running for the Oval Office. I am not running for the Oval Office. I’ve been running for Jesus a long, long time, and I’m not tired yet.”

Another man who is not tired is Jimmy Carter. He is just back from peace missions to Nepal and Israel-Palestine. His op ed column on the trip is in today’s New York Times.

Thus endeth the first Wall Writings posting from ten years ago, April 27, 2008. Readers are invited to draw their own conclusions as to changes in American politics during the past decade, up to and including, April 28, 2018.

From 1972 through 1999, James M. Wall was editor and publisher of the Christian Century magazine, based in Chicago, lllinois. He was a Contributing Editor of the Century from 1999 until July, 2017. He has written this blog, wall writings.me, since it was launched April 27, 2008. If you would like to receive Wall Writings alerts when new postings are added to this site, send a note, saying, Please Add Me, to jameswall8@gmail.com Biography: Journalism was Jim's undergraduate college major at Emory University, Atlanta, Georgia. He has earned two MA degrees, one from Emory, and one from the University of Chicago, both in religion. He is an ordained United Methodist clergy person. He served for two years in the US Air Force, and three additional years in the USAF reserve. While serving on active duty with the Alaskan Command, he reached the rank of first lieutenant. He has worked as a sports writer for both the Atlanta Journal and Constitution, was editor of the United Methodist magazine, Christian Advocate for ten years, and editor and publisher of the Christian Century magazine for 27 years.
View all posts by wallwritings →
This entry was posted in Donald Trump, Hillary Clinton, Jimmy Carter, Media, Obama, Television. Bookmark the permalink.

12 Responses to Fox News and the Division of America