This Bishop Is Not Finished With Us Yet

I first met E.J. Dionne, Jr. during my first stint as Jimmy Carter’s 1976 Illinois campaign chair. We huddled for lunch in a corner deli across the street from our Chicago campaign headquarters.

I was surprised and delighted to discover a young Washington Post reporter who was so knowledgeable about the significance of Carter’s religious faith.

Forty-two years later, after following his political coverage for more than four decades, I still trust E.J.’s sensitivity to the moral dimension of the murky world of politics. As one of my political colleagues puts it, “he gets it”.

Latest example of that sensitivity came this week when Dionne, now a columnist for the Post, captured the impact of a Royal wedding sermon delivered in London by the Most Rev. Michael Curry, the bride’s Presiding Episcopal Bishop.

​​Maybe it takes a royal wedding to offer lessons in what a good sermon sounds like.

Maybe it takes one of the world’s most elitist institutions — a monarchy, for goodness’ sake — to provide a view of Christianity rooted not in conservative cultural warfare (or unrelenting support for President Trump) but in an egalitarian love that will “let justice roll down like a mighty stream.”

And the Most Rev. Michael Curry, who preached for a royal couple and the world last Saturday, isn’t finished with us yet.​

Next up on Curry’s calendar is a march in Washington, which the Bishop will lead.

On Thursday, a group of Christians will march to the capital for a candlelight vigil inspired by a declaration titled “Reclaiming Jesus: A Confession of Faith in a Time of Crisis.”

The presiding bishop and primate of the Episcopal Church, Curry is a prime mover of a statement suffused with a sense of urgency about “a dangerous crisis of moral and political leadership at the highest levels of our government.”

While Trump lurks behind almost every paragraph of this passionate assertion of faith, he is never mentioned. This reflects the desire of the endorsers to focus on what it means to proclaim that “Jesus is Lord.” The opening paragraph makes this clear: “We believe the soul of the nation and the integrity of faith are now at stake.”

The nation’s soul is also receiving an extended examination by another author, Jon 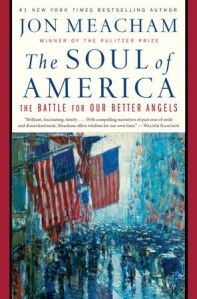 Meacham, whose latest book, The Soul of a Nation:The Battle for Our Better Angels is reviewed by Sean Wilentz in The New York Times.

At the close of his First Inaugural Address, President Abraham Lincoln entreated the seceding slaveholders to “swell the chorus of the Union” until the nation was touched “by the better angels of our nature.” It is among the most eloquent sentences by our most eloquent president, and subsequent speechwriters and pundits have quoted it nearly to death.

But as Lincoln knew well, eloquence is not necessarily the same as efficacy. Five weeks after his inauguration, the secessionists fired on Fort Sumter and the slaughter of the Civil War began.

Jon Meacham is the latest writer to cite Lincoln’s plea, which helps suggest why his new book, “The Soul of America,” is at once so engaging and troubling. Appalled by the ascendancy of Donald J. Trump, and shaken by the deadly white nationalist rallies in Charlottesville in 2017, Meacham returns to other moments in our history when fear and division seemed rampant.

He wants to remind us that the current political turmoil is not unprecedented, that as a nation we have survived times worse than this.. . . .

Meacham begins his survey of our “worse” moments with our Civil War. Covering the century that began with slavery’s abolition, Meacham reminds us that recovery from these “worse” moments takes time.

He traces that century from the 1860s to the civil rights victories of the 1960s. To reach these victories, “the nation has required activist liberal presidents — above all Theodore Roosevelt, Franklin D. Roosevelt, Harry S. Truman and Lyndon B. Johnson — to replace fear with hope and then to reverse injustice and expand equality”.

Our better angels, Meacham implies, reside in that part of the American soul that inspired the Square Deal, the New Deal and the Great Society.

Meacham is a presidential historian who is currently a Visiting Professor of Political Science at Vanderbilt University.  A former Editor-in-Chief of Newsweek, Meacham was awarded the 2009 Pulitzer Prize for Biography or Autobiography for his book, American Lion: Andrew Jackson in the White House.

Presiding Episcopal Bishop Michael Curry, preacher and activist, is not done with us yet. Journalist E.J. Dionne, Jr. is not done with us either. Nor is presidential historian Jon Meacham. They each know the need for morality in politics. They “get  it”.

In the darkness of the era of Trumpism, these three are bright lights giving us hope that the future need not be dark. Our task is to read, write, learn and act, from our unique platforms.

The picture of Bishop Curry is a screen shot.

From 1972 through 1999, James M. Wall was editor and publisher of the Christian Century magazine, based in Chicago, lllinois. He was a Contributing Editor of the Century from 1999 until July, 2017. He has written this blog, wall writings.me, since it was launched April 27, 2008. If you would like to receive Wall Writings alerts when new postings are added to this site, send a note, saying, Please Add Me, to jameswall8@gmail.com Biography: Journalism was Jim's undergraduate college major at Emory University, Atlanta, Georgia. He has earned two MA degrees, one from Emory, and one from the University of Chicago, both in religion. He is an ordained United Methodist clergy person. He served for two years in the US Air Force, and three additional years in the USAF reserve. While serving on active duty with the Alaskan Command, he reached the rank of first lieutenant. He has worked as a sports writer for both the Atlanta Journal and Constitution, was editor of the United Methodist magazine, Christian Advocate for ten years, and editor and publisher of the Christian Century magazine for 27 years. James M Wall died March 22, 2021 at age 92. His family appreciates all of his readers, even those who may have disagreed with his well-informed writings.
View all posts by wallwritings →
This entry was posted in Episcopal Church, Jimmy Carter, Martin Luther King Jr., Religious Faith. Bookmark the permalink.

4 Responses to This Bishop Is Not Finished With Us Yet