“God of our weary years, God of our silent tears”— James Weldon Johnson

Posted on August 5, 2013 by wallwritings

This blog has an internal statistics page which reports a daily compilation of the number of “visits” to the current posting. The same page also reports on visits to previous postings.

That posting, entitled, “Lift Every Voice and Sing”, began:

After Barack Hussein Obama became the 44th president of the United States, he delivered a stirring inaugural address that called on Americans to join with him in addressing the problems facing the nation.

“Today I say to you that the challenges we face are real. They are serious and they are many. They will not be met easily nor in a short span of time. But know this, America — they will be met.”

Further along in the 2009 posting, I added this about the inauguration:

Obama’s speech was followed by a benediction from 87-year-old [The Reverend] Joseph Lowery (above), from Atlanta, Georgia, whose opening words must have sounded familiar to the millions of African Americans in the crowd and around the nation.

Lowery’s prayer began with the third verse of James Weldon Johnson’s hymn, “Lift Every Voice and Sing”, which, since it was written in 1920, has emerged as the “national anthem” of the African American community.

During these late summer weeks, as we await the closely-guarded news from the ongoing “peace talks” between Israel and Palestine, the third verse of “Lift Every Voice” appears even more relevant today than it was in 2009. Here are the words that begin the third verse:

“God of our weary years, God of our silent tears,

Thou who hast brought us thus far along the way;

Thou who hast by Thy might Led us into the light,

Keep us forever in the path, we pray.”

James Weldon Johnson’s words are significant today because pessimism surrounds the peace talks. Until we hear further from the negotiations participants, we must wait to see how the occupier and the occupied resolve, for the time being at least, how they will live together.

It is in this time of waiting that I decided to set out on a journey that begins with Johnson’s hymn. On the internet journey I followed a path that led to another eloquent African-American author, Alice Walker.  Novelist and poet, Walker has written more than thirty books, the best known of which is her Pulitzer Prize winning novel The Color Purple.

In one of the speeches she delivered to a Palestinian audience during a visit to Ramallah, Walker described her encounter with Israeli border guards when she traveled from Amman to the West Bank by way of the Allenby Bridge.

As the hours of interrogation dragged by at the Allenby Bridge, Walker finally asked one of the young Israeli soldiers peppering her with the usual irrelevant questions, have you ever heard of the novel,  The Color Purple.

The soldier had not heard of the novel nor the film based on the novel, even though the film was directed by Steven Spielberg, an Israeli favorite.

After that visit, which was organized by TEDxRamallah, Walker tried to enter Gaza on a different mission.

In June, 2011, Walker was among 38 people aboard the ship, Audacity of Hope, one of  the ships which tried, and failed, to sail from Greece to Gaza to break the Israeli maritime siege of Gaza. Israel prevailed on Greece to prevent the ships from sailing. 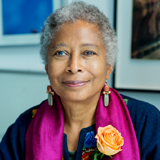 In a 2011 conversation with Ali Abunimah, Walker (right) pointed to the parallels “between the [planned] Gaza Freedom Flotilla and the Freedom Rides during the US Civil Rights movement when black and white Americans boarded interstate buses together to break the laws requiring racial segregation.”

Former CIA analyst Ray McGovern, was one of the activists who tried and failed, to sail from Greece to Gaza. Of that effort, McGovern wrote:

My co-passengers [including Alice Walker] and I, of the U.S. Boat to Gaza. have now gone from “High-Seas Hippies,” according to the right-wing Washington Times, to participants in a flotilla full of “fools, knaves, hypocrites, bigots, and supporters of terrorism,” says Alan Dershowitz in his usual measured prose.

Poor Alan, he seems upset at our audacity not only to hope for humane treatment of the 1.6 million Gazans, who currently live under a cruel blockade, but to force the issue. To stop our boat before it could leave Greek waters, Israel’s Likud government gave itself a self-inflicted black eye and again brought the oppression of Gazans to worldwide attention.

Phillip C. Wilcox, Jr., president of the Foundation for Middle East Peace, sees a connection between attention drawn to Israel’s occupation and the current peace talks. In this summer’s issue of the Foundation’s “Report on Israeli Settlements”, Wilcox wrote:

In Israel, there is credible speculation that Netanyahu agreed to new peace talks, notwithstanding the strident rejectionism of his closest coalition allies, because he is beginning to grasp the growing alienation of the international community over Israel’s unyielding occupation and settlement policies.

The recent decision of the European Union to cease all EU expenditures for Israeli activities in the occupied territories was a shock to Netanyahu. It may have prompted his sudden willingness to yield to negotiations.

Not a bad day’s work for a group of what Alan Dershowitz calls,  “fools, knaves, hypocrites, bigots, and supporters of terrorism,” since we may assume that anyone working to end the occupation falls into the Dershowitz condemned bucket.

Since I began this posting by violating scholar and author Martin Marty’s cardinal rule against a writer quoting himself or herself, I will jump into Dershowitz’s bucket by quoting from another recent Wall Writings posting, “One Day Ramallah Will Rise Up”, in which I wrote:

There is no doubt that [Israeli columnists] [Gideon] Levy and [Uri] Avnery have sensed the presence of a “hidden mechanism” of change in Palestine.  It is a change happening in Ramallah, Palestine’s temporary capital, and in the rest of the West Bank, the Golan Heights, and in Gaza.

My journey following the path of Alice Walker turned up many examples of the gentle manner in which this remarkable woman stands for justice for the Palestinian people. For example, she is an avid supporter of the BDS (Boycott, Divestment, Sanctions) movement.

When she learned that Alicia Keys, another African-American woman active in public life, had accepted an invitation to perform in a music concert in Israel on July 4, Walker wrote to Keys, as an older sister would write to a younger sister. Part of the letter includes this request:

If you go to my website and blog alicewalkersgarden.com you can quickly find many articles I have written over the years that explain why a cultural boycott of Israel and Israeli institutions (not individuals) is the only option left to artists who cannot bear the unconscionable harm Israel inflicts every day on the people of Palestine, whose major “crime” is that they exist in their own land, land that Israel wants to control as its own. Under a campaign named ‘Brand Israel’, Israeli officials have stated specifically their intent to downplay the Palestinian conflict by using culture and arts to showcase Israel as a modern, welcoming place.

This is actually a wonderful opportunity for you to learn about something sorrowful, and amazing: that our government (Obama in particular) supports a system that is cruel, unjust, and unbelievably evil. You can spend months, and years, as I have, pondering this situation. Layer upon layer of lies, misinformation, fear, cowardice and complicity. Greed. It is a vast eye-opener into the causes of much of the affliction in our suffering world.

For those who would like to earn extra credit in this journey to discover more about Alice Walker, there are two in-depth interviews of Walker by Amy Goodman on Democracy Now. You may access these interviews, Part One here and Part Two, here.

Finally, in following the path of Alice Walker through the internet, our journey brought me home to Georgia, to my own alma mater, Emory University.

Alice Walker placed the archive of her work in the Manuscript,  Archives,  and Rare Book Library of Emory University in 2008. The Walker Archive was opened in 2009.

One video from the evening honoring Walker features historian-activist Howard Zinn who initially met Alice Walker at Spelman College in Atlanta where he was her teacher during the 1960’s. To view that video, click here.

The Emory event honoring Alice Walker closed with the singing of James Weldon Johnson’s “Life Every Voice and Sing,” the African-American “national anthem” with which we began this journey.  In this way, the circle closes, from James Weldon Johnson, to the Rev. James Lowrey, to President Barack Obama, and finally to Alice Walker.

The young man who leads the singing that closes the evening is an Emory graduate, class of 2011. His name is Garrett M. Turner. He is currently pursing further graduate work at the University of St. Andrews in Scotland.

The circle grows, regardless of the outcome of the current “peace talks” negotiations.

From 1972 through 1999, James M. Wall was editor and publisher of the Christian Century magazine, based in Chicago, lllinois. He was a Contributing Editor of the Century from 1999 until July, 2017. He has written this blog, wall writings.me, since it was launched April 27, 2008. If you would like to receive Wall Writings alerts when new postings are added to this site, send a note, saying, Please Add Me, to jameswall8@gmail.com Biography: Journalism was Jim's undergraduate college major at Emory University, Atlanta, Georgia. He has earned two MA degrees, one from Emory, and one from the University of Chicago, both in religion. He is an ordained United Methodist clergy person. He served for two years in the US Air Force, and three additional years in the USAF reserve. While serving on active duty with the Alaskan Command, he reached the rank of first lieutenant. He has worked as a sports writer for both the Atlanta Journal and Constitution, was editor of the United Methodist magazine, Christian Advocate for ten years, and editor and publisher of the Christian Century magazine for 27 years.
View all posts by wallwritings →
This entry was posted in -Archive 2008, Middle East, Middle East Politics, Netanyahu, Obama. Bookmark the permalink.

7 Responses to “God of our weary years, God of our silent tears”— James Weldon Johnson