Is Israel Serious About Peace? 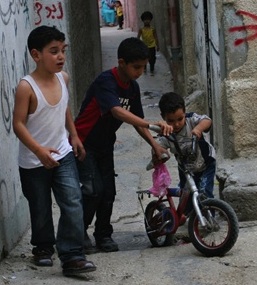 Is Israel serious about peace? Recent events say the answer is no.

A few weeks after a new round of U.S.-sponsored talks began between Israelis and Palestinians, Israel activated its plan to construct 1,500 apartments in East Jerusalem.

The new construction will be in the neighborhood of Ramat Shlomo, the project initially announced by Israel during U.S. Vice President Joe Biden’s 2010 visit to Israel.

The IDF said it was looking for a “terrorist” suspect, Yousef al-Khatib, a recently-released prisoner who had been incarcerated for ten years in an Israeli army prison.

These nighttime searches for “terrorists” have long been routine in Palestine refugee camps like Qalandia.

Aljazeera reports that Israeli forces have killed 14 Palestinians in the occupied territory this year, most of them in what Israel describes as “clashes”. Three Palestinians were killed in the same period in 2012. In the Qalandia camp, three Palestinian men were shot and killed during Monday’s raid.

UNRWA said one of those killed on Monday was Robin al-Abed, a 34-year-old father of four, who worked for UNRWA. He was walking to work when he was shot in the chest. The agency condemned the killing.

To protest the killings, Palestinian President Mahmoud Abbas cancelled Monday night’s peace session.  Meanwhile, the question persists: Does Israel have a government that is serious about peace?

Perhaps a more pertinent question would be: Why should Israel even pretend to be serious about peace when it already has the peace it wants.

That peace is called “occupation”, a state of affairs in which an invading army assumes total and permanent control of an occupied population.

Israel’s occupation is sustained, encouraged and funded by the United States.  U.S. public opinion tolerates, ignores and in some sectors, strongly supports the occupation, thanks in no small measure to Israel’s propaganda assistant institutions in the U.S., including the media and the churches, agencies which are supposed to be holding the public to higher moral standards.

Note to future empire builders: Your best Fifth Column operatives will be in institutions that shape public opinion.

Israel’s occupation is not about security. It is all about maintaining what we should have long ago admitted is a “Carthaginian peace”.

A Carthaginian peace describes a deceptive agreement that over the centuries has emerged as synonymous with any plan enforced by a winning side in a conflict which leads to nothing less than the total submission of a defeated enemy.

The Versailles treaty that followed World War I is the most recent example. That treaty is a Carthaginian peace because the victorious Allied nations designed a “peace” intended to leave Germany as a weakened state. That action, of course, led to the rise of Hitler and the Holocaust.

A Carthaginian peace is not without its consequences.

The term originated in 146 BC after the Roman army  totally destroyed Carthage, a destruction that left behind only ruins to be visited by tourists.

The Third Punic War  (149 BC to 146 BC) was the third and last of the Punic Wars fought between the former Phoenician colony of Carthage, and the Roman Republic. The Punic Wars were named because of the Roman name for Carthaginians: Punici, or Poenici.

The [third Punic] war was a much smaller engagement than the two previous Punic Wars and primarily consisted of a single main action, the Battle of Carthage, but resulted in the complete destruction of the city of Carthage, the annexation of all remaining Carthaginian territory by Rome, and the death or enslavement of the entire Carthaginian population. The Third Punic War ended Carthage’s independent existence.

We don’t hear much about Carthage these days.  Except when a movie script remembers. The 1970 movie Patton,  includes a scene in which General George S. Patton (George C. Scott, right) ordered his young aide to drive him to the ancient Carthage battlefield in present-day Tunisia. Patton tells his aide:

“It was here. The battlefield was here. The Carthaginians defending the city were attacked by three Roman Legions. Carthaginians were proud and brave but they couldn’t hold. They were massacred. [Local] women stripped them of their tunics and their swords and lances. The soldiers lay naked in the sun, two thousand years ago. . . .”

Of course, the John Kerry-moderated peace negotiations will continue. Public opinion wants it that way.

Can we expect new Israeli housing construction in the West Bank to stop during these talks?  Will there be a halt to night raids that terrify Palestinian children and kill their parents? Don’t count on it.

The peace talks are a good gig for Israel.  They pretend a dictatorial ruler’s quest for peace without having to take any actual steps  to make peace possible.

Of course, the talking will proceed.  When they finally stop, Palestine will have received a few scattered crumbs to bolster its economy. Sources within Palestine do not envision major industries like the Palestinian natural gas fields to be among the crumbs shared after the peace talks.

It sounds, in short, like the current peace talks–as we now know from a nighttime raid on Qalandia and the construction of Israeli housing in the West Bank—will end with yet another peace agreement, a Carthaginian peace agreement.

Sam Bahour, a Palestinian-American business development consultant from Youngstown, Ohio, now living in the Palestinian city of Al-Bireh in the West Bank, described in his blog, ePalestine, how he discovered the plan.

The first proclaimed leak, (in Arabic) from Secretary John Kerry’s efforts to resolve the Palestinian-Israeli conflict, as it is so often called, were published last week in the reputable London-based daily Arabic newspaper, Al-Hayat.

The source is said to be a posting on the website of the Palestinian Islamic Resistance Movement, Hamas, who claim the information was leaked to them by someone attending the tightly closed negotiating sessions.

The validity of this claim and the contents of the leak are unverifiable and the infighting between Hamas and Fatah give both a vested interest to publicly damage the other.

Here are just the opening proposals in the peace plan Bahour discovered and posted:

“The Separation Wall will serve as the security borders of the ‘Jewish’ state, and the temporary border of the ‘Palestinian’ state… Both parties will acknowledge and announce this.”   There will be “an exchange in disputed territories within the plan of the Separation Wall noted above, as agreed to by both parties and with the blessing of the Arab League Follow-up Committee, as specified by this Committee to Mr. Kerry during their last visit to Washington, ranging in size from eight to ten percent of West Bank lands.” There will be also be a “freeze in the settlement projects at a number of outposts, as approved by the Israeli government, which does not apply to existing projects in large settlement communities located in the vicinity of Jerusalem and in the Jordan Valley, including the settlements of Ma’ale Adumim, Givat Ze’ev, Har Homa, Gilo, Neve Yacov, Ramat Shlomo, Ramat Alman, Kiryat Arba’, and other densely populated settlements.”

There is more to this leaked plan, all of which may be read here.

Until John Kerry and his boss in the White House reject such Zionist extremism, this nation will continue to fund and endorse more IDF nighttime raids in refugee camps like Qalandia.

The picture above is from UNRWA. It was taken in the refugee camp of Al Am’ari.

From 1972 through 1999, James M. Wall was editor and publisher of the Christian Century magazine, based in Chicago, lllinois. He was a Contributing Editor of the Century from 1999 until July, 2017. He has written this blog, wall writings.me, since it was launched April 27, 2008. If you would like to receive Wall Writings alerts when new postings are added to this site, send a note, saying, Please Add Me, to jameswall8@gmail.com Biography: Journalism was Jim's undergraduate college major at Emory University, Atlanta, Georgia. He has earned two MA degrees, one from Emory, and one from the University of Chicago, both in religion. He is an ordained United Methodist clergy person. He served for two years in the US Air Force, and three additional years in the USAF reserve. While serving on active duty with the Alaskan Command, he reached the rank of first lieutenant. He has worked as a sports writer for both the Atlanta Journal and Constitution, was editor of the United Methodist magazine, Christian Advocate for ten years, and editor and publisher of the Christian Century magazine for 27 years. James M Wall died March 22, 2021 at age 92. His family appreciates all of his readers, even those who may have disagreed with his well-informed writings.
View all posts by wallwritings →
This entry was posted in John Kerry, Middle East Politics, US govermemt. Bookmark the permalink.

3 Responses to Is Israel Serious About Peace?