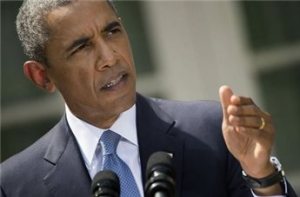 In a surprise move Saturday afternoon, President Barack Obama announced  he would ask for a Congressional debate before he would order any air strikes on Syria.

Speaking at a hastily-called press conference in the White House rose garden, the President said: “I will seek authorization for the use of force from the American people’s representatives in Congress.”

Ma’an, the Palestinian news service, notes that the decision to take the issue to Congress “represents a significant gamble for Obama”.

He “risks suffering the same fate as British Prime Minister David Cameron, who on Friday lost his own vote on authorizing military action”.

The television network, MSNBC, reported that White House officials point to Cameron’s defeat in the Parliament as one reason the President decided to delay action against Syria until Congress could return and hold its debate.

The U.S. House of Representatives confirms it will consider a measure on military action against Syria the week of Sept. 9, according to House Speaker John Boehner.

It has been a very long time since a British prime minister lost a war-and-peace vote in Parliament, as David Cameron did on Syria in a stinging personal defeat. He paid the price for the “dodgy dossier,” “Bush’s poodle” and all the other damning epithets that came to accompany Tony Blair’s support a decade ago of the war America fought in Iraq on false pretenses.

In addition to David Cameron’s defeat in Parliament, President Obama could not avoid the fact that he was already on record regarding a president’s need to obtain congressional approval for an attack on another nation.

Speaking in a Q and A session with the Boston Globe on December 20, 2007, then presidential candidate Obama was asked about talk of potential strikes against Iran:

“In what circumstances, if any, would the president have constitutional authority to bomb Iran without seeking a use-of-force authorization from Congress?”

“The President does not have power under the Constitution to unilaterally authorize a military attack in a situation that does not involve stopping an actual or imminent threat to the nation.

As Commander-in-Chief, the President does have a duty to protect and defend the United States. In instances of self-defense, the President would be within his constitutional authority to act before advising Congress or seeking its consent.

History has shown us time and again, however, that military action is most successful when it is authorized and supported by the Legislative branch. It is always preferable to have the informed consent of Congress prior to any military action.

When President George W. Bush built his “coalition of the willing” nations before his 2003 attack on Iraq, he secured the backing of the Arab League, a support that President Obama failed to gain in recent months.

Juan Cole writes that it is most likely the new military government of Egypt that cost Obama the support of the Arab League this time around.  Egypt, according to Cole, has also refused to support an American assault on Syria. Cole writes:

The newly assertive Egyptian military and the civilian transitional government in Egypt are helping make President Obama’s life difficult. Likely it was Egypt that blocked the Arab League from calling for intervention against the Syrian regime despite its condemnation of Damascus for using chemical weapons.

Egyptian foreign minister Nabil Fahmy rejected a Western strike on Syria. He said that no country could attack another save in self-defense or in the case of a UN Security Council resolution authorizing the use of force.

Members of Congress in search for more lucid arguments to take to the House and Senate, would do well to pay attention to the bill of particulars that Richard Falk has drawn up to remind us that the U.S. does not enter this discussion with clean hands.

The U.S. Government rains drone missiles on civilian human targets anywhere in the world, continues to operate Guantanamo in the face of universal condemnation, whitewashed Abu Ghraib, Bagram, and the torture memos, committed aggression against Iraq and Afghanistan, and invests billions to sustain its unlawful global surveillance capabilities.

Still, it has the audacity to lecture the world about ‘norm enforcement’ in the wake of the chemical weapons attack in the Ghouta suburb of Damascus. Someone should remind President Barack Obama and Secretary of State John Kerry that credibility with respect to international law begins at home and ends at the United Nations.

For eloquence and passion in delivery, opponents of an attack against Syria  will find an experienced model in the presentation below by British parliamentarian George Galloway made against David Cameron’s request for support for a U.S.-British attack on Syria.

Meanwhile, for the next ten days, the world, along with President Obama, must wait for a congressional decision on what the President is certain was a Syrian chemical weapon attack.

The picture above, of President Obama, was taken during his Saturday press event. It is by Jim Watson for AFP.

From 1972 through 1999, James M. Wall was editor and publisher of the Christian Century magazine, based in Chicago, lllinois. He was a Contributing Editor of the Century from 1999 until July, 2017. He has written this blog, wall writings.me, since it was launched April 27, 2008. If you would like to receive Wall Writings alerts when new postings are added to this site, send a note, saying, Please Add Me, to jameswall8@gmail.com Biography: Journalism was Jim's undergraduate college major at Emory University, Atlanta, Georgia. He has earned two MA degrees, one from Emory, and one from the University of Chicago, both in religion. He is an ordained United Methodist clergy person. He served for two years in the US Air Force, and three additional years in the USAF reserve. While serving on active duty with the Alaskan Command, he reached the rank of first lieutenant. He has worked as a sports writer for both the Atlanta Journal and Constitution, was editor of the United Methodist magazine, Christian Advocate for ten years, and editor and publisher of the Christian Century magazine for 27 years.
View all posts by wallwritings →
This entry was posted in Middle East Politics, Obama, United Nations, US govermemt, USA, War. Bookmark the permalink.

11 Responses to Obama Pauses; Calls for Debate in Congress