Max Blumenthal is a young Jewish American journalist whose father, Sidney Blumenthal, was a senior adviser to President Bill Clinton from August 1997 until January 2001.

His father’s political connections did not pave the way for his interviews.  All the son needed was his American passport and Jewish identity. Both Palestinians and Jews wanted to tell their stories.

In his research Blumenthal had easy access to major Israeli literary figures like Israeli novelist David Grossman. In his interview with Grossman, which he reports in his book, Blumenthal refers to his father’s earlier career in the Clinton administration.

What provoked this rare reference to his father was Grossman’s emotional defense of Israel as an essential safe haven for Jews.

For Grossman and liberal Zionists like him, the transformation of Israel from an ethnically exclusive Jewish state into a multiethnic democracy was not an option.

“For two thousand years”  Grossman told me when I asked why he believed the preservation of Zionism was necessary, “we have been kept out, we have been excluded.  And so for our whole history we were outsiders. Because of Zionism we finally have the chance to be insiders.”

In response, Blumenthal had an answer few are more qualified to give.

“I told Grossman that my father had been kind of an insider. He had served as a senior aide to Bill Clinton, the President of the United States, the leader of the free world, working alongside other proud Jews like Rahm Emmanuel and Sandy Berger. I told him I was a kind of insider and that my ambitions had never been obstructed by anti-Semitism.

“Honestly, I have a hard time taking this kind of justification seriously,” I told him. “I mean, Jews are enjoying a golden age in the United States.” 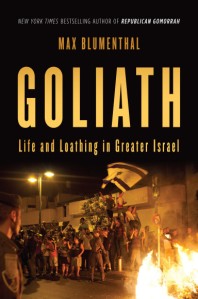 Blumenthal then reports that Grossman, a man of words, “found himself at a loss. He looked at me with a quizzical look. Very few Israelis understand American Jews as Americans, but instead of belonging to the Disapora. But very few American Jews think of themselves that way, especially in my generation, and that too is something very few Israelis grasp.” (p. 276)

The gap is wide, and growing wider, between American and Israeli Jews, a fact that Blumenthal, with his cultural and political background, is uniquely qualified to understand and describe.

Blumenthal knows radical politics however it is disguised. Before he began exploring the Israeli-Palestinian divide, Blumenthal wrote Republican Gomorrah: Inside the Movement that Shattered the Party“, an examination of the takeover of the Republican Party by its right wing faction.

Blumenthal’s book has suffered the twin burden of being ignored by mainstream media and, at the same time, drawing harsh criticism from within the liberal Zionist faction of American Jewry. Losing exposure in mainstream media is regrettable, since Blumenthal’s book, as one non-mainsteam reviewer writes, “is erudite, hard-hitting, and with the potential to influence American public opinion on Israel”.

When he appeared on Amy Goodman’s Democracy Now, Blumenthal offered his take on his book. Click here for a ten-minute video clip from that program.

In the Goodman interview, Blumenthal gives details of his journey through Israel and Palestine. Since he searched over a period of four years for the personal impact of the occupation on its Palestinian inhabitants, his highly negative reportorial conclusions are both enlightening and not surprising.

Erudite, hard-hitting, and with the potential to influence American public opinion on Israel, Goliath: Life and Loathing in Greater Israel, by Max Blumenthal, avoids mainstream liberals’ hand-wringing about the extent to which the occupation may at some point in the future adversely affect Israel’s much-vaunted democracy.

Instead, Blumenthal, the investigative American journalist who authored the bestselling Republican Gomorrah, focuses on how the ongoing occupation has, since its inception, destroyed Palestinian lives – and already whittled away much of Israel’s brittle democracy.

Goliath, the title of which implies that Israel resembles the giant Philistine warrior felled by the Jewish David in the Bible, also demolishes positive Western stereotypes about Israel’s treatment of its Palestinian citizens (so-called Israeli Arabs), a subject that rarely receives media coverage in the West.

Liberal Zionist and journalist Eric Alterman reached a totally different conclusion. He was greaty agitated when The Nation published a favorable review of the book.

His agitation led to two emotional pieces in The Nation. In his first column, Alterman writes as though he expected more balance on the topic from The Nation, a venerable liberal publication for which Alterman has been a regular contributor and columnist for several decades.

Here is a sample from Alterman’s first column.

Max Blumenthal’s Goliath, published by Nation Books, consists of seventy-three short chapters, each one devoted to some shortcoming of Israeli society and/or moral outrage that the Jewish state has perpetrated against the Palestinians. Some are titled to imply an equivalence between Israel and Nazi Germany (“The Concentration Camp,” “The Night of Broken Glass”); others merely evidence juvenile faux-cleverness (“How to Kill Goyim and Influence People”).

Israel is rarely wholly innocent in the stories Blumenthal tells. Its brutal military occupation of Palestinian land, now entering its forty-sixth year, has not only deeply damaged Israel’s democracy, but also desensitized its citizens to the daily humiliations it inflicts on the Palestinians. But Blumenthal proves a profoundly unreliable narrator. Alas, his case against the Jewish state is so carelessly constructed, it will likely alienate anyone but the most fanatical anti-Zionist extremists, and hence do nothing to advance the interests of the occupation’s victims.

Alterman’s insistance that the “other side” is missing from Blumenthal’s reporting is the standard Zionist argument that any conversation on this topic must never be conducted without the “other side” present and participating.

Haunted by the ever-present, and Zionist-encouraged, fear of appearing anti-semitic, Christian denominations and church leaders, as just one example, have embraced this “other side” argument by rushing to invite Jewish leaders to enter into church in-house conversations on Israel-Palestine.

Ira Glunts writes in Mondoweiss that in his second column on the book,  Alterman became even more personal in his attack on Blumenthal:

I expected to disagree with its analysis. I did not expect it to be remotely as awful as it is. Had the magazine not published its excerpt it would have been easy to ignore. It is no exaggeration to say that this book could have been published by the Hamas Book-of-the-Month Club (if it existed) without a single word change once it’s translated into Arabic. .  .  .

Goliath is a propaganda tract, not an argument as it does not even consider alternative explanations for the anti-Israel conclusions it reaches on every page. Its implicit equation of Israel with Nazis is also particularly distasteful to any fair-minded individual. And its larding of virtually every sentence with pointless adjectives designed to demonstrate the author’s distaste for his subject is as amateurish as it is ineffective.

As I said, arguments this simplistic and one-sided do the Palestinians no good. There will be no Palestinian state unless Israel agrees to it. And if these are the views of the people with whom Israelis of good will are expected to agree, well, you can hardly blame them for not trusting them.

Glunt adds: “This over-the-top indictment of Blumenthal and his book is more reflective of Alterman’s impassioned devotion to Israel than the contents of the work under review. Anyone familiar with Alterman’s copious writing on Israel would know that he would react angrily to the arguments presented by Blumenthal”.

Jeremiah (Jerry) Haber is the nom de plume of Charles H. Manekin, an orthodox Jewish studies and philosophy professor,  In his blog, Magnes Zionest , he writes:

I read half of Max Blumenthal’s new book Goliath on Shabbat, and I would like to send a copy to every Jew I know, especially every PEP Jew I know (“PEP” means “progressive except for Palestine.” ) This is the sort of book that even if you want to diss it, you can’t dismiss it. To quote PEP critic, Eric Alterman, the book is “mostly technically accurate”. And that should be enough to make anybody’s hair stand on end.

Clearly, Alterman and other leftwing American secularists can’t accept the unstated conclusion of the reportage that some of the fundamental problems of Israel are not due to a bunch of right-wing religious fanatics and nationalist Russians – not even due to Bibi and his crowd – but that, on the contrary, to core Zionist principles of the Ben Gurion school.

As Ari Shavit put it bluntly in this week’s [October 21, 2013] New Yorker, there could not have a Jewish state without inducing the mass departure of the native Palestinians in strategic areas like Lydda and elsewhere.

The story of how Israel was born as a modern state out of the horrors of the Nakba has been subsumed in the story of the Holocaust. Blumenthal found that even a small reference to the Nakba in a third-grade Israeli text was deleted.  When Prime Minister Benjamin Netanyahu returned to office he ordered all textbooks with Nakba references immediately confiscated.

The narrative of the Palestinian Nakba threatens Israel’s self-understanding as a democratic state. What liberal Zionists don’t like to face is that the modern state of Israel is fast becoming an ideological Zionist state, driven by, in Haber’s phrase above, “core Zionist principles of the Ben Gurion school”.

From 1972 through 1999, James M. Wall was editor and publisher of the Christian Century magazine, based in Chicago, lllinois. He was a Contributing Editor of the Century from 1999 until July, 2017. He has written this blog, wall writings.me, since it was launched April 27, 2008. If you would like to receive Wall Writings alerts when new postings are added to this site, send a note, saying, Please Add Me, to jameswall8@gmail.com Biography: Journalism was Jim's undergraduate college major at Emory University, Atlanta, Georgia. He has earned two MA degrees, one from Emory, and one from the University of Chicago, both in religion. He is an ordained United Methodist clergy person. He served for two years in the US Air Force, and three additional years in the USAF reserve. While serving on active duty with the Alaskan Command, he reached the rank of first lieutenant. He has worked as a sports writer for both the Atlanta Journal and Constitution, was editor of the United Methodist magazine, Christian Advocate for ten years, and editor and publisher of the Christian Century magazine for 27 years. James M Wall died March 22, 2021 at age 92. His family appreciates all of his readers, even those who may have disagreed with his well-informed writings.
View all posts by wallwritings →
This entry was posted in Middle East Politics, Netanyahu, Obama. Bookmark the permalink.