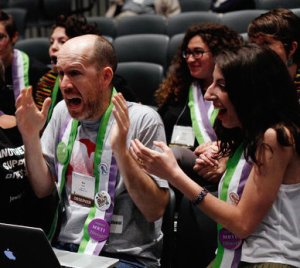 Ten years after the start of their divestment campaign against Israel’s occupation of Palestinian land and people, the Presbyterian Church (USA) anti-occupation forces have finally removed that denomination’s funds from the occupation.

The removal of PCUSA investments in those firms will neither end the occupation nor change Israel’s tactics over a captive population.  Total PCUSA investment in these firms is but a tiny portion of the Israeli military budget, a substantial amount of which is derived from annual U.S. gifts and loans.

The vote was not about the money; it was a moral vote against the occupation.

Through their divestment vote, U.S. Presbyterians are telling Israel, we do not support your occupation, no matter how hard you try to incorrectly shape the conversation as anti-Israel and anti-Hewlett Packard, Motorola and Caterpillar.

What will be the impact of the vote on U.S. public opinion? As with most major changes in history, the impact is usually incremental.  This vote was a small vote for humankind, a vote that should be remembered the way the 1833 vote taken in the British Parliament to end the slave trade, is remembered.

Christian evangelical William Wilberforce was a leader in the fight against slavery through much of his life. He was fighting against a strongly-entrenched economic system that profited from the slave trade. . Here is one account of that British Parliament vote:

Despite the groundswell of public opinion, Parliament still refused to ban slavery, until parliamentary reform removed many of its supporters. Despite this, it was still not clear that Parliament would act. Wilberforce wrote a last petition. The Parliamentary debate lasted three months.

On the 26th July, 1833, the Abolition of Slavery bill passed its third reading in the House of Commons. A messenger rushed to Wilberforce’s house. They told him that slavery in British colonies would finally be abolished. Just three days later, on 29th July, William Wilberforce died.

Other denominations now have the Presbyterians as a moral bellwether. If they pay attention, they have also seen the Israeli narrative playbook in operation.

With approximately 1.76 million members in 2013, the PCUSA is the third largest denomination among the seven major U.S. mainline churches.

The largest denomination among the Big Seven is the United Methodist Church (UMC), which reported almost 8 million U.S. members in 2008. Anti-occupation UMC forces recently achieved a major divestment victory when its Pension Board withdrew church funds from G4S, a British firm that supplies equipment for use in Israeli prisons housing Palestinian prisoners.

Word on the church “street” is that the UMC is gearing up for its own divestment battle at its 2016 General Conference. The results of the USPCS vote should encourage Methodist anti-occupation leaders to prepare for their own exit from the immoral occupation business.

The Methodists can expect to encounter the same playbook in 2016 that the anti-divestment forces used in the PCUSA General Assembly.

That playbook may well have contributed to the narrowness of the Presbyterian vote Friday. The New York Times story at the end of the 2012 General Assembly in Pittsburgh, PA, echoes stories that swept through the media this year after the 2014 vote.

In 2012 the vote was even closer than it was in 2014. It also achieved the opposite result. The New York Times story reported in 2012 that the General Assembly voted 333 to 331, with two abstentions not to divest from Hewlett Packard, Motorola and Caterpillar.

The decision not to divest, the culmination of an eight-year process, was watched intensely by Christians, Jews and Palestinians in the United States and in the Middle East.

It is likely to bring a sigh of relief to Jewish groups in Israel and the United States that lobbied Presbyterians against divestment, and to dismay the international movement known as B.D.S. — Boycott, Divest and Sanctions — which advocates using economic leverage to pressure Israel to return occupied land to the Palestinians.

In 2012, the General Assembly voted “to toss out the divestment measure and replace it with a resolution to encourage ‘positive investment’ in the occupied territories.”

The anti-divestment playbook was very much in evidence in Detroit last week. Hanging over the commissioners as they debated and finally voted, were passionate pleas not to divest, from commissioners who were terribly afraid that relations with their Jewish friends would be damaged.

This should have been evident to those observing and voting in Detroit’s Cobo Center. It was certainly evident to those of us who spent many hours on Friday watching proceedings on a public live internet feed.

One young commissioner was so emotional over the impact of the divestment vote on employees he knew personally who worked for Caterpillar, that he could hardly speak. The presiding officer had to gently tell him his time had expired.

That is the pro-Israeli playbook: Step One, tap into the personal feelings of commissioners where they “live”, American workers and Jewish neighbors.  Step Two: hit the internal mute button on the suffering caused by the occupation.

The internal mute button kept the occupation out of most of the GA discussion, except for the occasional testimony from commissioners who have visited the occupied areas.

One commissioner, Paul Tallarico, moderator of the Presbytery of the Palisades in New Jersey, spoke from the floor and told of visiting a Palestinian shop keeper just off Bethlehem Square.

In their conversation, Tallarico said to the shop-keeper, “I know how you feel”. The shopkeeper asked him where he lived.. Tallarico answered, “in the United States”.  The shopkeeper responded, “Then you don’t know how I feel. I live in a prison all of the time”.

There was a poignant authenticity in that exchange. Did it change votes inside Cobo Center? Only the voting commissioners know.  But what it does do is to highlight the stark contrast between the pro-Israel playbook narrative, which keeps the discussion focused on American “feelings” and keeps it away from the sufferings of those who live under a tight military occupation.

There were many non-voting “observers” inside Cobo Hall, many of them people of all ages who belong to Jewish organizations opposed to the occupation.

The picture at top of this posting captures one of those “observers”, Robert Ross, as he reacts joyfully and in amazement just as the final divestment victory vote is posted on the big screen behind the podium. The picture is from the New York Times.

The battle is joined in this moment of victory against the occupation.

It will be a long battle. Not only will it be against the pro-Israel forces deeply embedded in all church bodies, but it will be a battle against an Israeli government that genuinely hates any criticism of their control of the occupied territories.

In its story on the anti-divestment vote, the Voice of America web site reported:

In a statement posted Friday night on its Facebook page, the Israeli Embassy in Washington called the resolution “shameful.”

“Voting for symbolic measures marginalizes and removes its ability to be a constructive partner to promote peace in the Middle East,” the statement said. “We would have hoped that (the Presbyterian church) would have joined us in promoting peace and denouncing terrorism.”

Mount up, you Methodists and you other five denominations in the Big Seven church bodies, the PCUSA has shown you how to fight the occupation. It has also shown you what you are up against.  It will not be easy.

When you think about the hard fight ahead, remember that Bethlehem shop keeper whose words are now in the hearts and minds of all who heard him quoted on the floor of the  2014 PCUSA General Assembly.

‘Then you don’t know how I feel. I live in a prison all of the time’.”

Words to fight by.

From 1972 through 1999, James M. Wall was editor and publisher of the Christian Century magazine, based in Chicago, lllinois. He was a Contributing Editor of the Century from 1999 until July, 2017. He has written this blog, wall writings.me, since it was launched April 27, 2008. If you would like to receive Wall Writings alerts when new postings are added to this site, send a note, saying, Please Add Me, to jameswall8@gmail.com Biography: Journalism was Jim's undergraduate college major at Emory University, Atlanta, Georgia. He has earned two MA degrees, one from Emory, and one from the University of Chicago, both in religion. He is an ordained United Methodist clergy person. He served for two years in the US Air Force, and three additional years in the USAF reserve. While serving on active duty with the Alaskan Command, he reached the rank of first lieutenant. He has worked as a sports writer for both the Atlanta Journal and Constitution, was editor of the United Methodist magazine, Christian Advocate for ten years, and editor and publisher of the Christian Century magazine for 27 years. James M Wall died March 22, 2021 at age 92. His family appreciates all of his readers, even those who may have disagreed with his well-informed writings.
View all posts by wallwritings →
This entry was posted in Media, Middle East, Middle East Politics, Presbyterian Church, Religious Faith. Bookmark the permalink.