On Thursday of last week, President Barack Obama spoke to a group of Democratic senators in a private meeting during a Baltimore hotel political retreat.

He asked the senators not to support a bill, drafted by Senators Robert Menendez (D-NJ) (left) and Mark Kirk (R-IL), which would add further sanctions on Iran during this time of delicate nuclear negotiations between the U.S., its allies and Iran.

One unnamed senator in the room told the New York Times that Obama said that “as a former senator himself, he understood how outside forces — like special interests and donors — can influence senators to act”.

The president urged the lawmakers to “take the long view rather than make a move for short-term political gain”. Seated in front of the podium, Senator Menendez stood up to say he took “personal offense” at the president’s remark.

The New Jersey Democrat told the president that he (Menendez) had worked for more than 20 years to curb Iran’s nuclear ambitions and had always been focused on the long-term implications.

What “special interests and donors” did the President have in mind that caused Senator Menendez to take “personal offense”?

The unnamed source did not say. Neither did the New York Times. CNN, which credited the Times as its source for the reference to “special interests and donors” also refrained from identifying the “special interests” that brought Senator Melendez out of his chair.

As Dana Carvey’s  Church Lady  on Saturday Night Live, might have said in one of her church chats: 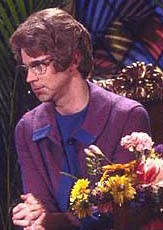 donors could he possibly mean? Let’s see now, Senator Menendez, President Obama, Israel and Iran. Is there a naughty connection here? Is Satan lurking about? Now, isn’t that special.”

President Obama talks about negotiating with Iran and reminds a group of senators that from personal experience, he understands “donors have influence”, a remark to which Senator Menendez took “personal offense”.

It is a strong possibility that the Church Lady was on  to something, and President Obama was speaking of Israel’s influence on the U.S. Congress. Israel is well known as the world’s major power demanding that the U.S. force Iran out of nuclear power development.

Still, as Phillip Weiss perceptively noted in his posting on the closed door Baltimore meeting, the New York Times could not bring itself to mention Israel in the story.

Deeply engrained in the Times‘ collective psyche, is the mandate to avoid like the plague any implication that Israelis (never say “the Jews”) control the U.S. Congress.

Members of Congress know that Israel is the fourth largest nuclear arms power in the world. Every member of Congress also knows to never, ever, acknowledge that Israel has a nuclear arsenal, with between 200 and 800 nuclear war heads, tucked away in its Dimona desert location.

Israel’s nuclear arsenal, and the excessive power of the Jewish Lobby, are terms not up for discussion, nor even hinted at by anyone who expects a long political career. President Obama knew that the day he entered politics.

The Israel Lobby and U.S. Foreign Policy by Obama’s University of Chicago colleague John Mearsheimer, and Harvard’s Stephen M. Walt, was in print a year before Obama launched his first campaign for president in 2007.

Michael F. Brown, Institute for Middle East Understanding wrote a review of The Israel Lobby for The Electronic Intifada in September 2007.

One line from that review shows an optimism of the book’s authors, that is unfortunately, still far from fruition:

“Indeed, perhaps the most powerful section of the book is when the authors highlight cases in which significant parts of the lobby have leveled the anti-Semitism charge at individuals guilty of nothing more than challenging the human rights record of Israel.

Due to such overuse, they write, “There are signs that the reflexive charge of anti-Semitism is beginning to lose its power to stifle debate.”

The Times, which strives daily to avoid any smidgen of  “anti-Semitism”, fills its columns with political and economic speculations, but it will not allow into the debate the mere speculation that President Obama linked U.S. senators to the “deep pocket influence” of  the Israel Lobby.

Senator Menendez will have the president know he has spent 20 years as a U.S. senator opposing Iran’s growing strength as a Middle East power because of a personal conviction, not because the Israel Lobby wants him to remain a loyal and devoted supporter of a foreign power, Israel.

Senator Kirk, who served as a U.S. House representative from Illinois before his election to the Senate, has received a lifetime contribution total of $339,386, from pro-Israel PACs, through 2014.

Meanwhile, a revised Kirk-Menendez bill is back for consideration in the new Republican-controlled Senate.

The vote trading and warnings, if we are to believe Democratic Senator Robert Menendez of New Jersey, will not be about the money from pro-Israel donors. It will be, the senator tells us, because of his “personal convictions”.

From 1972 through 1999, James M. Wall was editor and publisher of the Christian Century magazine, based in Chicago, lllinois. He was a Contributing Editor of the Century from 1999 until July, 2017. He has written this blog, wall writings.me, since it was launched April 27, 2008. If you would like to receive Wall Writings alerts when new postings are added to this site, send a note, saying, Please Add Me, to jameswall8@gmail.com Biography: Journalism was Jim's undergraduate college major at Emory University, Atlanta, Georgia. He has earned two MA degrees, one from Emory, and one from the University of Chicago, both in religion. He is an ordained United Methodist clergy person. He served for two years in the US Air Force, and three additional years in the USAF reserve. While serving on active duty with the Alaskan Command, he reached the rank of first lieutenant. He has worked as a sports writer for both the Atlanta Journal and Constitution, was editor of the United Methodist magazine, Christian Advocate for ten years, and editor and publisher of the Christian Century magazine for 27 years. James M Wall died March 22, 2021 at age 92. His family appreciates all of his readers, even those who may have disagreed with his well-informed writings.
View all posts by wallwritings →
This entry was posted in Iran, Israel, Middle East, Obama. Bookmark the permalink.

4 Responses to Obama to Senators: Choose U.S. Over Donors