Barack to Bibi: Stop “Meddling” In Our Politics 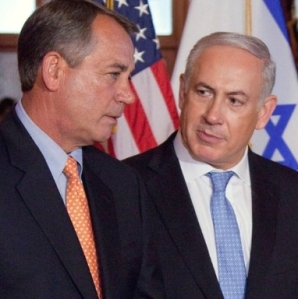 An unidentified senior American official said that Obama warned Netanyahu “not to meddle in the battle” Obama was “waging against Congress over the sanctions legislation”.

Ha’aretz, reported the firmness with which Obama addressed Netanyahu:

“Obama stressed to Netanyahu that he is seeking to reach an agreement with Iran that will prevent it from obtaining nuclear weapons and assure the international community in a verifiable fashion that Iran’s nuclear program is for peaceful purposes only,

It is unprecedented for a House speaker to invite a foreign leader to speak to the Congress without prior consultation and agreement with the President of the United States.

Nevertheless, the Speaker readily agreed when Netanyahu asked Boehner to shift the invitation to speak to the Congress from February 11 to March 3, only two weeks before Israel’s March 15 elections where Netanyahu faces strong opposition.

Netanyahu has a second reason to ask Boehner to move the date of his speech. According to Boehner, Netanyahu wanted to give his speech to the U.S. Congress during the time of the pro-Israel AIPAC conference in Washington, March 1.

After consorting with American-born Israeli Ambassador Dermer, Boehner issued his initial invitation to Netanyahu behind Obama’s back.

Again, ignoring his own president, Speaker Boehner quickly agreed to the new AIPAC-friendly date of March 3.

With this change, the Netanyahu-Boehner tag team (pictured above) achieves two Netanyahu goals: one, schmoozing with his AIPAC congressional funders while two, basking in the politically enhancing glow of all that congressional cheering.

This will be speech number three that Netanyahu delivers to a U.S. Congress, tying him with only one other world leader, Britain’s Winston Churchill who had delivered three speeches from the podium where U.S. presidents deliver their annual State of the Union addresses.

For its part, showing more diplomatic restraint than Netanyahu, the White House reacted to the Netanyahu-Boehner congressional insult by announcing that President Barack Obama would not meet with Netanyahu during his visit.

The official White House rationale was simple: “As a matter of long-standing practice and principle, we do not see heads of state or candidates in close proximity to their elections.”

The White House also announced that Secretary of State John Kerry will not meet with Netanyahu. Vice President Joe Biden is also expected to ignore the Israeli leader, giving Netanyahu a trifecta snub.

What cares Netanyahu about diplomatic slights? He is fighting for his political life in Israel’s March 15 elections. If his party wins and reinstates him as prime minister, Bibi is looking toward to at least two years with an overly friendly Republican controlled congress.

His political motto is simple: Will travel anywhere for votes, even to grief-stricken events.

On January 7, masked gunmen killed 12 people in a Paris attack on the French satirical weekly newspaper Charlie Hebdo. It was among the deadliest such attacks in postwar France.

In response to the massacre, the French planned a “rally against terror”. The French government invited world leaders to participate in a march, while also sending word  to both Prime Minister Netanyahu and Palestinian president Mahmoud Abbas not to attend.

A French official explained that French President Francois Hollande “wanted the event to focus on demonstrating solidarity with France, and to avoid anything liable to divert attention to other controversial issues, like Jewish-Muslim relations or the Israeli-Palestinian conflict.”

One French source noted that one “French concern – not conveyed to representatives of the Israeli government – was that Netanyahu would take advantage of the event for campaign purposes and make speeches, especially about the Jews of France.”

Such obvious political moves would be contrary to the French government’s desire to have the march promote a European solidarity as part of “dealing with the terror attacks.”

The same “please stay away” message was sent to President Abbas. Both Abbas and Netanyahu agreed to “stay away”. Each issued cover stories that they would not attend.

The night before the Paris march, Israeli Foreign Minister Avigdor Lieberman and Economy Minister Naftali Bennett announced they would go to Paris to take part in the march and meet with members of the Jewish community.

Netanyahu quickly informed the French he would also come to Paris for the march and meetings with Jewish groups.

With Netanyahu on his way to Paris, the French quickly invited Abbas a second time. Abbas accepted.

What followed early in the Paris march resembled a Buster Keaton silent street comedy. President Abbas was marching on the front row, absorbing full television camera attention, while Prime Minister Netanyahu was several rows back in the crowd.

But not for long. Yahoo News reported that Netanyahu literally pushed his way to the front of the line,

The picture below catches the leader of the modern state of Israel looking like Buster Keaton, barely concealing a poker face of innocence after pushing his way forward.

In Washington, on March 3, there will be no competition to Israeli Prime Minister Benjamin Netanyahu. He will not need to push. Speaker Boehner has already done that for him.

The pictures above are from Ha’aretz and AP.

From 1972 through 1999, James M. Wall was editor and publisher of the Christian Century magazine, based in Chicago, lllinois. He was a Contributing Editor of the Century from 1999 until July, 2017. He has written this blog, wall writings.me, since it was launched April 27, 2008. If you would like to receive Wall Writings alerts when new postings are added to this site, send a note, saying, Please Add Me, to jameswall8@gmail.com Biography: Journalism was Jim's undergraduate college major at Emory University, Atlanta, Georgia. He has earned two MA degrees, one from Emory, and one from the University of Chicago, both in religion. He is an ordained United Methodist clergy person. He served for two years in the US Air Force, and three additional years in the USAF reserve. While serving on active duty with the Alaskan Command, he reached the rank of first lieutenant. He has worked as a sports writer for both the Atlanta Journal and Constitution, was editor of the United Methodist magazine, Christian Advocate for ten years, and editor and publisher of the Christian Century magazine for 27 years. James M Wall died March 22, 2021 at age 92. His family appreciates all of his readers, even those who may have disagreed with his well-informed writings.
View all posts by wallwritings →
This entry was posted in Israel, Middle East Politics, Netanyahu, Obama. Bookmark the permalink.

10 Responses to Barack to Bibi: Stop “Meddling” In Our Politics