At War With Those “Who Have Perverted Islam” 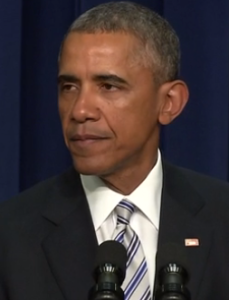 During a speech at this week’s White House  conference on countering violent extremism, President Obama described the enemy that calls itself ISIL:

That statement is sensible and it is clear. It represents the President’s careful separation of ISIL (initially self-designated as the Islamic State in the Levant) from the world’s Muslim population.

ISIL is not remotely representative of Islam. It steals its language the way extremists out of Jewish and Christian backgrounds pervert those religious communities.

ISIL is not Islamic, it is a gang of thugs who have perverted the historic Islamic faith to kill, rape and destroy, in a murderous rampage seeking political dominance.

ISIL’s gang has thus far recruited 20,000 fighters, not 200,000, as GOP presidential aspirant Jeb Bush recently stated in his initial venture into foreign policy speech making, a number he later reduced to the correct 20,000.

Simplistic hate is ISIL’s mantra; a video that trumpets that mantra is the media’s favorite message.

In the U.S., ISIL has simplistic-minded political allies who dislike anything said by President Obama, and are eager to denounce him at every opportunity.  The latest ISIL  political ally to surface is Rudy Giuliani, former mayor of New York City, and an unsuccessful candidate for the Republican nomination for president in 2008.

The New Yorker’s Jeffrey Toobin wrote in his essay, “The Paranoid Style of Rudy Giuliani”  that since 2008, Giuliani “has become a national embarrassment of a distinctive type”.

The former mayor’s most recent embarrassing remark came at an event in New York this week which was a part of Wisconsin governor Scott Walker’s nascent Presidential campaign.

Responding to President Obama’s careful separation of the world’s Muslim population from ISIL, Giuliani said during a dinner at the “21” Club, according to Politico“

You got this much right, Rudy, it was a horrible thing to say.  Even candidate Walker, who wanted the spotlight on himself, not Giuliani, remained silent on his guest’s remarks.

Elaborating in an interview on Fox News, instead of admitting he had misspoken, Giuliani kept up his tirade:

“President Obama was brought up in an atmosphere in which he was taught to be a critic of America. That is a distinction with prior American Presidents.”

Giuliani would have the clock turn back to those Cold War days when things were simple from the perspective of those Americans Richard Hofstadter called in 1964, the “paranoid right wing”.

Jeffrey Toobin provides a series of Giuliani attacks, all of which are distortions of the truth.

Giuliani’s attacks on the President are not principally meant as assertions of fact. They are meant to tap into a deep wellspring of American political thought, one defined by the Columbia historian Richard Hofstadter five decades ago.

“Hofstadter described ‘the paranoid style in American politics,’ which he said was characterized by “heated exaggeration, suspiciousness, and conspiratorial fantasy’. Looking back, Hofstadter pointed to the anti-Masonic movement and the nativist and anti-Catholic movement as examples, but he also ascribed the paranoid style to his own era.”

In his Harper’s article, Hofstadter wrote:

“The modern right wing . . . feels dispossessed: America has been largely taken away from them and their kind, though they are determined to try to repossess it and to prevent the final destructive act of subversion.

The old American virtues have already been eaten away by cosmopolitans and intellectuals; the old competitive capitalism has been gradually undermined by socialistic and communistic schemers; the old national security and independence have been destroyed by treasonous plots, having as their most powerful agents not merely outsiders and foreigners as of old but major statesmen who are at the very centers of American power.

Their predecessors had discovered conspiracies; the modern radical right finds conspiracy to be betrayal from on high.”

Hofstadter wrote these words in 1964.

The paranoid right Hofstadter described, emerges in every political generation. Rudy Giuliani, this generation’s right wing spokesman, at least in this current news cycle, reports, inaccurately, as usual, that President Obama is someone not raised in this country.

Therefore, it follows, from Giuliani’s ill-informed, paranoid, perspective, that the President does not “love America”.

That is sheer gobbledegook, nonsense designed to deceive. But it plays well to the political right, and it gets extensive attention in right wing media outlets like Fox News, reaching precisely ISIL’s target audience

Giuliani added to his gobbledegook with an additional “denial of racial prejudice” comment, as reported in the New York Times, that  “his criticism of Mr. Obama’s upbringing should not be considered racist because the president was raised by “a white mother.”

Congratulations, Mr. former Mayor, you are carrying the water ISIL wants you to carry to America, which Hofstadter defined as “heated exaggeration, suspiciousness, and conspiratorial fantasy”.

The picture of President Obama above, is a screen shot from a CNN video at http://www.cnn.com/2015/02/17/politics/isis-obama-extremism-summit/index.html. The picture of former Mayor Giuliani is a Getty image by Chip Somodevilla, from the New York Times.

From 1972 through 1999, James M. Wall was editor and publisher of the Christian Century magazine, based in Chicago, lllinois. He was a Contributing Editor of the Century from 1999 until July, 2017. He has written this blog, wall writings.me, since it was launched April 27, 2008. If you would like to receive Wall Writings alerts when new postings are added to this site, send a note, saying, Please Add Me, to jameswall8@gmail.com Biography: Journalism was Jim's undergraduate college major at Emory University, Atlanta, Georgia. He has earned two MA degrees, one from Emory, and one from the University of Chicago, both in religion. He is an ordained United Methodist clergy person. He served for two years in the US Air Force, and three additional years in the USAF reserve. While serving on active duty with the Alaskan Command, he reached the rank of first lieutenant. He has worked as a sports writer for both the Atlanta Journal and Constitution, was editor of the United Methodist magazine, Christian Advocate for ten years, and editor and publisher of the Christian Century magazine for 27 years.
View all posts by wallwritings →
This entry was posted in Jeb Bush, Middle East, Middle East Politics, Obama. Bookmark the permalink.

11 Responses to At War With Those “Who Have Perverted Islam”