Thirteen Senators Who Could Make History

Most U.S. media attention is focused this summer on Donald Trump and the latest outbreak of domestic violence in movie theaters. But look carefully at the internet and you will find Roland Nikles reporting for Mondoweiss on a story of far-ranging significance.

“Israel and the United States (and the other members of the P5+1) have conflicting interests at stake when it comes to the Iran deal. Meanwhile, many in Congress are behaving like they represent Benjamin Netanyahu instead of the American people.

The P5+1 have negotiated with Iran in order to take an Iranian nuclear bomb off the table indefinitely, and to prevent a nuclear arms race in the region.

In an analysis for Forward, Nathan Guttman, writes: “Thirteen U.S. Senators is all President Obama needs to ensure that the nuclear deal with Iran does not get derailed by Congress”.

There are currently 54 Republican senators, all of whom are expected to oppose the deal.  The Republicans will need only 13 Democrats to cross party lines and vote against the deal to reach the 67 votes required for an override.

Among the 34 undecided Democratic senators (including two Independents) Obama needs to sustain the deal, the Republican majority needs to pick off thirteen Democrats to vote against the diplomatic option.  If they successfully add thirteen more Democrats to their side, the deal is dead.

“With Republicans controlling both the House and the Senate, Congress is likely to reject the Iran deal. Not one Republican has expressed support for the deal. But that is only the first round. Obama has already made clear his intention to veto any legislation rejecting the Iran deal.

If that happens, Republican leaders will have to come up with a two-thirds majority in both chambers to override Obama’s veto. Most analysts focus on the Senate, where Republicans are expected to have a tougher time getting this super-majority.

There are currently 54 GOP senators, so Republicans will need 13 Democrats to cross party lines and vote against the deal to reach the 67 votes required for an override.

Political analysts have identified between 14 and 28 Democratic senators in the undecided column.

These include security hawks such as Virginia’s Mark Warner and Tim Kaine, or Michigan’s Gary Peters, as well as others who have been skeptical about Iran’s intentions from the get-go, and several senators with significant Jewish constituencies, including Florida’s Ben Nelson, Cory Booker of New Jersey and New York’s Chuck Schumer (pictured above), who is currently viewed as the biggest prize on the Senate floor.”

Guttman acknowledges that the security hawks in the Democratic caucus, all of whom have strong emotional ties to Israel, are dead set against the deal, falling in line behind Israel’s Prime Minister Benjamin Netanyahu.

The Republicans need 13 of those 28 undecided Democrats to cross over and vote against the deal.

“Advocates believe that Schumer’s decision, thanks to his senior position in the Democratic Party (he is slated to take over as majority leader next year) and to his standing in the Jewish community, could play a significant role in influencing other undecided Democrats.”

Undecided senators, including Schumer, will be watched carefully in the weeks leading to the final vote on the deal. Among the undecided Democratic senators, 13 could scuttle the Iran deal by crossing party lines.

Below are the thirteen U.S. Democratic senators identified by Forward as undecided on how they will vote on the Iran diplomatic deal. Some of the thirteen have not commented on the deal, others are studying it.

The Democratic undecided senators below are identified by state. The Forward offers their current position on the vote. All are needed to sustain Obama. Voters in their states still have time to communicate to Senate offices locally or in Washington. 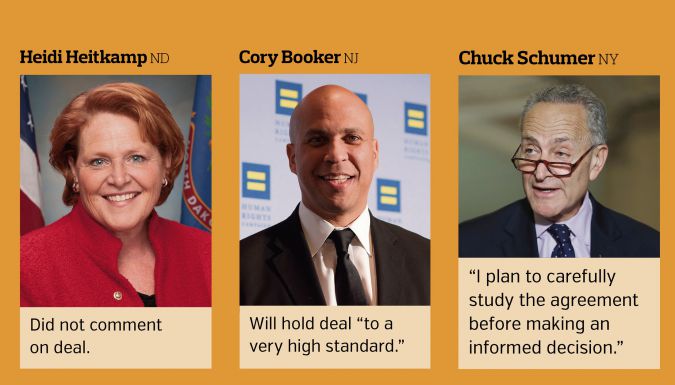 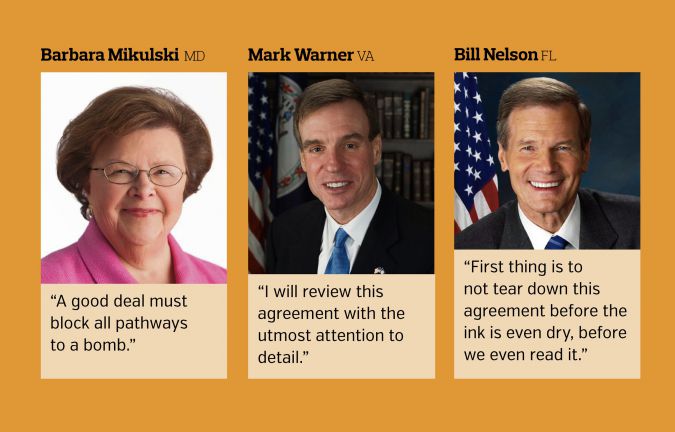 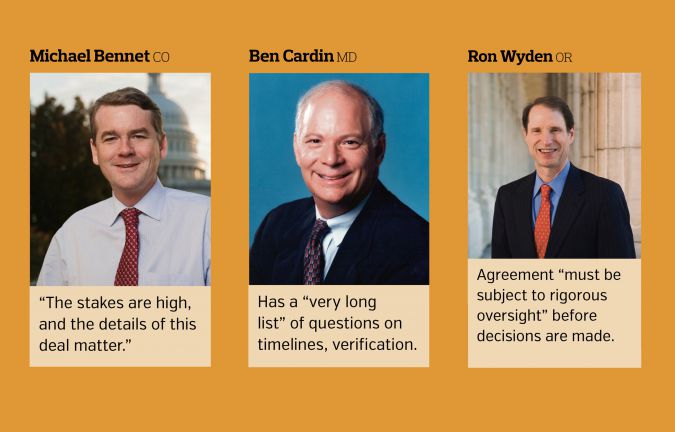 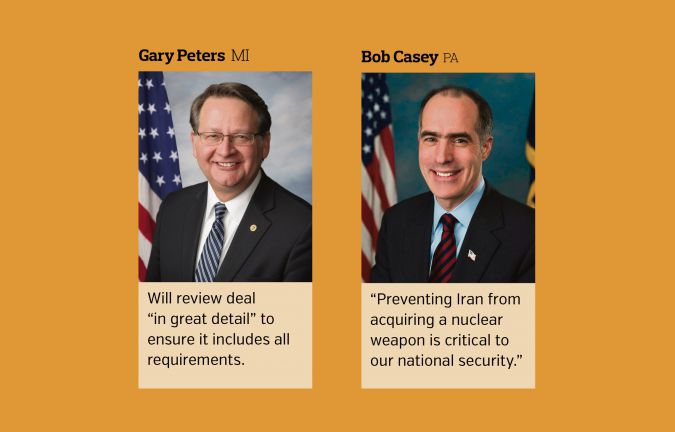 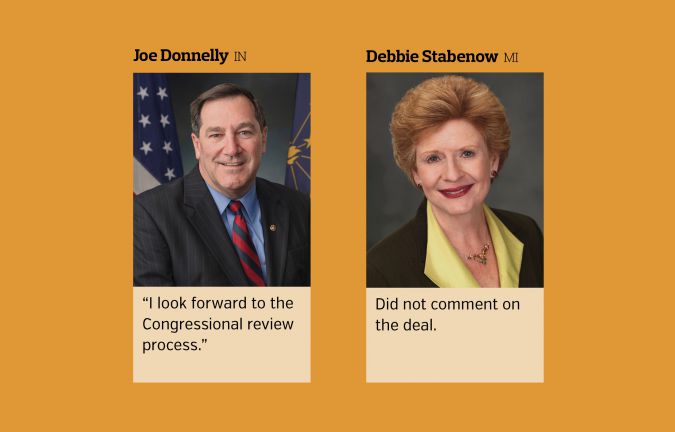 The graphic of the thirteen senators is from the Forward http://forward.com/news/national/317812/iran-deals-undecideds/

From 1972 through 1999, James M. Wall was editor and publisher of the Christian Century magazine, based in Chicago, lllinois. He was a Contributing Editor of the Century from 1999 until July, 2017. He has written this blog, wall writings.me, since it was launched April 27, 2008. If you would like to receive Wall Writings alerts when new postings are added to this site, send a note, saying, Please Add Me, to jameswall8@gmail.com Biography: Journalism was Jim's undergraduate college major at Emory University, Atlanta, Georgia. He has earned two MA degrees, one from Emory, and one from the University of Chicago, both in religion. He is an ordained United Methodist clergy person. He served for two years in the US Air Force, and three additional years in the USAF reserve. While serving on active duty with the Alaskan Command, he reached the rank of first lieutenant. He has worked as a sports writer for both the Atlanta Journal and Constitution, was editor of the United Methodist magazine, Christian Advocate for ten years, and editor and publisher of the Christian Century magazine for 27 years. James M Wall died March 22, 2021 at age 92. His family appreciates all of his readers, even those who may have disagreed with his well-informed writings.
View all posts by wallwritings →
This entry was posted in Iran, Israel, Middle East Politics, Netanyahu, Obama, Palestinians. Bookmark the permalink.

6 Responses to Thirteen Senators Who Could Make History