That UN Vote: “How are the mighty fallen” 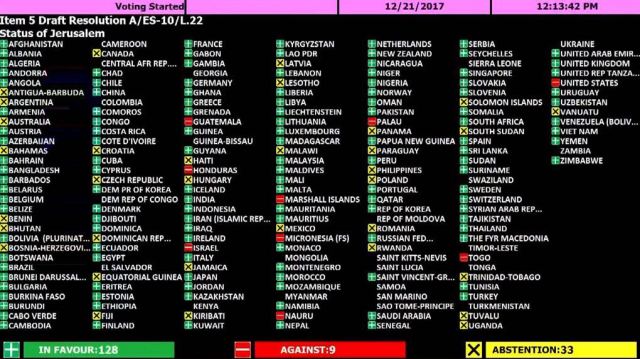 For those keeping score on the Trump Administration versus the United Nations, the final vote on the Status of Jerusalem resolution is recorded above.

The official count was 128 to 9 against U.S. President Donald Trump’s recognition of Jerusalem as the Israeli capital, and his pledge to move the U.S. embassy to Jerusalem.

Thirty-five nations abstained, and 21 countries did not cast a vote. The eight countries voting with the United States were Israel, Guatemala, Honduras, Marshall Islands, Micronesia, Nauru, Palau and Togo.

On Thursday, the day of the vote, Israeli Prime Minister Benjamin Netanyahu was busy dedicating a hospital in the coastal city of Ashdod. He responded to the UN vote pretty much the way former Judge Roy Moore responded to his recent defeat in Alabama’s election for a U.S. Senate seat. He rejected it.

Prior to the vote which rejected the U.S. President’s “gift” of Jerusalem to Israel, the U.S. Representative to the UN, Nikki Haley (below), warned nations that votes against the U.S. would be remembered. She added, “We will take names,” sounding more like a Mafia Don than a diplomat.. 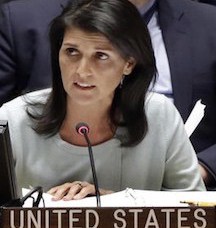 He added that the Palestinians “will not be threatened,” and that the United States had insisted on “ignoring the dangerous repercussions of its decision.”

Ha’aretz reported on Netanyahu’s reaction to the vote:

In a major diplomatic blow to Israel and Trump, the UN General Assembly passed a resolution rejecting the American recognition of Jerusalem as Israel’s capital, with 128 member states voting in favor of the resolution and a mere nine voting against it.

“Jerusalem is our capital, always was and always will be. But I do appreciate the fact that a growing number of countries refuse to participate in this theater of the absurd,” Netanyahu charged in a live Facebook video.

The Times also notes that the UN vote “deepened Mr. Trump’s isolation over the issue”. It also “threatened to alienate Arab allies of the United States and may have further complicated prospects for a two-state solution to the Israeli-Palestinian conflict”.

As for the impact of the vote on the U.S., the Times concludes: “The overwhelming rejection of the American shift of position on Jerusalem, on the world’s biggest diplomatic stage, was a setback for a president who is still looking for a major foreign achievement after nearly a year on the job.

If you are wondering where to find Ashdod and its newly dedicated hospital on an Israeli map, Ashdod is located 13.6 miles north of Ashkelon along Route 4.

Readers familiar with 2 Samuel 1:19-20, will recall Ashkelon as one of two cities cited by David on the day he learned of the deaths of Saul and Jonathan:

“How are the mighty fallen!” is a statement that ranges far beyond Gath and Ashkelon. And it is repeated throughout the centuries as empires stumble and fall.

The UN General Assembly resolution states the world’s overwhelming opinion on the future of Jerusalem, a city sacred to three major religions: Christianity, Judaism and Islam.

Rebecca Vilkomerson, Executive Director of the U.S.-based Jewish Voice for Peace, summed up the significance of the UN resolution:

Despite threats from the Trump administration, the UN General Assembly vote today showed once again that the U.S. and Israel are increasingly isolated from the global consensus regarding Israel’s appalling disregard for Palestinian rights.

She concluded: “We commend those countries that stood up to U.S. pressure, which could not obscure the urgency of speaking out against the recklessness and injustice of declaring Jerusalem the capital of Israel.”

Winning is one of Donald Trump’s favorite words. By a vote of 128 to 9, this week he was not a winner. He was a loser at home and on the world stage. So, sad to say, was the nation that elected him President.

The recorded vote tabulation at top is a screen shot. To enlarge it, click on the photo once. The picture of Ambassador Haley is a UN photo.

From 1972 through 1999, James M. Wall was editor and publisher of the Christian Century magazine, based in Chicago, lllinois. He was a Contributing Editor of the Century from 1999 until July, 2017. He has written this blog, wall writings.me, since it was launched April 27, 2008. If you would like to receive Wall Writings alerts when new postings are added to this site, send a note, saying, Please Add Me, to jameswall8@gmail.com Biography: Journalism was Jim's undergraduate college major at Emory University, Atlanta, Georgia. He has earned two MA degrees, one from Emory, and one from the University of Chicago, both in religion. He is an ordained United Methodist clergy person. He served for two years in the US Air Force, and three additional years in the USAF reserve. While serving on active duty with the Alaskan Command, he reached the rank of first lieutenant. He has worked as a sports writer for both the Atlanta Journal and Constitution, was editor of the United Methodist magazine, Christian Advocate for ten years, and editor and publisher of the Christian Century magazine for 27 years.
View all posts by wallwritings →
This entry was posted in Middle East, Middle East Politics, Netanyahu, Obama, Palestinians, Religion and politics, Uncategorized, United Nations. Bookmark the permalink.

6 Responses to That UN Vote: “How are the mighty fallen”