US Churches Must Stop Following Israel Down the Trauma Trail

Posted on October 5, 2009 by wallwritings 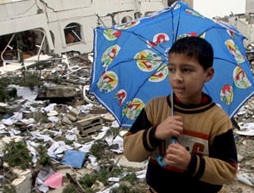 Avraham Burg , former Israeli Chairman of the Jewish Agency and former Speaker of the Israeli Knesset, has written a book with the provacative title, The Holocaust is Over; We must Rise from Its Ashes.

In a PBS interview with Charlie Rose, Burg told Rose why he wrote the book.

Burg: By everything, but mainly the Holocaust. It goes like this. Whenever there is a victim in Israel, whenever somebody is killed in a terror activity or whatever it is, that’s one victim on top of seven wars, on top of 6 million, on top of 2,000 years of problems. So it always the history, nothing is just contemporary state of affairs.

In his book and in his conversation with Rose, Burg, a well-known figure in Jewish political life, offers his explanation as to what leads otherwise rational, compassionate people to cling tightly to the certainty that the 1948 “invasion of Arab armies” grants permission to the state of Israel to use whatever methods are at hand to defend their “newborn Jewish state”.

American churches are filled with “otherwise rational, compassionate people” who remain oblivious to the reality that they are sponsors of Israel’s Occupation of Gaza and the West Bank.  They are a people who are living in the darkness of their ignorance.

Fortunately, Burg is not alone in calling for an end to this ignorance. Right here, on this very modern computer you are reading, you are just one click away from Mondoweiss.

Mondoweiss is a website committed to a pursuit of social justice from a Jewish perspective, both religious and cultural. Under the watchful eye of veteran New York journalist Phillip Weiss, the site conducts a lover’s quarrel with Judaism and Israel, deploring the bad and praising the good.

Pay attention, folks, Mondoweiss has a message for all of us.

Recently, Mondoweiss writer Susie Kneedler turned the site’s attention to a statement issued by leaders of the Christian community.

She harshly criticized the statement from the National Council of Churches and Churches for Middle East Peace, which calls for “bold American leadership to end the conflict” in the Middle East.

What constitutes “bold” action by the US government for these Christian leaders?  Here is a sample:

Both sides must take steps to move the process forward, and we support the President’s efforts to end Israeli settlement growth, to halt Palestinian violence and incitement. It is now time to move to the next stage of diplomacy and to address the tough issues that must be resolved to bring this conflict to an end. (emphasis added).

Appalled at the statement, which any serious student of the conflict will immediately recognize as a pro-Israel statement, Kneedler asks:

Why do “concerned,” supposedly well-intentioned, people, not study the problem more? The American churches finally support the two-state solution when Israel has stolen so much Palestinian property that all Palestine is now crushed into a single state, yet the churches intone the reductive [Likud] mantra that, solemnly pronounces:

“We support the President’s efforts to end Israeli settlement growth, to halt Palestinian violence and incitement.” . . . .We heard more calls for reparations in one twelve-minute 60 Minutes segment about Bernard Madoff’s victims, than . . . “mainstream” [Christian] groups [have] ever [said] about the land that the Israeli government has taken from the people of Palestine.”

Three days after the the two Christian organizations were exposed as Lukidniks, a Mondoweiss posting by David Samel, a criminal defense attorney in New York City, reported on an event at New York’s Sarah Lawrence College.

Two Israeli women who had refused military service were the speakers.

Maya Wind and Netta Mishly of the Shministim, a group of young Israelis who refuse mandatory military service, and are often sentenced to repeated prison terms until they either change their minds or obtain a recognized deferment.

Maya and Netta both served several weeks in jail before being found mentally unfit for military service. To me, the phrase sounded like a declaration of sanity. . . .

. . . Maya and Netta observed that a country that requires mandatory military service and sends its young recruits into the Occupied Territories to exert authority over Palestinians will necessarily become a breeding ground for racism.

From an early age, Israelis are trained to rule over Arabs, who are viewed as inferiors to be dominated and distrusted. The corrosive effects of this socialization result in favorable election results for avowed racists like Lieberman, while those who actually view Palestinians as equal human beings are marginalized as extremists.

During the question and answer period,  Samel writes about an exchange between a member of the audience and the two women.  It was an exchange familiar to anyone who has ever spoken to an audience that includes supporters of both Palestine and Israel.

Questions from the audience were almost entirely favorable, but one notable exception was from a member of Rabbis for Human Rights.

The rabbi noted that he agreed with much of the presentation, but politely challenged Maya and Netta’s brief historical introduction, as he rehashed the old propaganda line blaming the outbreak of violence in 1948 on the invasion of Arab armies to destroy the newborn Jewish State.

The women chose not to engage in a lengthy debate with the rabbi, but pointed out that his version of history was far from undisputed. It was somewhat disappointing to see a genuinely concerned rabbi spouting such a simplistic and conventional view. It reminded me of Michael Lerner’s occasional forays into the realm of pure nonsense.

“A simplistic and conventional view” would also be an appropriate description of the manner in which Christian leaders have dealt with this issue.  The contrast between the two Israeli women and the collective wisdom of the NCCC and the CMEP is stark and sad.

Where does it come from, this conviction that leads otherwise moderate American Jews, and “concerned, supposedly well-intentioned” Christians, to cling so tightly to the Jewish narrative that the 1948 war was started by the “invasion” of Arab armies determined to “destroy the newborn Jewish state”?

The Ethnic Cleansing of Palestine, by Israel scholar Ilan Pappe, researched official Israeli government papers, and produced a book that rejects that conclusion as a myth with no foundation in reality.

Read it and you will have information to share with the next “concerned, supposedly well-intentioned” Christian you encounter. And you will understand why Pappe was booted out of his academic post in Israel and is now teaching in England.  Israel’s government needs to sustain the myth for its people and for its American cousins.

This involvement in the crime immediately created a deep collective guilt within the Christian community, a guilt encouraged and sustained by successive Israeli governments. Victims need allies to keep their victimhood alive.  Guilt-ridden Christians are easy targets.

This guilt and the ease with which the American Jewish community encouraged, and paid for, trips to the “Holy Land”, was one factor in developing a strong bond between Christians and Jews in the US, who do, after all, share part of scripture once known as the “Old Testament”, now renamed “the Hebrew scriptures” to avoid insulting one half of the Judeo-Christian bond.

That bond has virtually guaranteed that most Christians would agree to live by what Marc Ellis has so perceptively labeled, “the ecumenical deal”, the understanding that shared worship meetings and social justice battles would remain joint, so long as the Palestinian issue remained off the table.

Christian prophetic voices in the religious academy and the denominational leadership, rarely call on Christians to stop with this “both sides” foolishness. They just as rarely call down the wrath of God on Israel’s treatment of the Palestinian people. Poverty and health care reform are easier targets.

In this void of prophetic leadership, there are, fortunately, Jewish voices speaking out:

This conviction seems to emerge from a deep tribal need to cling to a narrative that has hardened into an historical myth that no amount of contemporary harsh reality can shake. It is this same myth that Israel has grafted onto the American psyche.

That “grafting” leads to an automatic US rejection of the important Goldstone Report.

We also forced Palestinian President Abbas to reject the Report, a shameful act on his part, and an even greater shameful act on our part for battering him down with our financial fist.

Ali Abunimah and Babil, a Palestinian news source, have the sordid details, which include the depressing report that, among other considerations, Abbas traded preservation of Palestine’s telephone service in return for agreeing to reject, under Israeli and US pressure, the Goldstone report.

Abbas is facing the wrath of his own public for his failure to endorse the Report.  On Monday (August 5), Palestinians poured into the streets of Ramallah to protest their government’s actions.

What price do we pay for letting Israel shape our Middle Eastern policy? We continue to repeat Israel’s lies to the world.

President Obama, if we are to believe the Washington Times, has assured Israel’s leaders that the “secret” of Israel’s own nuclear arsenal, never officially admitted and never opened to international inspection, will remain just that, our little “secret”.

This places the US in the position of demanding that Iran open its nuclear facilities to inspection, while continuing to deny that Israel has its own nuclear arsenal hidden away in a still not acknowledged site in Dimona, Israel.

US Christian churches must insist that our government stop blindly following Israel down the trauma trail.

The scriptures demand it. And if you won’t listen to the scriptures, try thumbing through your hymnbooks. You should be able to find these words from Harry Emerson Fosdick:

Save us from weak resignation,
To the evils we deplore.

Picture above of a Gaza child during the invasion, is from Al Jazeera

From 1972 through 1999, James M. Wall was editor and publisher of the Christian Century magazine, based in Chicago, lllinois. He was a Contributing Editor of the Century from 1999 until July, 2017. He has written this blog, wall writings.me, since it was launched April 27, 2008. If you would like to receive Wall Writings alerts when new postings are added to this site, send a note, saying, Please Add Me, to jameswall8@gmail.com Biography: Journalism was Jim's undergraduate college major at Emory University, Atlanta, Georgia. He has earned two MA degrees, one from Emory, and one from the University of Chicago, both in religion. He is an ordained United Methodist clergy person. He served for two years in the US Air Force, and three additional years in the USAF reserve. While serving on active duty with the Alaskan Command, he reached the rank of first lieutenant. He has worked as a sports writer for both the Atlanta Journal and Constitution, was editor of the United Methodist magazine, Christian Advocate for ten years, and editor and publisher of the Christian Century magazine for 27 years.
View all posts by wallwritings →
This entry was posted in Middle East, Religious Faith. Bookmark the permalink.